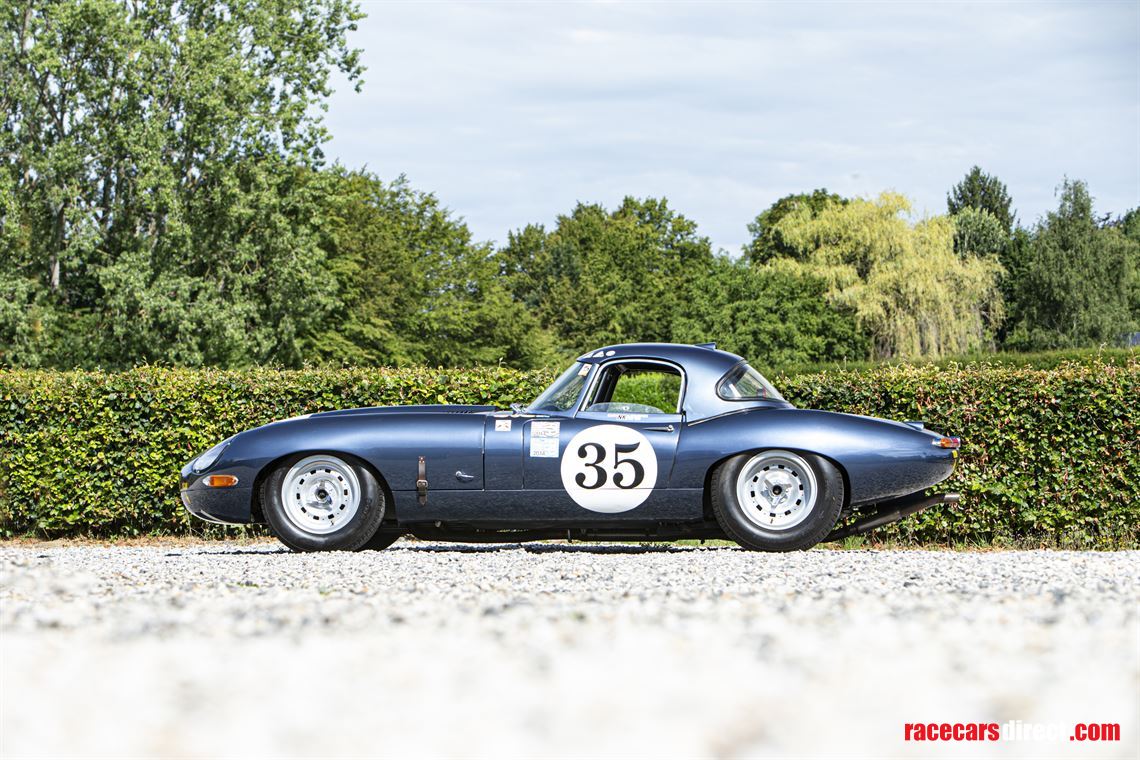 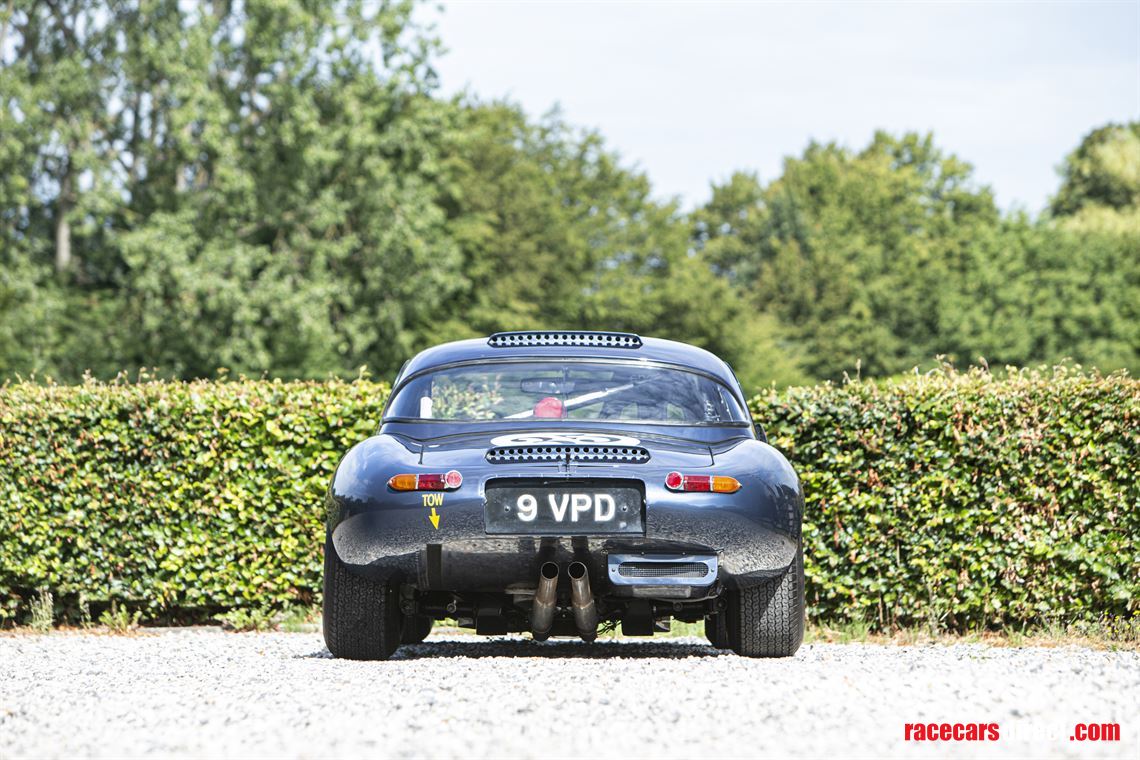 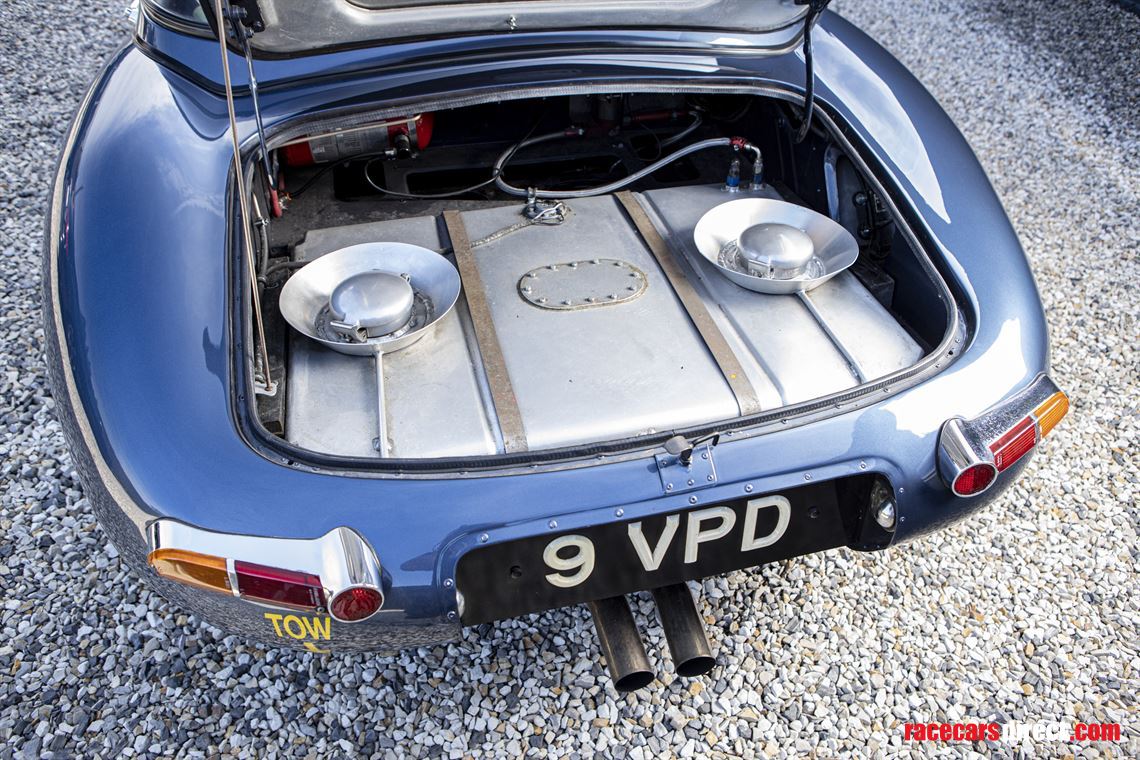 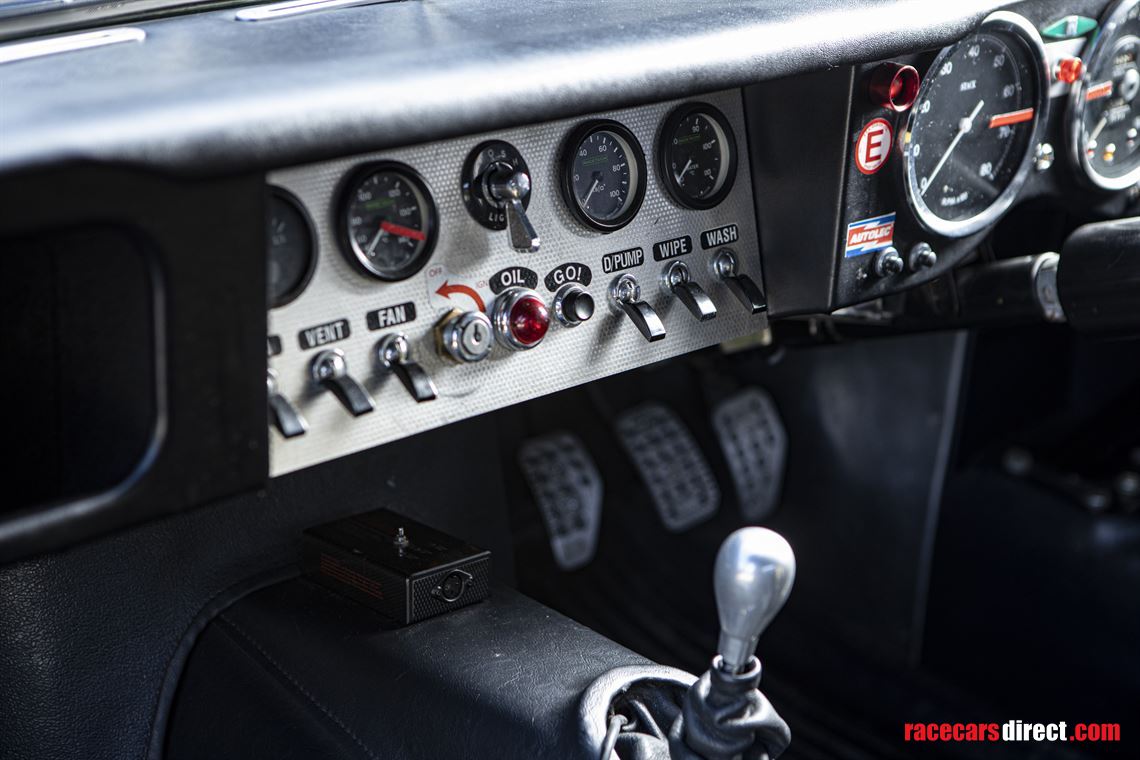 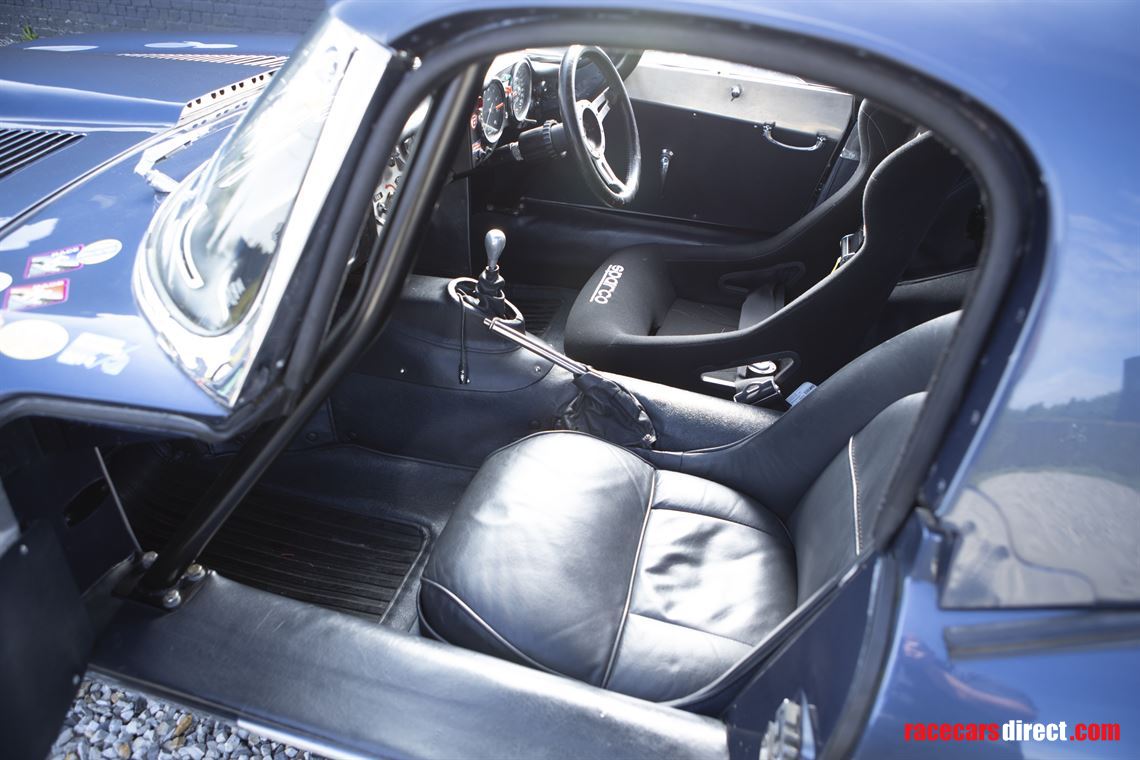 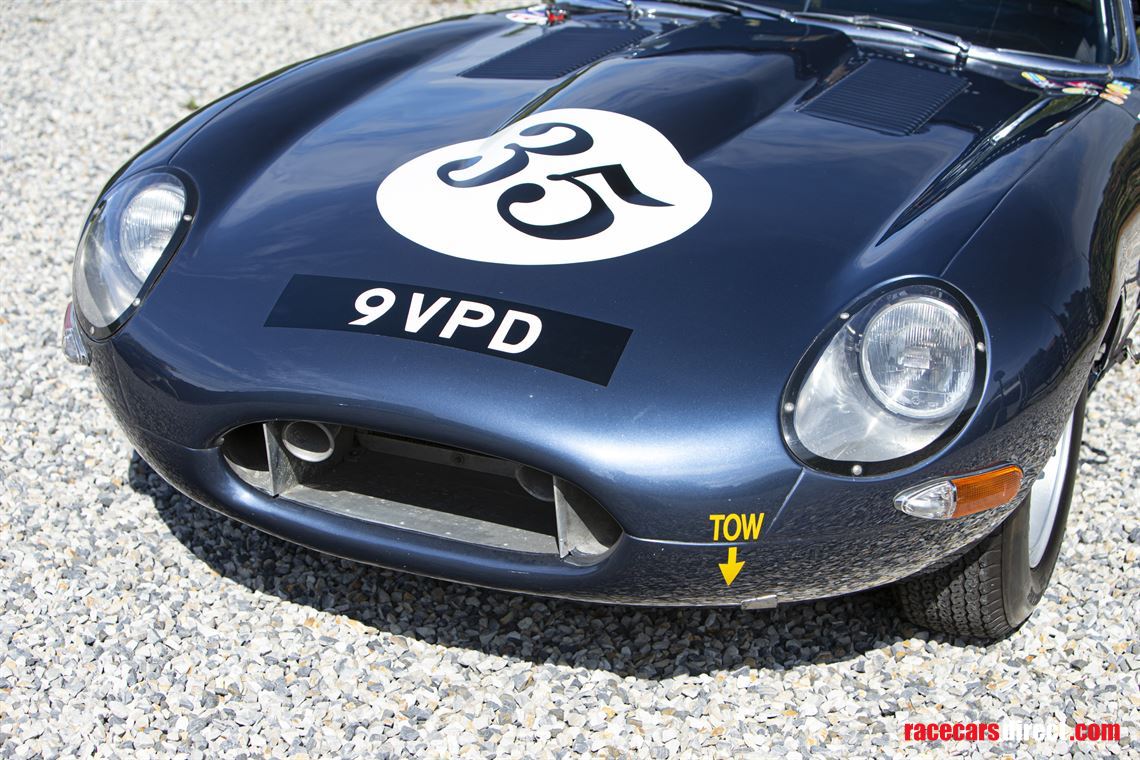 To be offered at Bonhams 14th September Goodwood Revival Sale.

'The career of the E-Type Jaguar in competition was an honourable one – although designed purely for road use, it proved to be one of the few cars able to offer a credible challenge to the mighty GTO Ferrari.' – Paul Skilleter, Jaguar The Sporting Heritage.

Right from the moment deliveries commenced in 1961, the E-Type began to find its way on to the world's racetracks. In the Grand Touring class for production sports cars the E-Type proved competitive right from the start, Graham Hill celebrating the model's racing debut by winning at Oulton Park on 3rd April 1961.

Entered by Jaguar dealer John Coombs, Hill's car was one of seven special competition E-Types, the very first of their kind built by the factory. Jaguar's designer, Claude Bailey, had initiated 'Project Specification ZP 537/24', the title of which was 'Variations Required To Build 7 Competition E-Type Cars'. The suggested modifications were in fact relatively mild, including an increased compression ratio; polished con-rods; gas-flowed cylinder head and inlet manifold; lightened flywheel; and the provision of a close-ratio gearbox. The fortunate few earmarked for this inaugural septet of racing E-Types were those who had already successfully waved the Jaguar flag on track: John Coombs, Tommy Sopwith, Écurie Écosse, Peter Berry, and Sir Gawaine Baillie. Ultimately, Coombs, Sopwith and Berry were granted two each and Baillie one.

Coombs' first competition E-Type, chassis '850006', carried the company's well known registration 'BUY 1' in its first year but by the following season its identity had been changed to '4 WPD'. It was this car that went on to become the prototype Lightweight E-Type and arguably the most important competition example of the model.

Coombs' second car - chassis '850007', the seventh right-hand drive roadster built - was completed on 29th March 1961 and despatched to Henlys of London on 20th July of that year. From there the E-Type was transferred four months later to Coombs of Guildford with the registration '9 VPD'. It effectively served as a spare for the team and, other than reputedly being entrusted to Graham Hill during testing at Goodwood, was not called into action until the Scott-Brown Memorial Trophy meeting at Snetterton on 23rd July 1961.

Albert Powell had been due to pilot one of Peter Berry's competition E-Types (chassis '850010', registration '3 BXV') before the car suffered a broken wishbone in practice, whereupon Coombs kindly loaned him '9 VPD'. According to Autosport, Powell ran as high as 4th before dropping back, eventually retiring when a broken fan belt led to overheating. No fewer than five of the seven 'ZP 537/24' cars were in action that day, including chassis '850005' ('ECD 400') and '850006' ('BUY 1') although that car did not carry registration plates at that meeting for some reason. The pair finished in 1st and 2nd places respectively. As far as its in-period competition history is concerned, little more is known of '850007' other than it definitely led a much quieter life than '4 WPD'.

Sold off into private hands, '9 VPD' was purchased by the preceding owner in July 2002 in an extremely dilapidated but original state, having been left in the open in Scotland for some 15 years. Jaguar Driver magazine reported that the E-Type had been off the road since 1973. Apparently, it was while north of the border that the E-Type was repainted red and acquired the Scottish registration '532 FS'. Acutely conscious of the Jaguar's historical significance, the owner entrusted it to marque specialists Beacon Hill Garage of Hindhead, Surrey with instructions to restore it as an FIA-compliant racer while preserving as many of the original components as possible. Major parts of the original tub (body number 'R1017'), including the front and rear bulkheads and spine, were employed in its reconstruction in steel, while the outer body panels were replaced with 'Lightweight' specification aluminium equivalents. All parts deemed surplus to the restoration have been preserved for posterity, including the original cylinder head, crankshaft, con rods, close-ratio gearbox, 'outside lock' bonnet, boot lid, doors, seats, hardtop, and hood frame. The vendor even managed to recover the original registration, which had found its way onto a Range Rover in Scotland.

Repainted in its original livery of Opalescent Dark Blue, the reborn '9 VPD' returned to the track in time for the July 2005 Silverstone Classic Festival, and later that year finished 4th overall in the Gentleman Drivers' two-hour race at Spa in the hands of Steve Markey and Austin Kinsella. It was 4th in the 2006 Le Mans Classic (behind two Ford GT40s and an AC Cobra) and 3rd overall and 1st-in¬-class in the Spa 6 Hours that same year, with former Le Mans winner Richard Attwood joining Steve Markey and Radical ace Austin Kinsella behind the wheel. It was the first Jaguar home and 3rd-in-class in the 2007 Le Mans Legends race, the year in which '9 VPD' also made its Goodwood Revival debut, with rally legend Rauno Aaltonen co-driving alongside Steve Markey. Now a regular contender in the Goodwood Revival, Le Mans Classic, and Spa meetings, '850007' boasts a list of helmsmen that also includes Emanuele Pirro, Marc Gené, and Tony Jardine.

In 2011 renowned marque specialists Rob Beere Racing supplied a new 3.8-litre engine and carried out further works on the cylinder block and heads in 2015.
This car's fascinating history is outlined in a detailed illustrated report, compiled by Gaëtan Van der Kindere and Stéphane Meeremans of British & Sportscars, which prospective purchasers are urged to read. This report illustrates the car's BMIHT Certificate; an old-style continuation logbook (issued 1969); in-period press cuttings; MSA Historic Technical Passport; old/current V5C Registration Certificates; and numerous photographs of the E-Type 'as found' and undergoing restoration. It also contains photographs and a detailed list of the vast quantity of original parts included in the sale, while the original documentation is contained within various box files and folders.
Beautifully presented and 'on the button', this highly significant and beautifully restored racing E-Type is ready for the fortunate next owner to enjoy.

ONLY ONE CAR LEFT !!