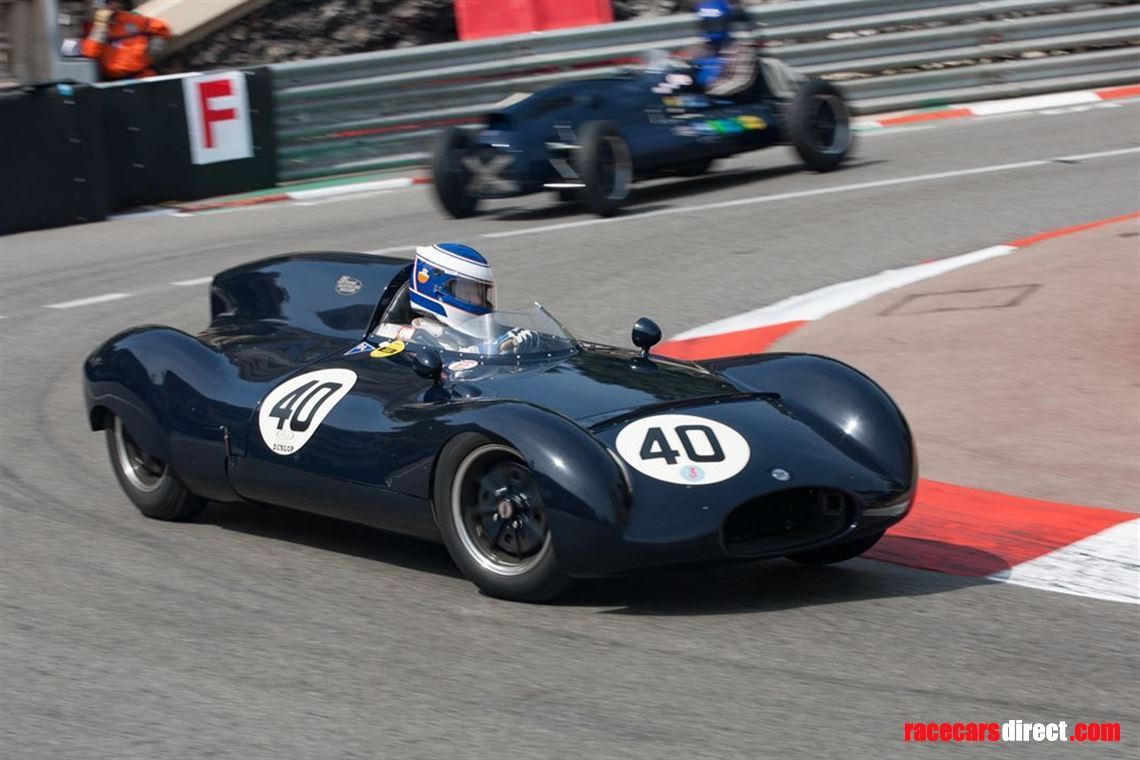 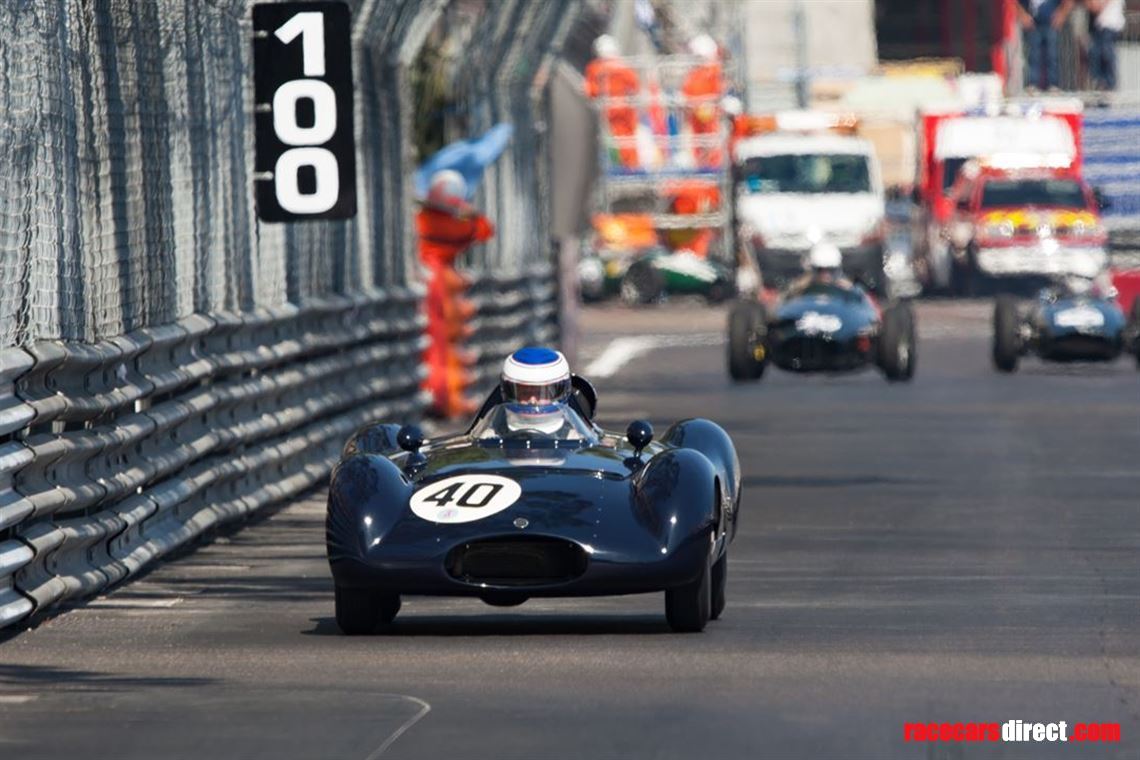 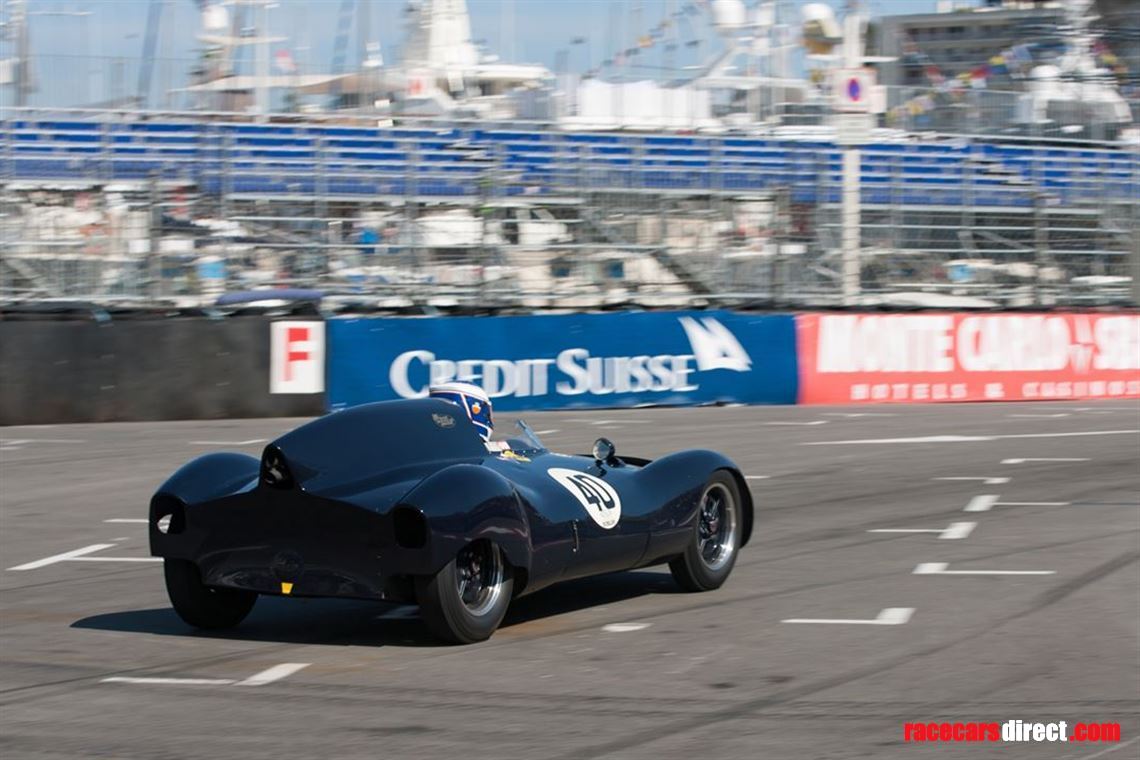 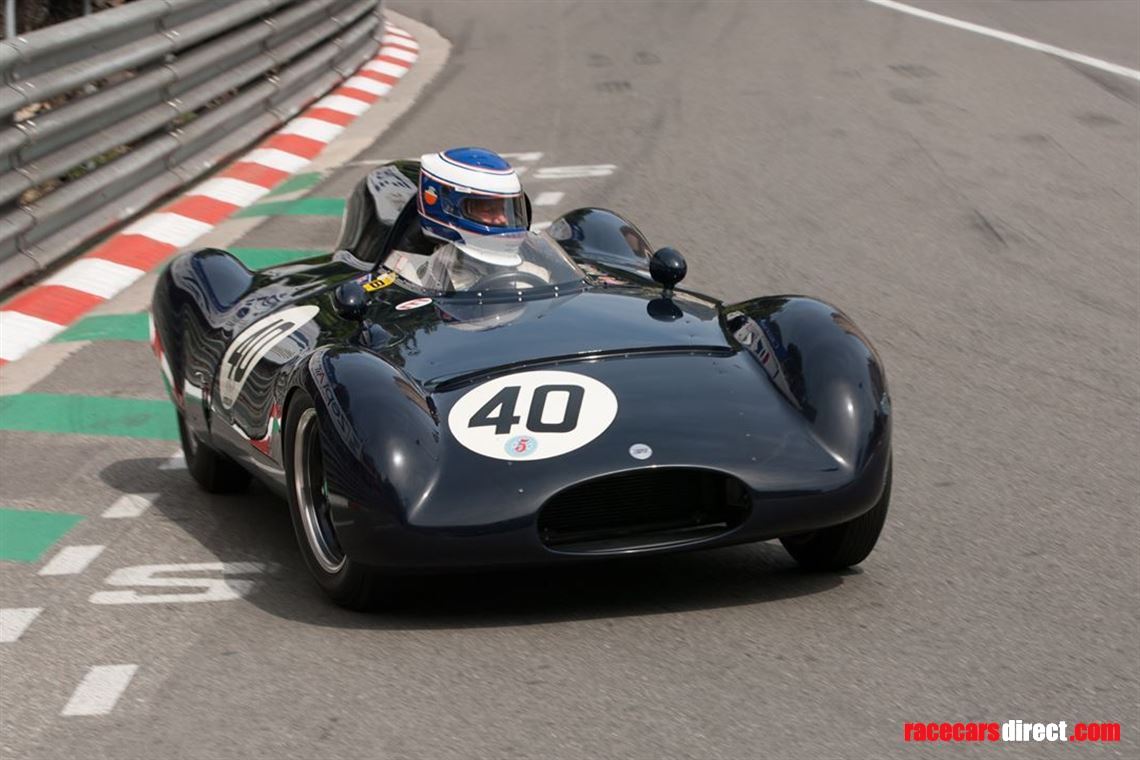 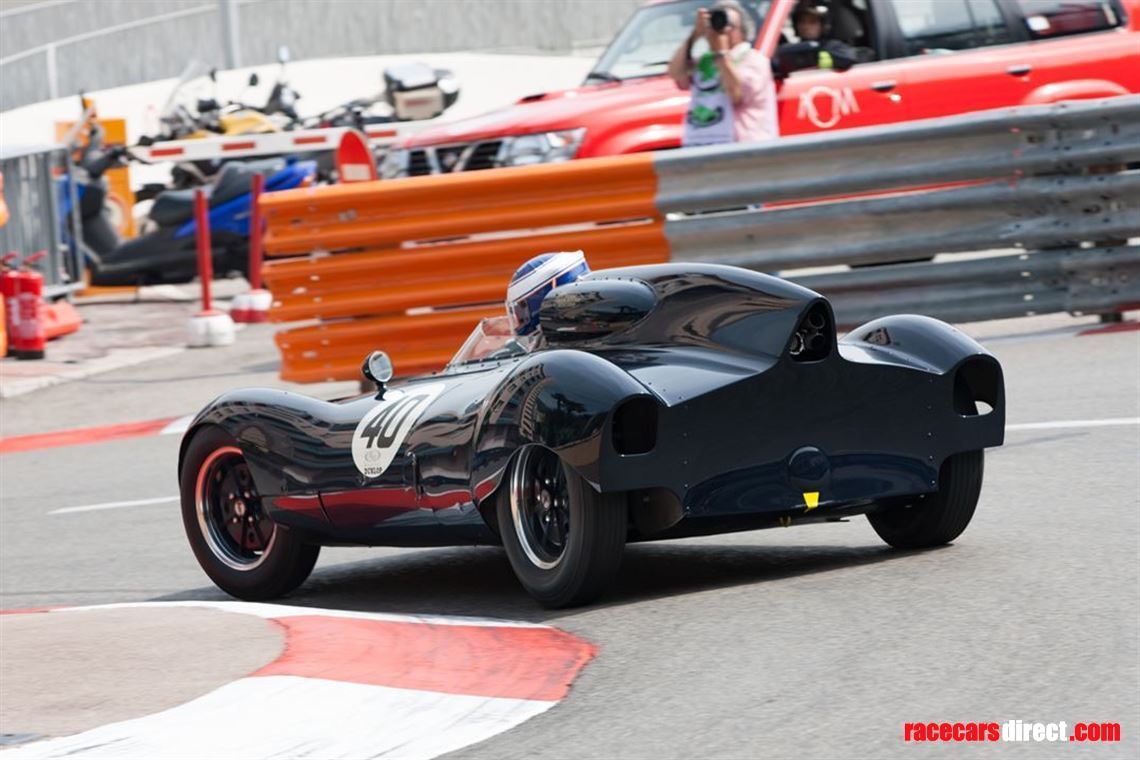 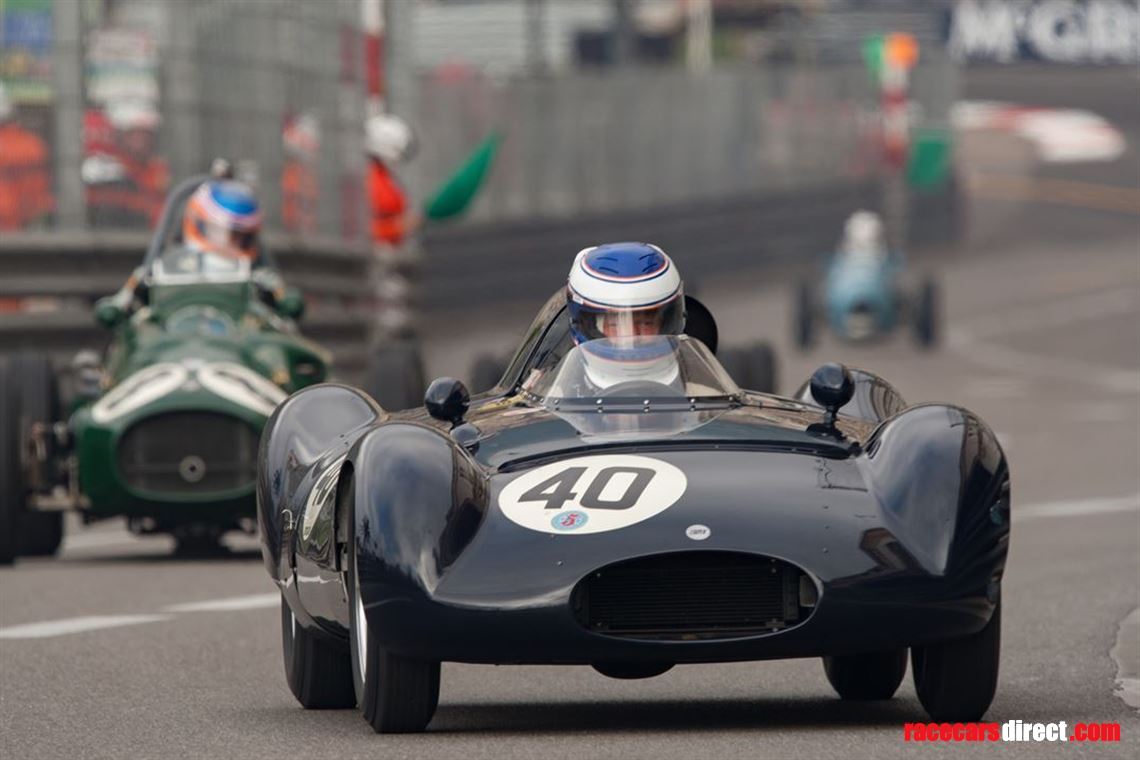 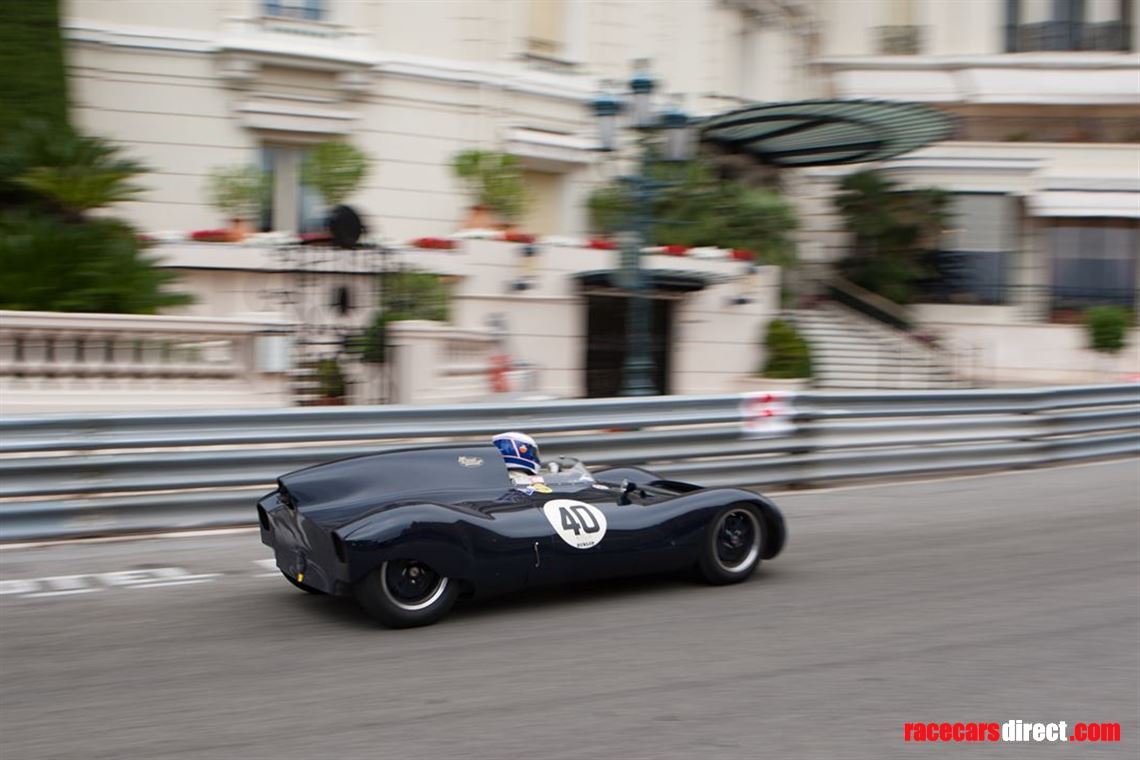 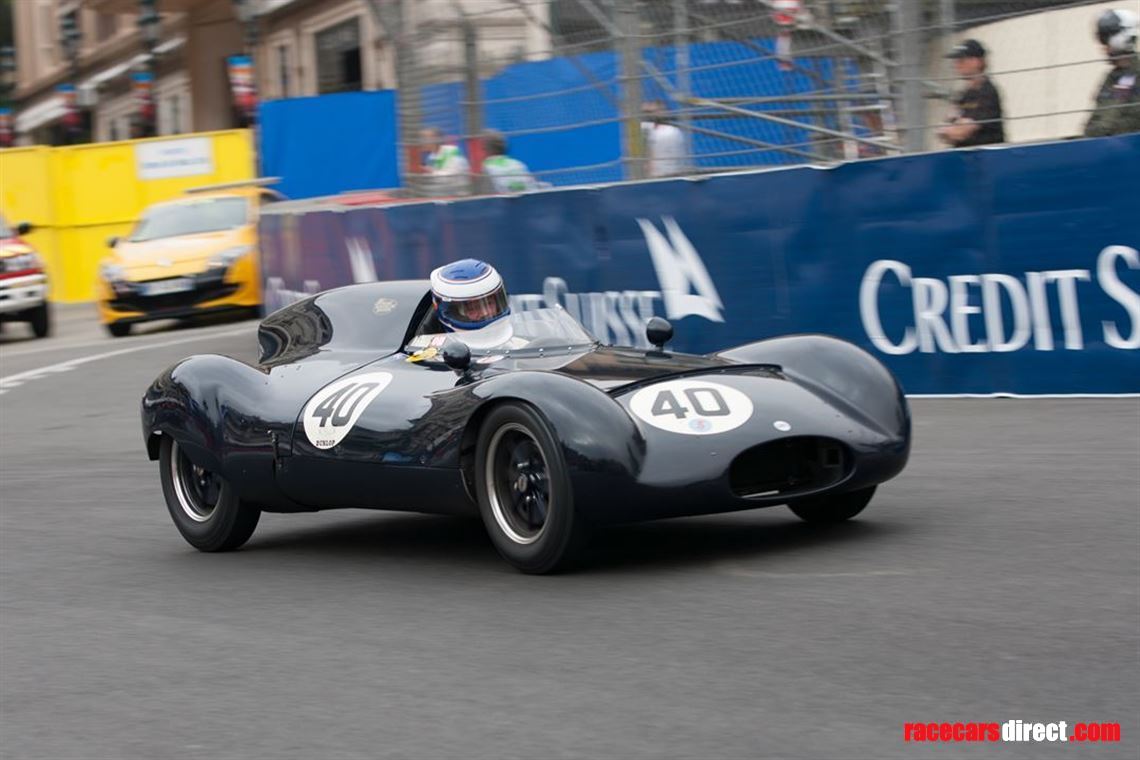 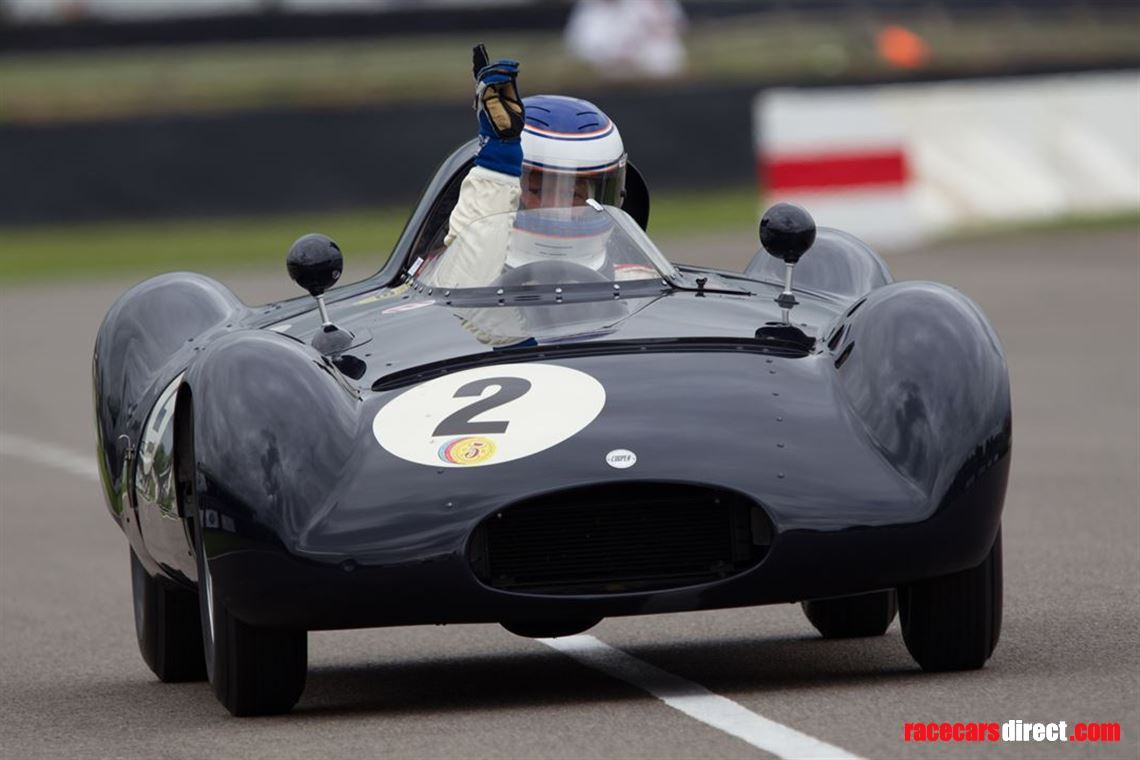 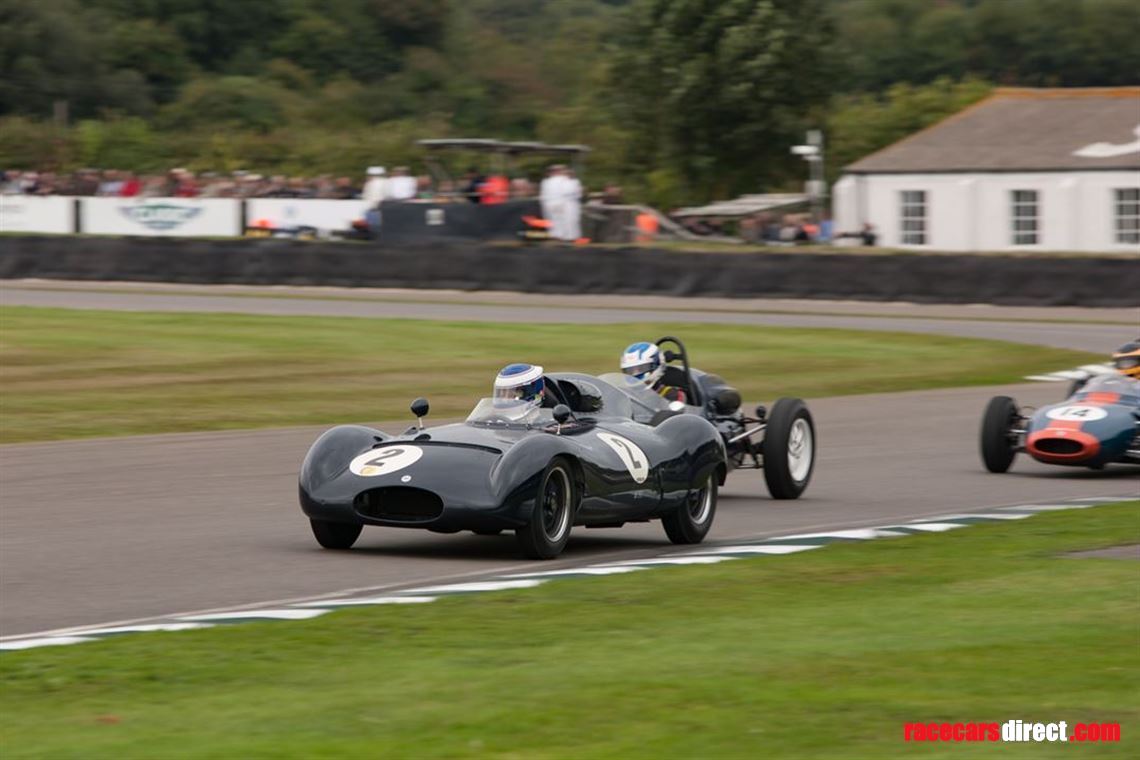 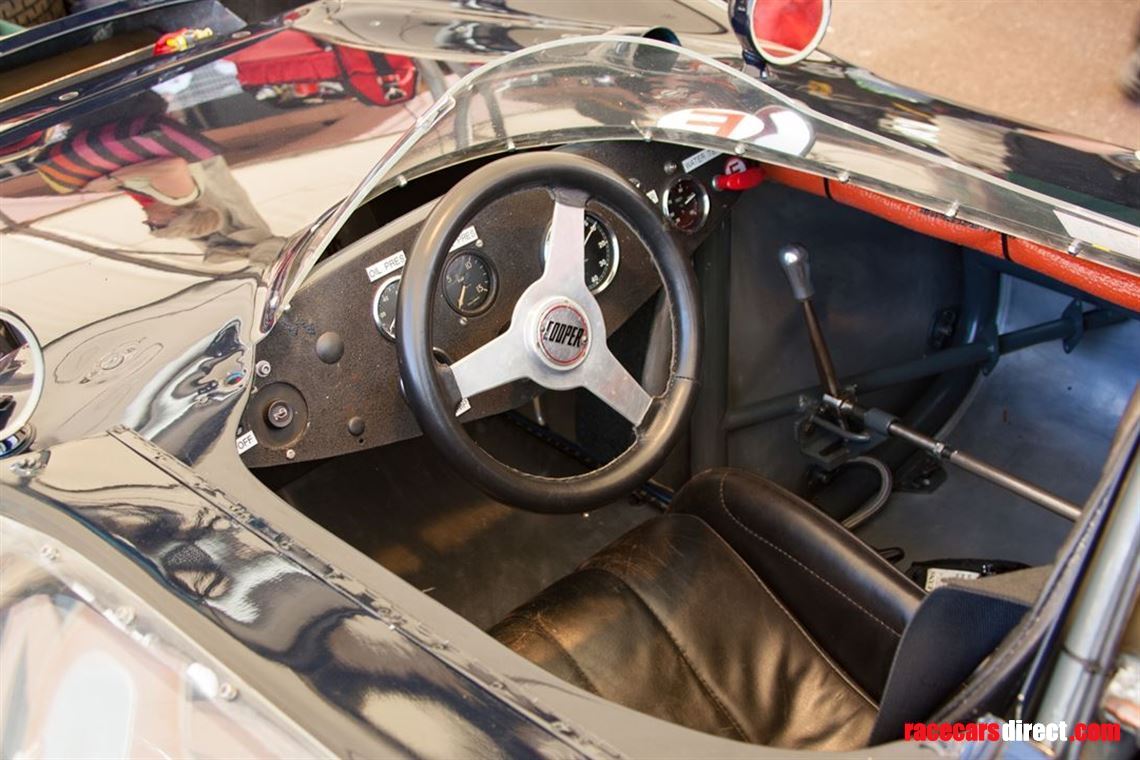 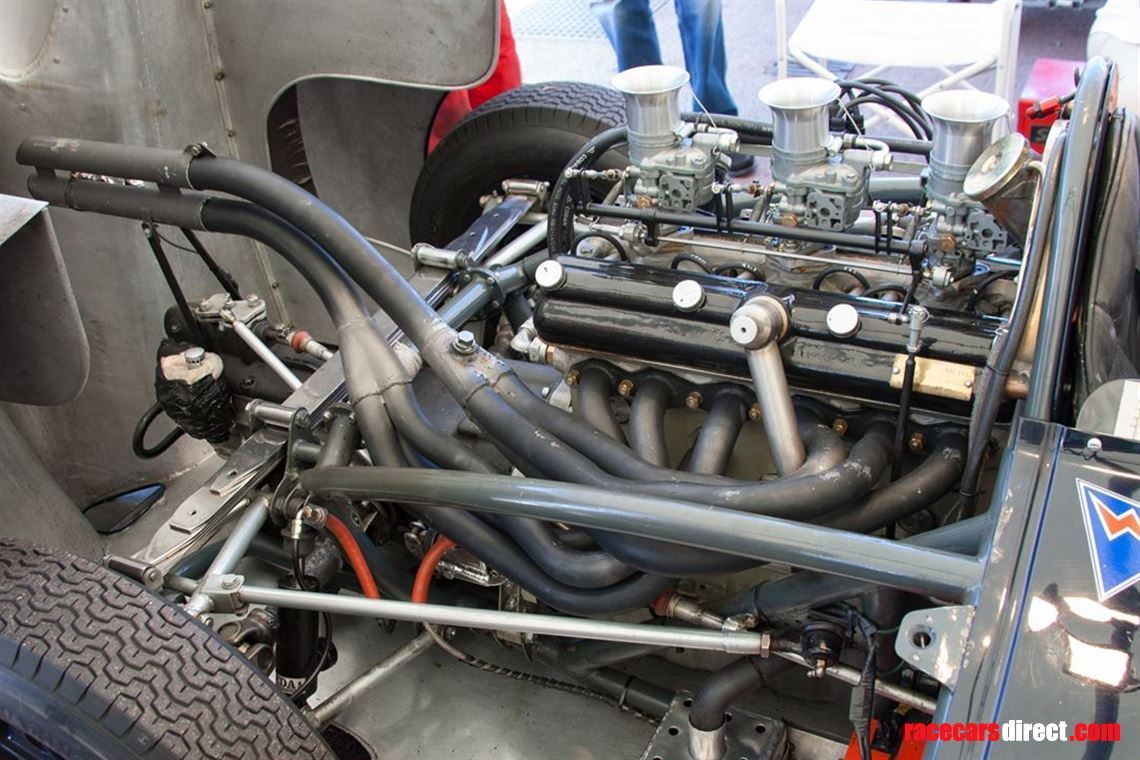 Powered by a Bristol 2-litre engine

The only driver to have won the Formula 1 World Championship at the wheel of one of his own cars, Jack Brabham started racing in the most prestigious of all categories in 1955. That year, he entered the British Grand Prix with a Cooper Bristol T40, which he had himself helped to develop. It was an essential car in Brabham’s life, which allowed him to take his first steps in the top single-seater racing category, but also to consider making a career for himself as a professional racing driver. This is the car that Ascott Collection is now offering for sale.

At the beginning of 1955, Jack Brabham arrived in England. He who was already known as "Black Jack" – because of his black beard and hair – wanted to try his luck in Europe for a year, and test himself against the best drivers. With a strong track record acquired in Australia and New Zealand, he began by driving a Cooper Alta, with no success. He went to see John Cooper and managed to convince him to let him work on his cars to improve them. After much persuasion, Jack Brabham earned the right to "prepare" the cars in the Cooper workshop, and to develop a car with a Bristol engine. He was not officially employed and worked without a salary, but he put all his talent at Cooper's service. The priority of John Cooper's workshop was to develop a car powered by the Coventry Climax FWA engine, which had been launched in 1954 and was then unbeatable. The decision was made to build a sports-car prototype, to be known as the T39. The body shape was inspired by the Lotus MK8 built by Colin Chapman and Frank Costin, but with a substantially modified rear section to improve the car’s overall aerodynamics. This modification was suggested by Sydney Camm, the Hawker Aircraft designer. With Owen Maddock, John Cooper decided to relocate the engine at the rear – using the newly available space - and kept the driver’s cockpit in the middle, as in the Lotus MK8. Nicknamed "Camm Tail" in reference to the designer who suggested its shape, the car was also called "Kamm Tail" because, with its truncated rear section, it applied the aerodynamic theories of the German scientist Wunibald Kamm[i]. Its most common nickname however was "Bobtail", again referring to its short rear section.

The Cooper T39 was rapidly successful, first in England and then all over the world. Models of the car were entered for the Sebring 12 Hours, the 12 Hours of Reims, and the Le Mans 24 Hours. Over the years, other engines than the 1100cc 4-cylinder Climax were fitted in various chassis. A Volvo engine, Porsche Boxer engines, the 1.5-litre Coventry-Climax FWB and finally a 2 litre-Bristol engine. It’s to Jack Brabham that we owe this combination of a Cooper T39 chassis and a Bristol 2-litre engine, producing the T40. Brabham dreamed of using a 2.2-litre engine (with the regulations allowing up to 2.5 litres) but a 2-litre engine was finally chosen. While John Cooper - with good reason - saw the sports-car category as an opportunity to excel, Jack Brabham developed "his car" in the workshop with his sole objective being Formula 1. That was why he quickly asked Owen Maddock to develop a T39 Bobtail for the car. It combined a "big" 6-cylinder engine with the small T39 chassis. Some people see in this the origins of what was to be the Can-Am philosophy of the 1960s.

Jack Brabham made his debut in F1 with the T40

With its tubular structure and integral fairing that enveloped the front and rear wheels, the T40 was prepared right up until the eve of the British Grand Prix, which at that time was held at Aintree, on July 16, 1955. The T39 chassis which was used as a base had its wheelbase lengthened by 50 mm, and many features were removed, such as the headlights which were not needed. On the morning of the race, the clutch broke. After a makeshift repair, Jack Brabham started the race. After qualifying in 25th position, more than 14 seconds behind the leading cars and 27 seconds from Stirling Moss in pole position, Jack Brabham spent most of the race in last position before dropping out on lap 30 (out of 90) with an overheating engine.[ii] His mechanics had to push him at the start of the race, as the car had difficulties getting going because of the clutch that had been damaged that morning and the first gear that had been removed from the gearbox so as to be able to fit the gearbox and engine into the chassis.

The programme of the event spoke of a test car which foreshadowed the future Cooper Bristol that was to be entered in 1956. This was not to be though, since the 1955 British Grand Prix was to be the only Formula 1 World Championship race that the T40 took part in. While on paper the T40 seemed to have failed in its first race, it was actually a revolution that Jack Brabham had just launched, with the rear-engine T40 clearly announcing the future of Formula 1 cars. The 1959 T51 was to be the direct descendant of this truly pioneering T40.

After this first Grand Prix, Jack Brabham raced in several events, including the Snetterton event (which was not part of the World Championship). He finished 4th and truly made his mark thanks to a duel with Stirling Moss. "The specialized press spoke of a battle of champions, and it was certainly an important step in my career. Without that race, I would definitely have gone back to Australia", wrote Jack Brabham in his autobiography "When the Flag Drops". "The car behaved wonderfully in that race", said the driver, who then decided to put her on a boat to offer her a career in Australia and New Zealand. The car was raced in particular at Orange, Ardmore and Port Wakefield, with Jack Brabham at the wheel up until March 1956. He won the Australian Grand Prix (which, however, did not count for the World Championship), thereby giving the T40 its first victory. Then he decided to sell it to pay for his and his family’s removal to Europe. It was to be the start of his dazzling rise to fame, with 3 World Championship titles, 123 Grand Prix races and a total of 14 victories.

The Bristol T40 stayed in Australia for many years, changing owners several times. Purchased from Jack Brabham by Reg Smith in 1956, it was later acquired by Max Stephens (1959) and then by Alan Roberston (1964), still in Australia. The latter decided to convert it into a car for sport-prototype racing, like the T39 seen at the Le Mans 24 Hours. This was only a short interlude however, because its next owner, Frank Cengia, who acquired it in October 1974, decided to restore it to its 1955 configuration – that it still sports today – before it became the property of Cary Manolas, still in Australia. In 1989, it was acquired by Peter Hannenen and imported to England. In 1992, it passed into the hands of the German driver Thomas Bscher. It was then acquired by Mr. Wulf Goetze, who entered it for several historic races including the Spa Summer Classic in 2009, the Grand Prix of Monaco Historique in 2012 and the Goodwood Revival in 2013.

Its has been entered in the Grand Prix of Monaco Historique in 2014 and in the Trofeo Nastro series organized by Peter Auto.

The car is being offered for sale with its HTP dating from June 2015 and valid up until June 2025, and has just been overhauled.

It has been selected to take part in the 12th Historic Monaco Grand Prix of 2020 - Race B.

The Ultimate Bugeye, 1 0f 400, only the best components, all modifications easily reversible