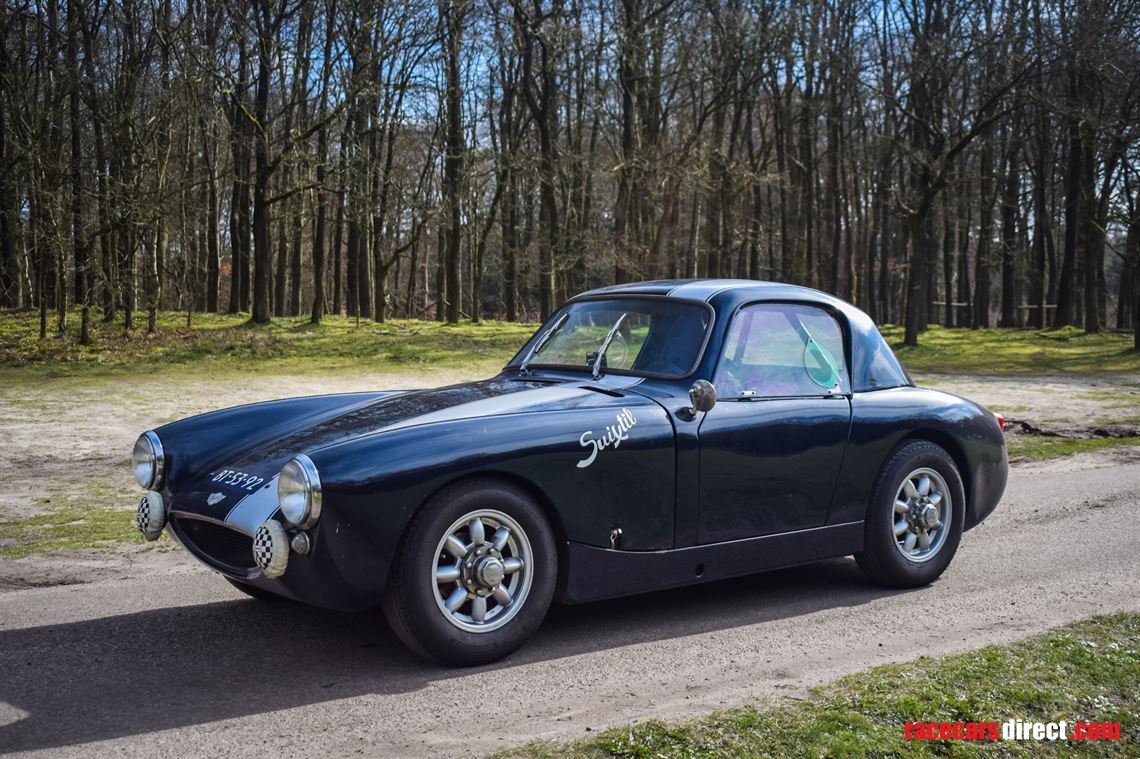 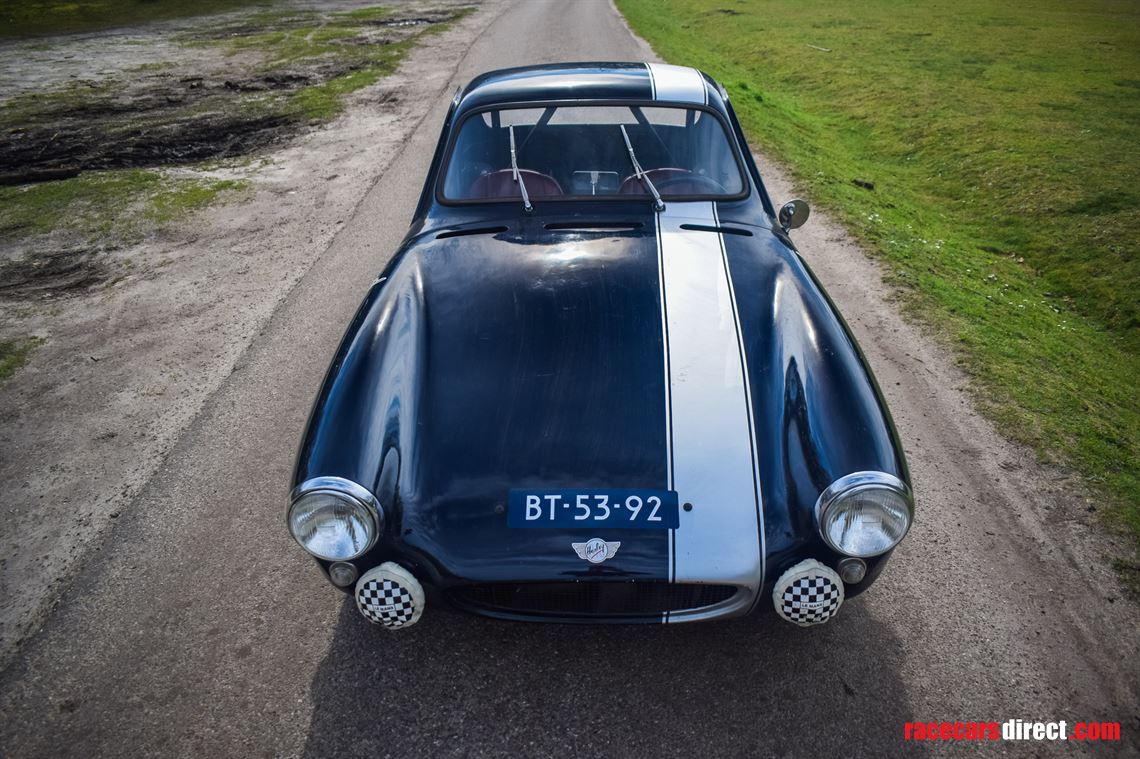 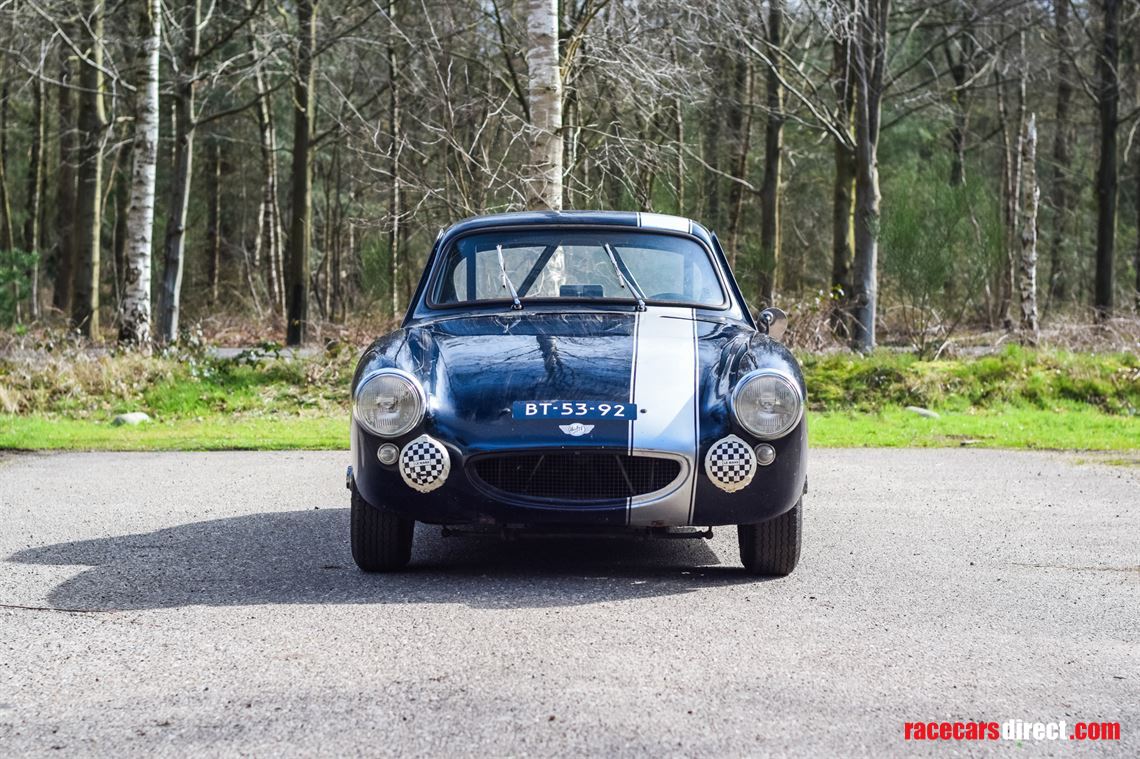 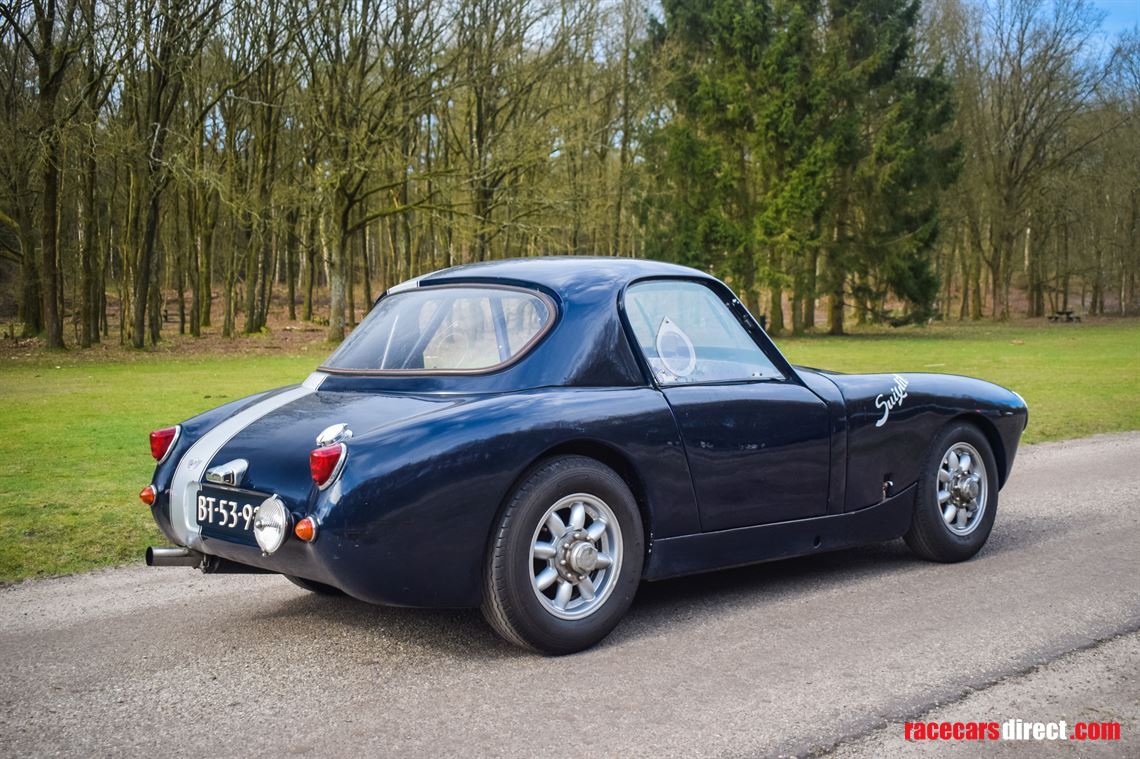 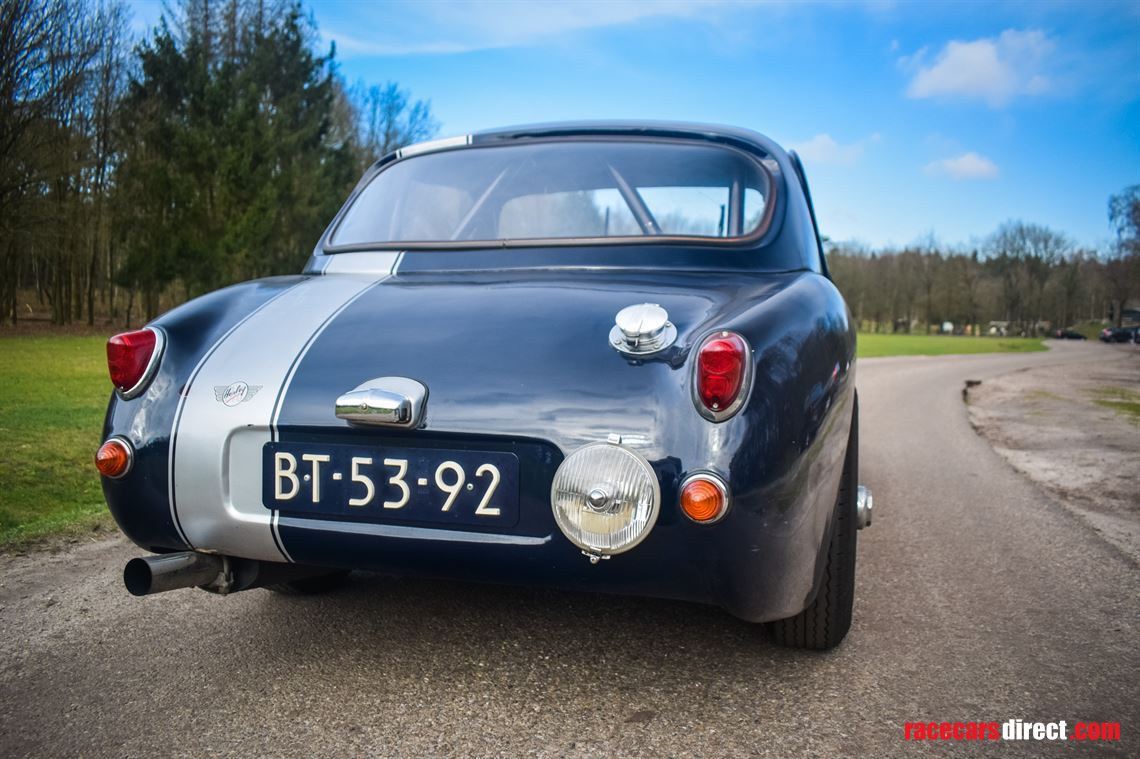 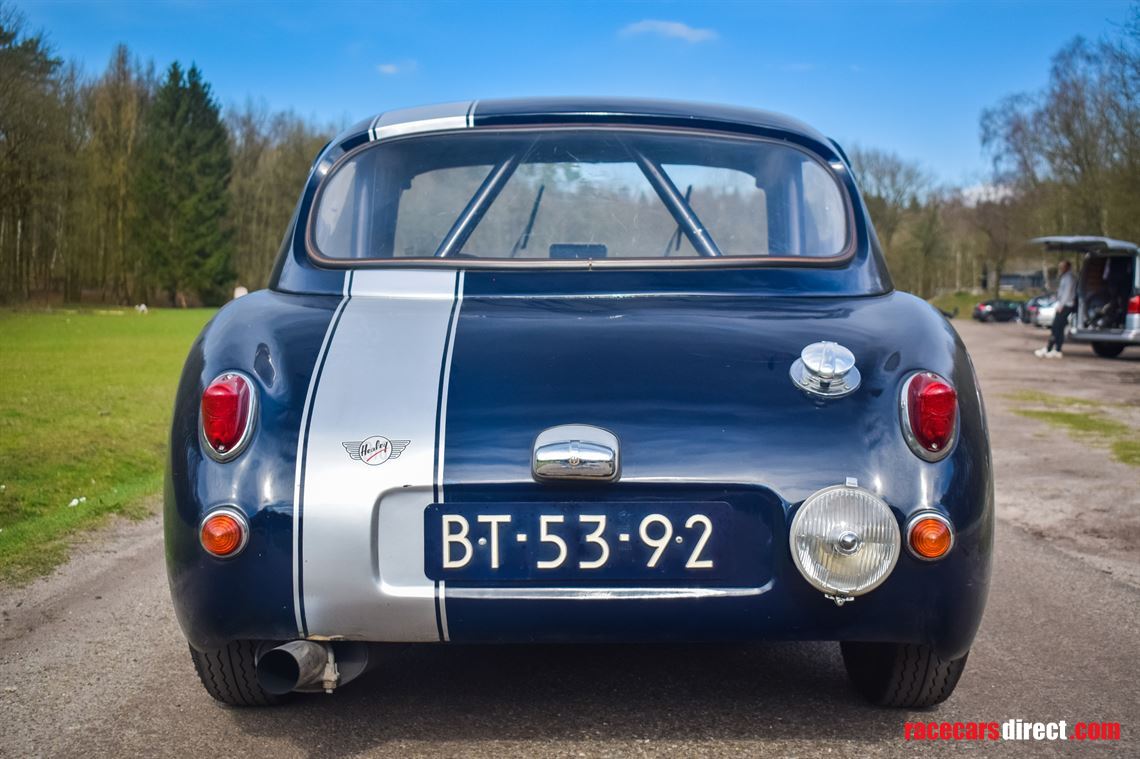 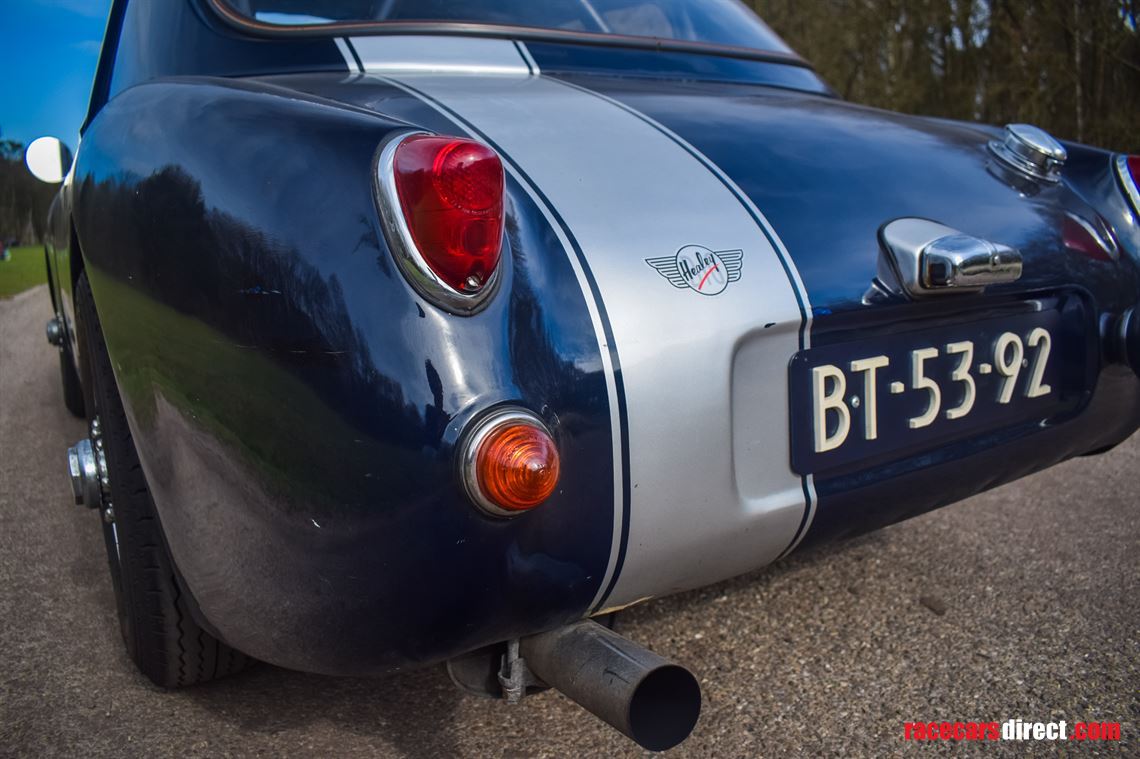 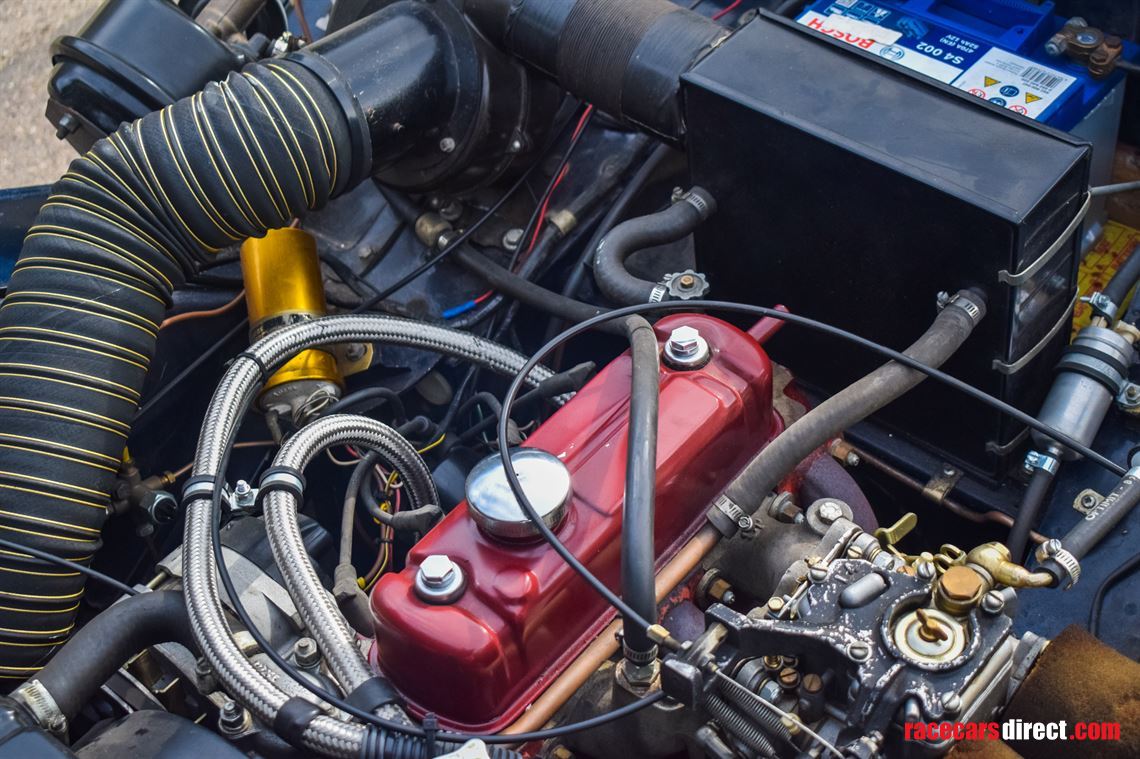 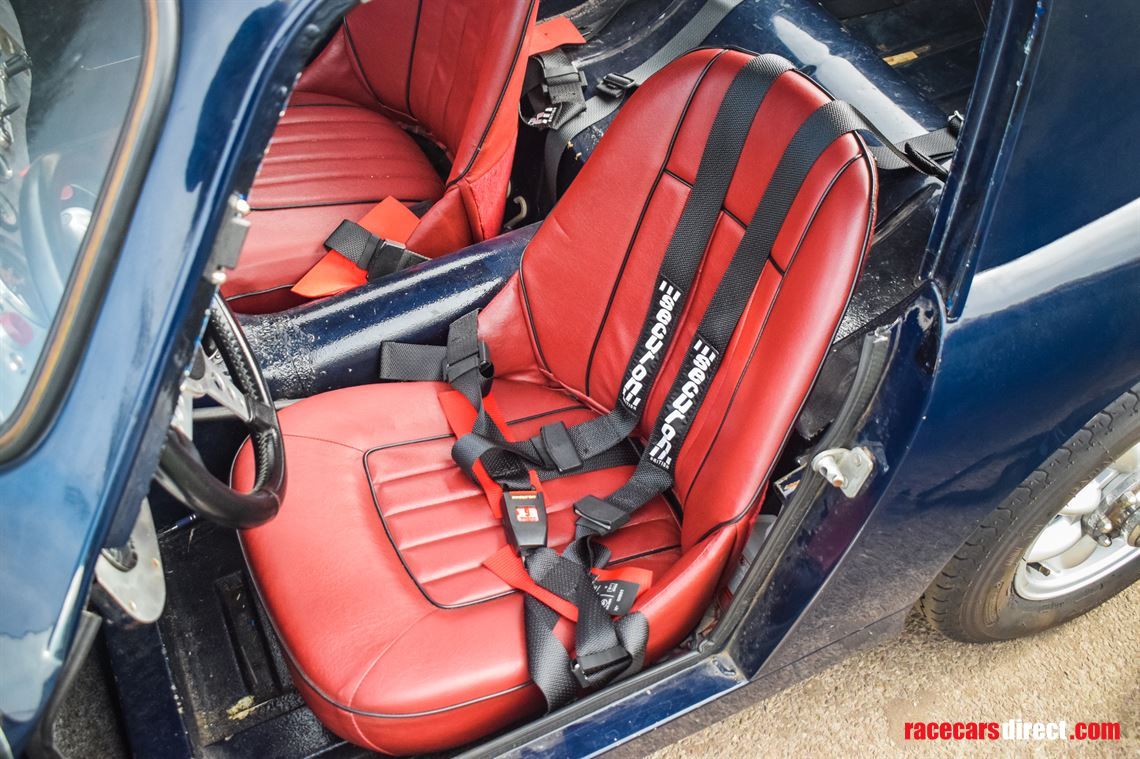 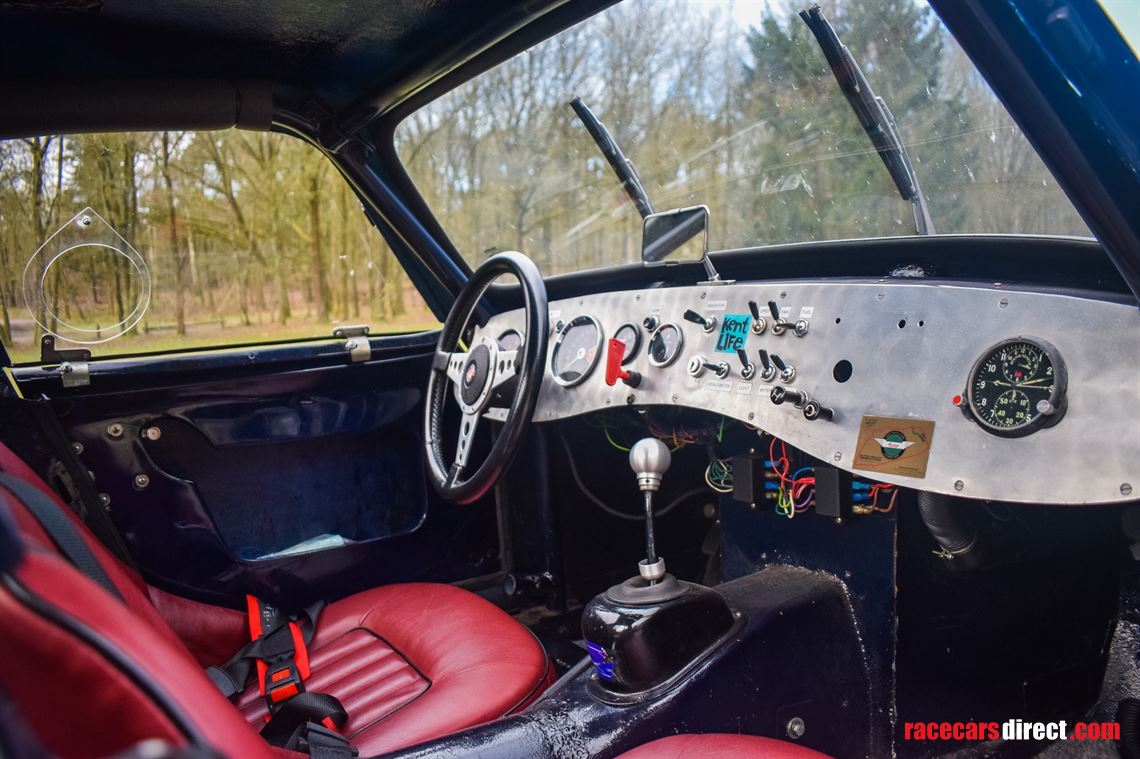 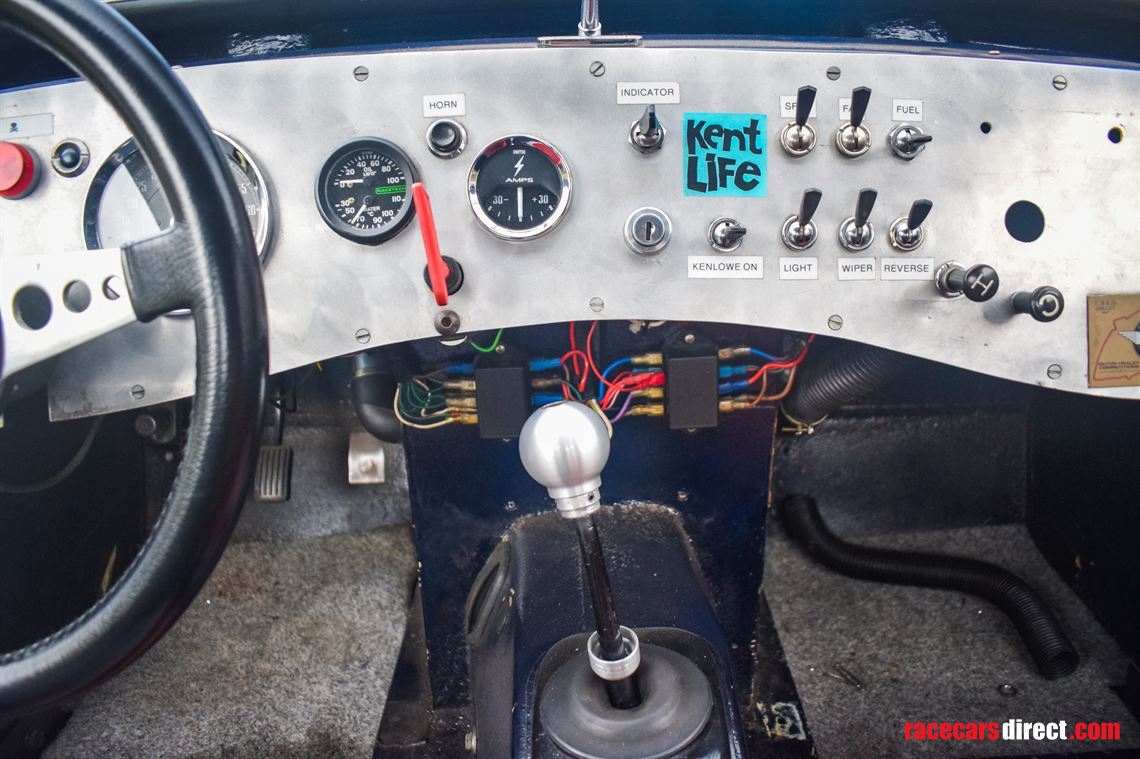 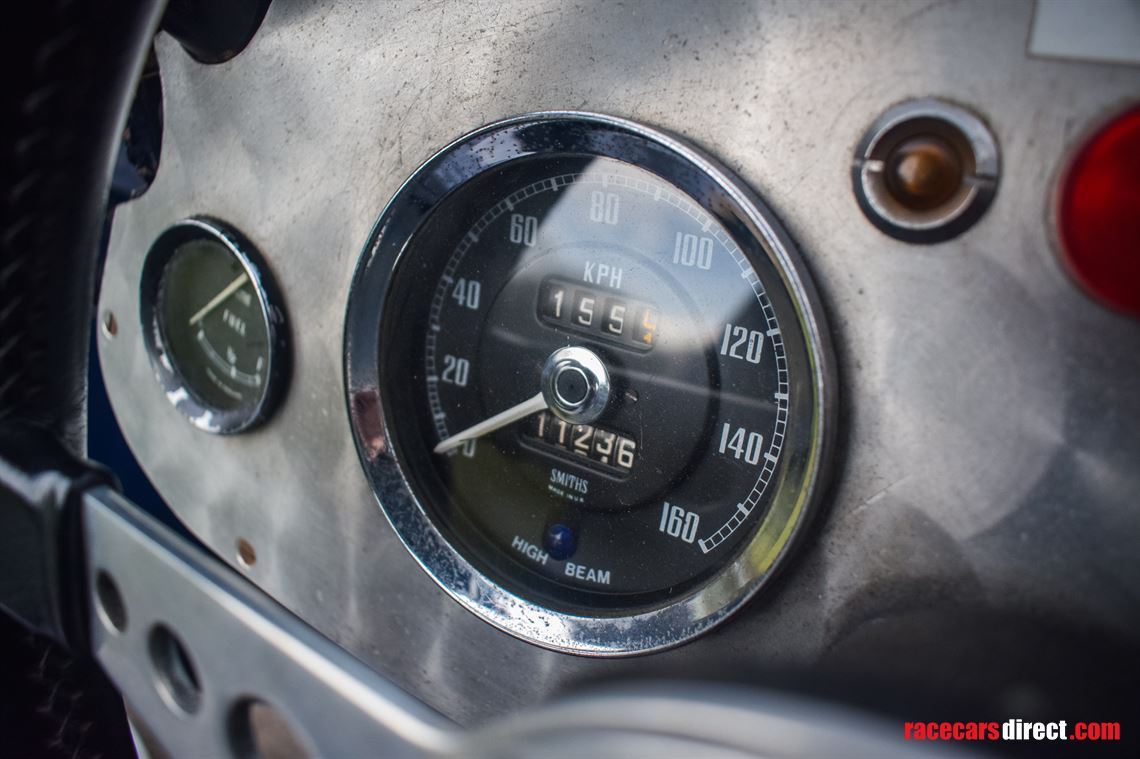 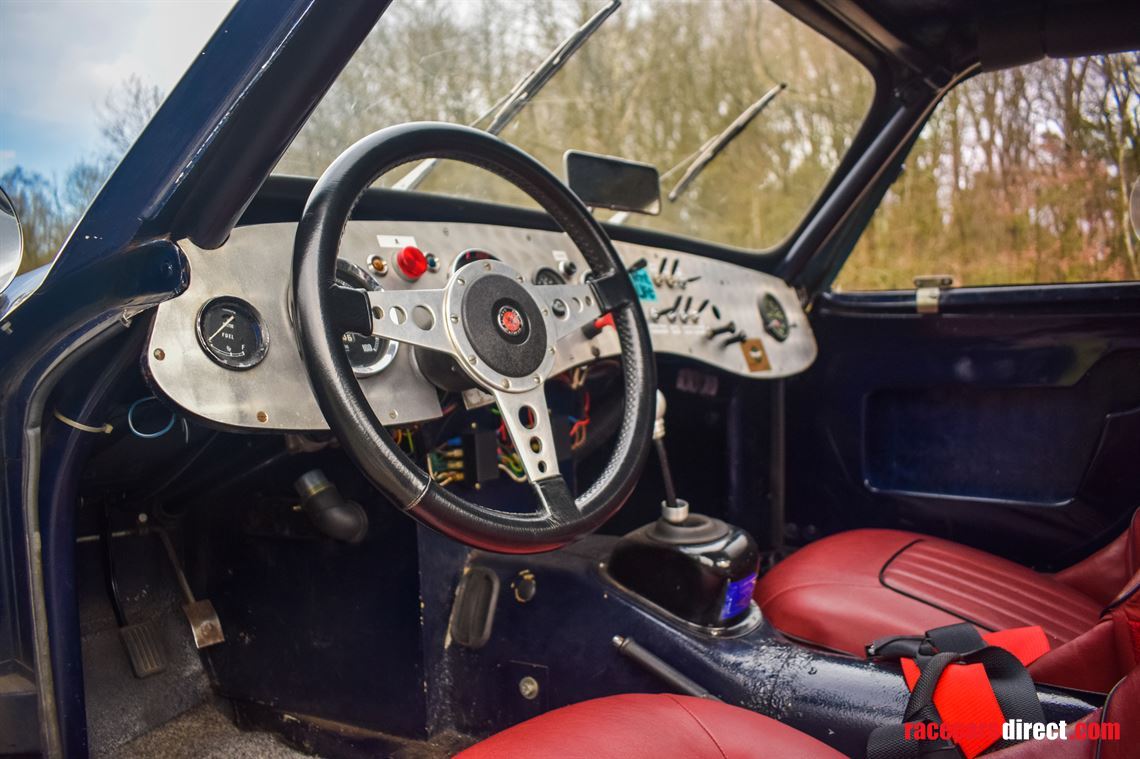 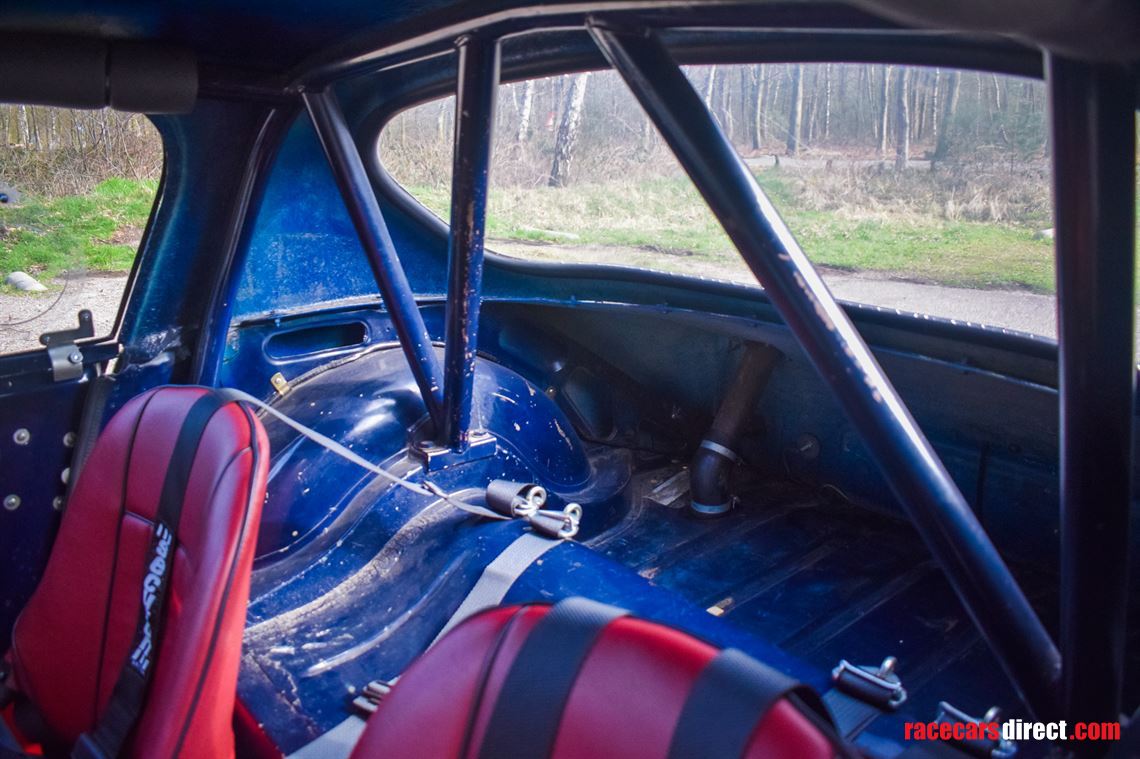 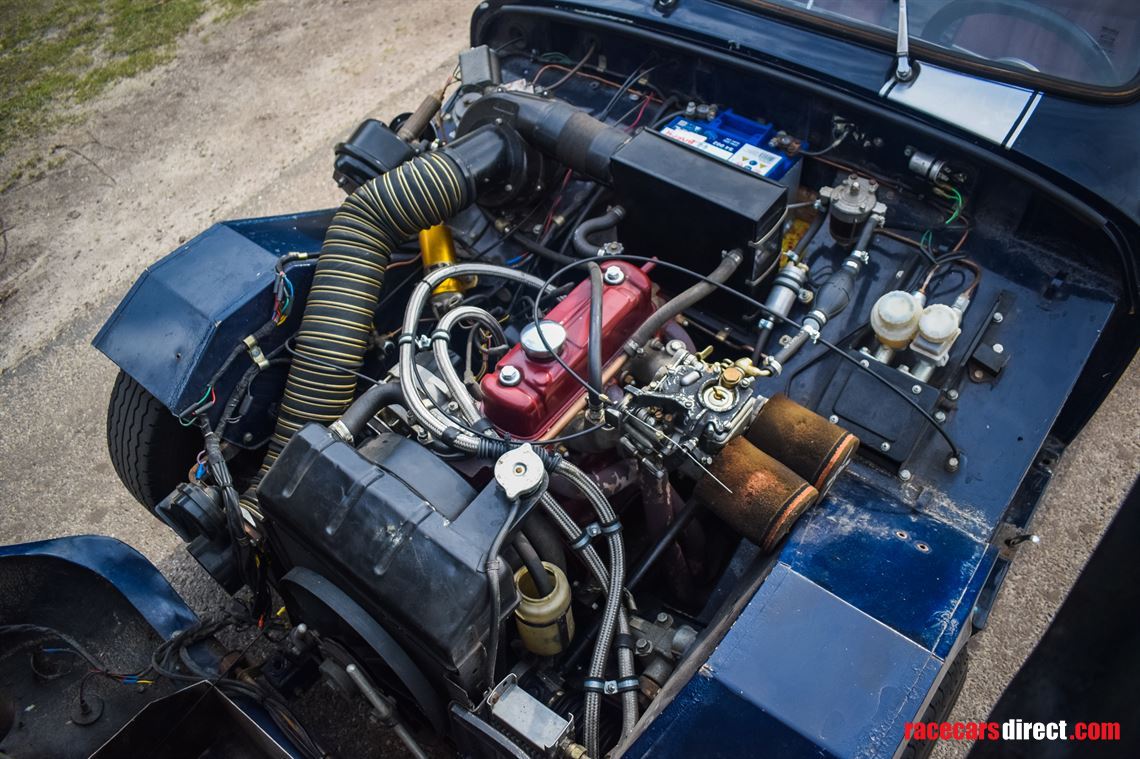 As many of you will know Brian Archer's replica of the Sprinzel Coupé was based on Stephen's original car WJB 707, raced in period by the late Ian Walker. While waiting for WJB to be restored Stephen built this replica in order to participate in a few classic rallies and other events. It was completed in 1995 just in time for the Tulip Rally of that year.

The car was built using a new monocoque built by Wheeler & Davies, fitted with a fibreglass Frogeye rear end, and a full roll cage with side bars which was made to measure so that it fits very tightly under the roof section. The hardtop was glued to the lower bodywork to give additional strength, especially to the rear end where part of the centre panel was cut out. The bonnet has been strengthened with Kevlar honeycomb and bonded to the standard unit to stop sagging of the middle section on to the rocker cover. The doors are a direct copy of the original Sebring's doors but made in Kevlar, and the body is painted in Royal Blue with silver stripe.

The front suspension uses all new parts including Heritage wishbones, low race front springs from Peter May and negative camber trunnions, competition Armstrong shock absorbers with HD valves and thicker Penrite oil. The top trunnion thrust washers have been replaced with needle rollers for lighter steering, the inner ends of the wishbones fitted with poly bushes, and a 5/8" anti-roll bar has poly mounts with standard links. The steering rack was new and there is a 14" leather Motolita steering wheel.

At the rear, the axle has Peter May competition half shafts with new wheel bearings, 3.9 diff with new crown wheel & pinion. The rear springs are full race Peter May items making the car low but comfortable. Rear radius arms were new with competition bushes, there are lowered bump stops and special double-acting rear lever arm shock absorbers.

The brake system has been modified in the last few weeks [Nov 2011]. A standard single line system is now used as in 1970 Sprite with new brake master cylinder, new discs, C&C recon callipers and AP brake servo. This is so that the standard wire wheels can be fitted. A later type of Spridget pedal box is used mounted on later type footwell top panel. Aeroquip hoses are fitted front and rear. Rear brakes are later type as fitted to disc brake cars. The wire wheel hubs on the rear are bolt-on type making the rear axle wider, and the spinners are octagon all round. Wheels fitted are knock-on Minilite copies of 5Jx13 ins.

The heater system is standard late Sprite with a standard radiator fitted with larger cooling block and with no fan fitted on the water pump pulley, but for extra cooling in traffic a Kenlow electric fan with hand switch rather than thermostat control. The temp is usually around 82 deg C.

The car has been very little used in the last 7 years. The body has never been damaged but has some external scratches, etc due to storage and transport but it seems silly to respray the car before sale. New sidescreens have just been made and a new front screen will be supplied with the car as the old one is cracked. I also have a Peter May 900 brake kit with 4 pot Millwood aluminium calipers or MGB calipers that can be fitted. The old dual line brake system is also available.

The car is left hand drive and Dutch registered.

In August 2012 Stephen sold the car John Beunk of Meppel in Holland. He brought it along to the 2014 Spridget Meet at the Healey Museum and sold it afterwards to a new Dutch owner. Currently this car is in order from the owner for sale at Kroymans Automotive.

MOT valid until: comes with new MOT. This car has a Dutch registration.

This good running Royal Blue "Lightweight Fiberglass Sebring Sprite" is prepared for rallies and racing. A full roll cage with side bars is perfectly fitting and tailor-made for this car. The doors are a direct copy of the original Sebring doors but made of Kevlar.

Please don't hesitate to contact us when you've got further questions!

Based on an original 1961 Austin Healey Frogeye Sprite steel body.

For the one that wants the best gearbox avaliable !

A beautifully executed homage to one of the titans of motorsport. Finished to exacting standards.