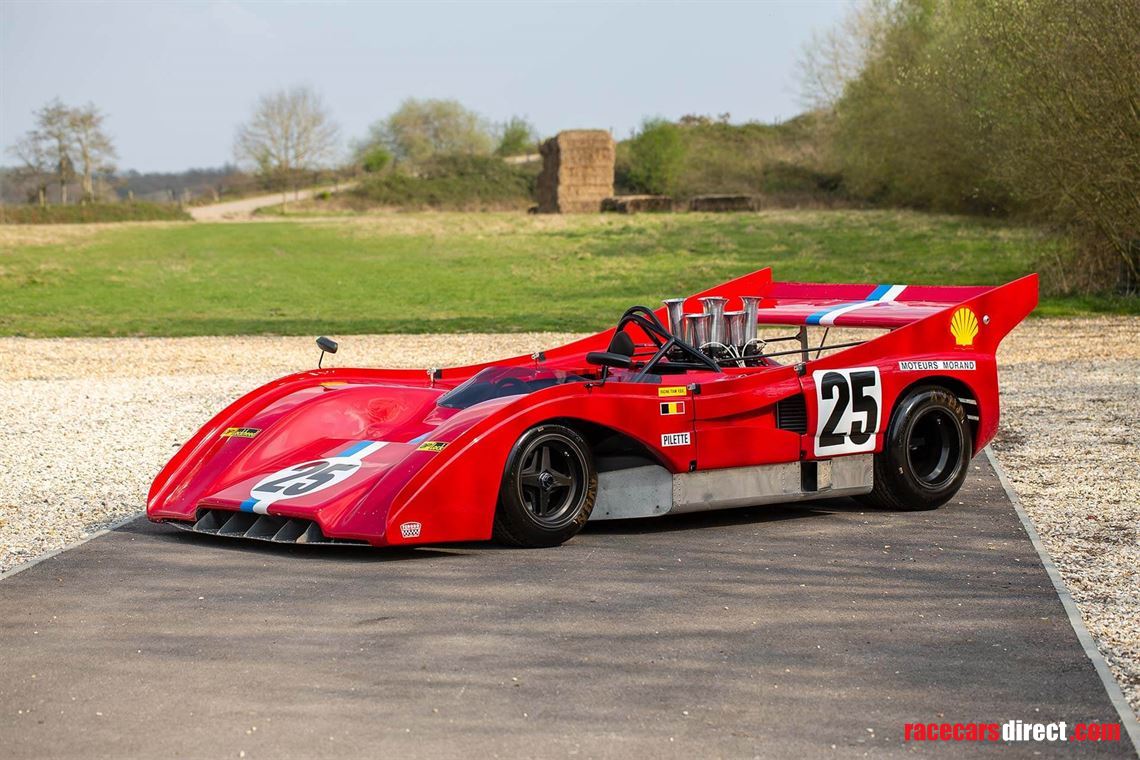 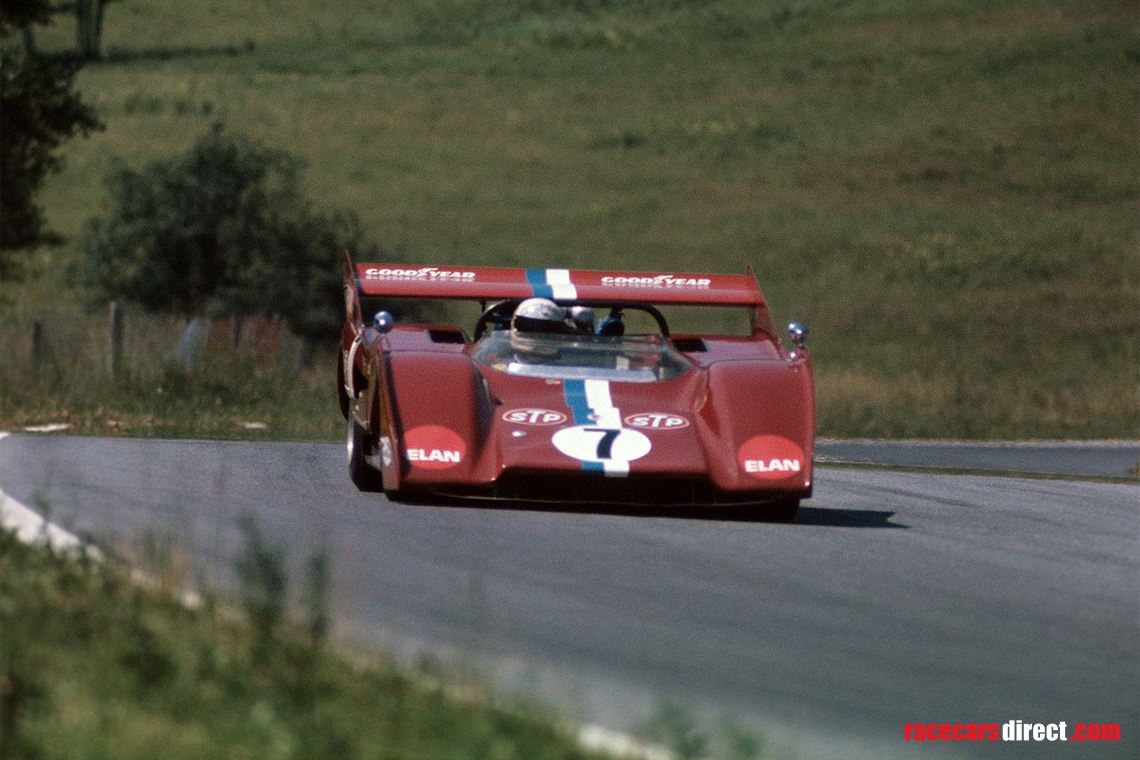 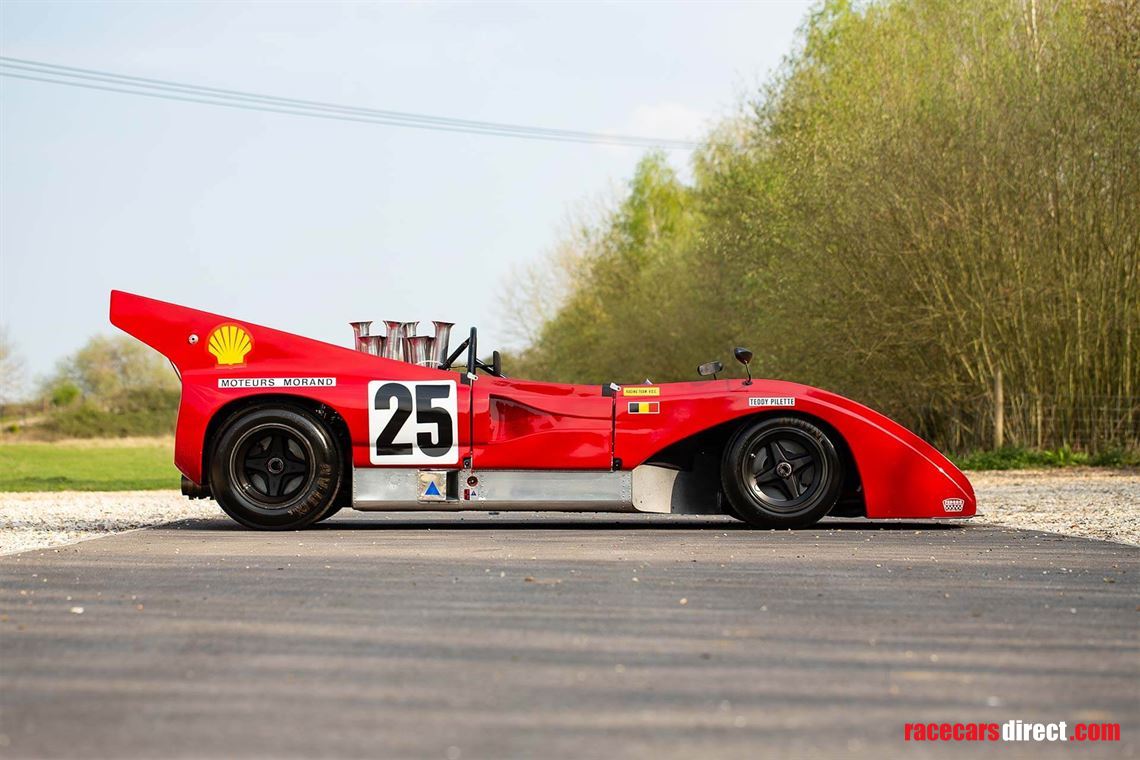 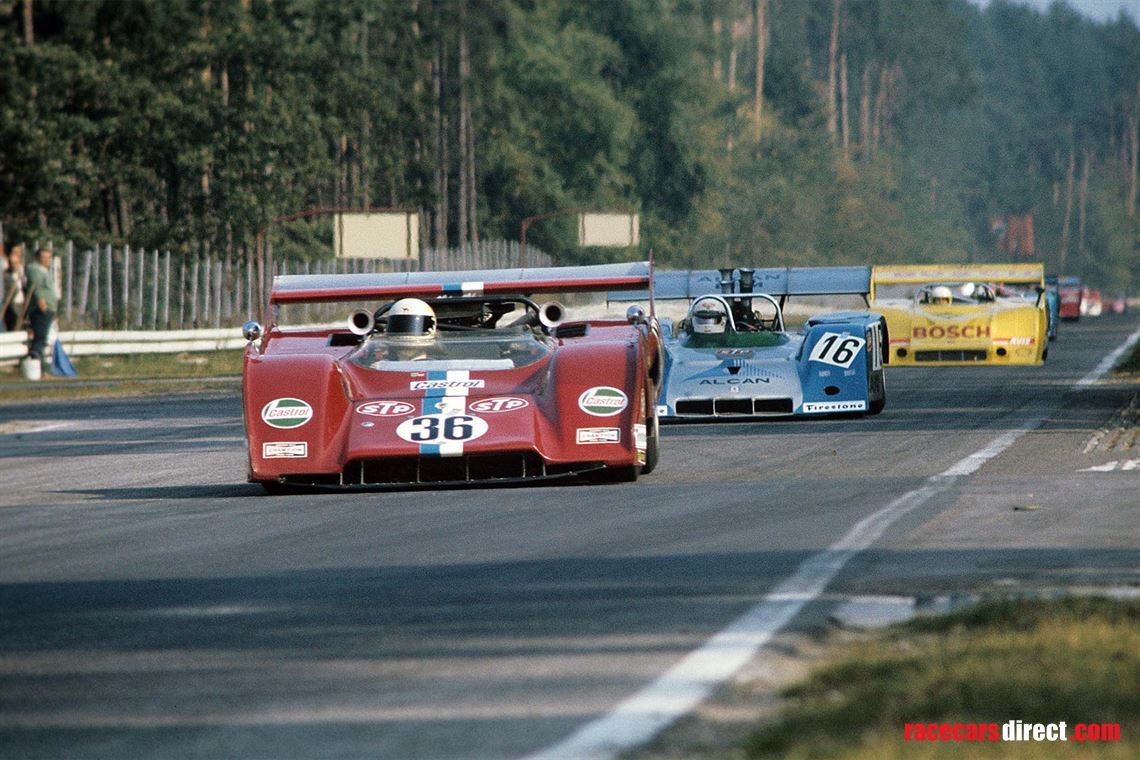 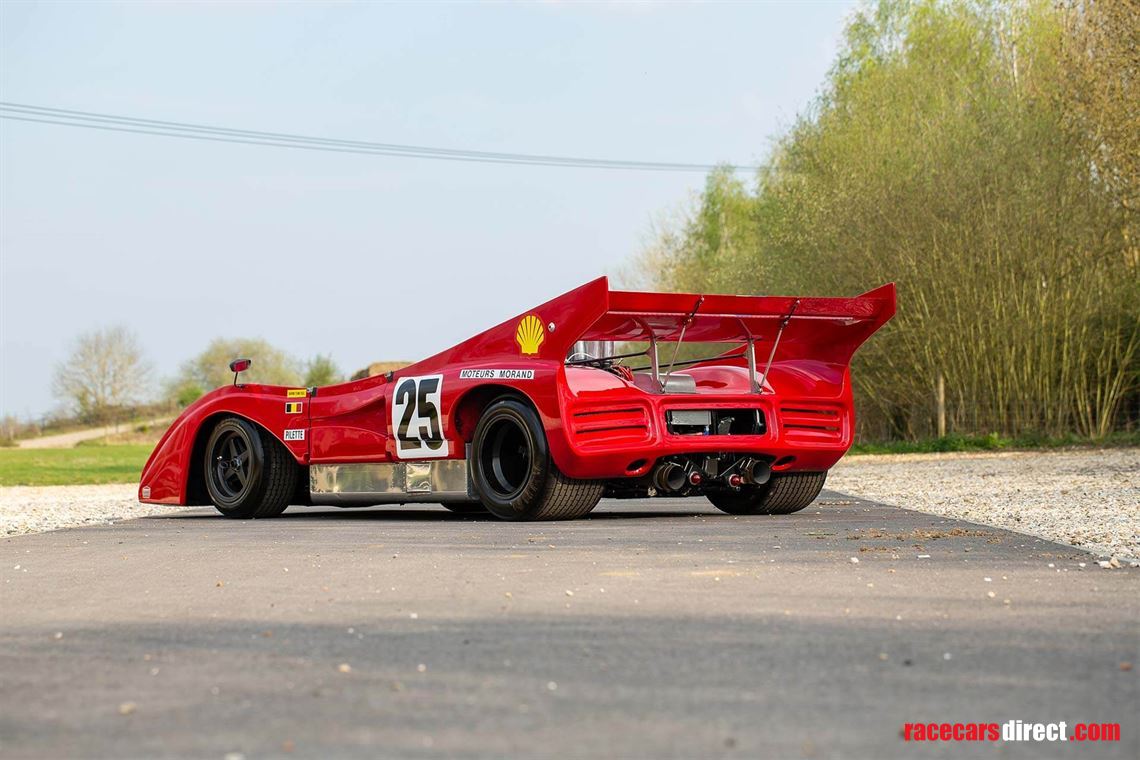 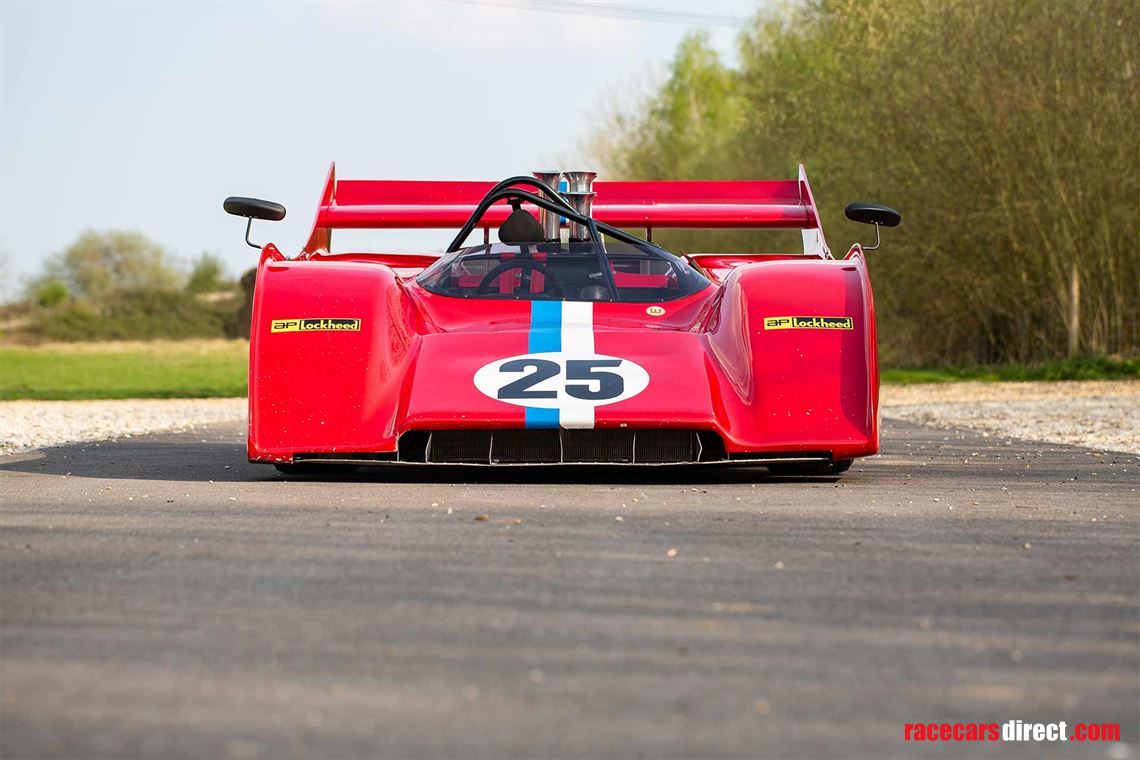 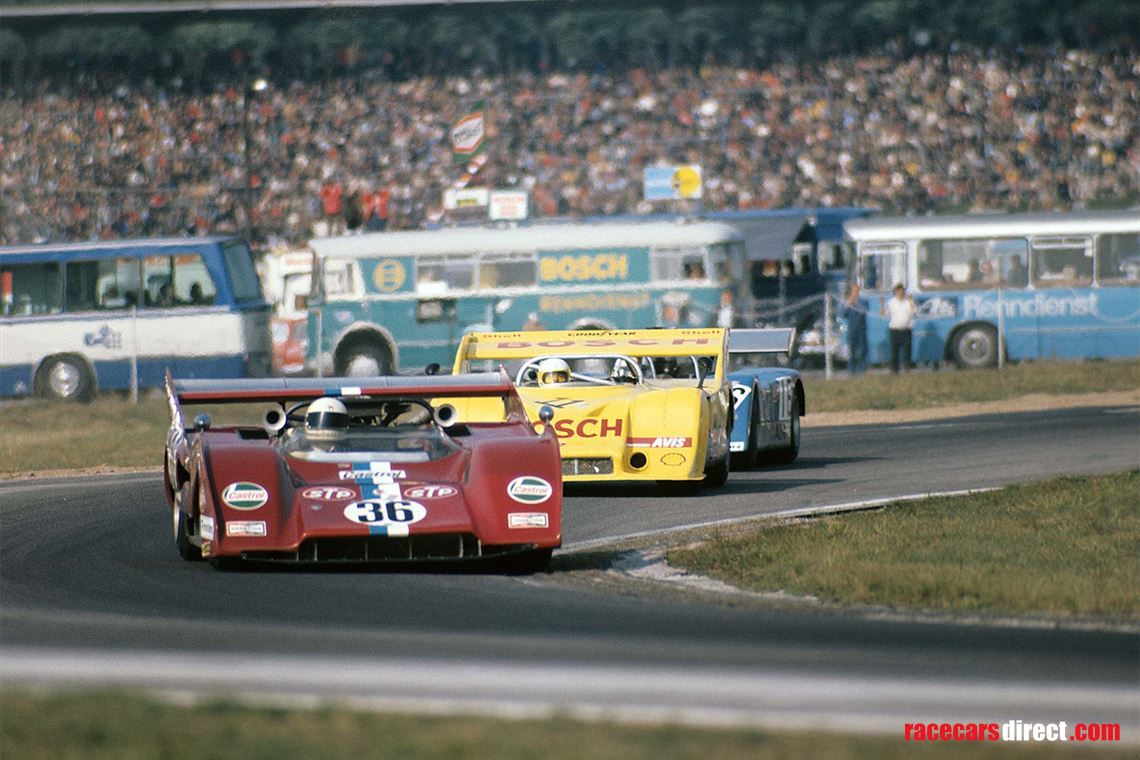 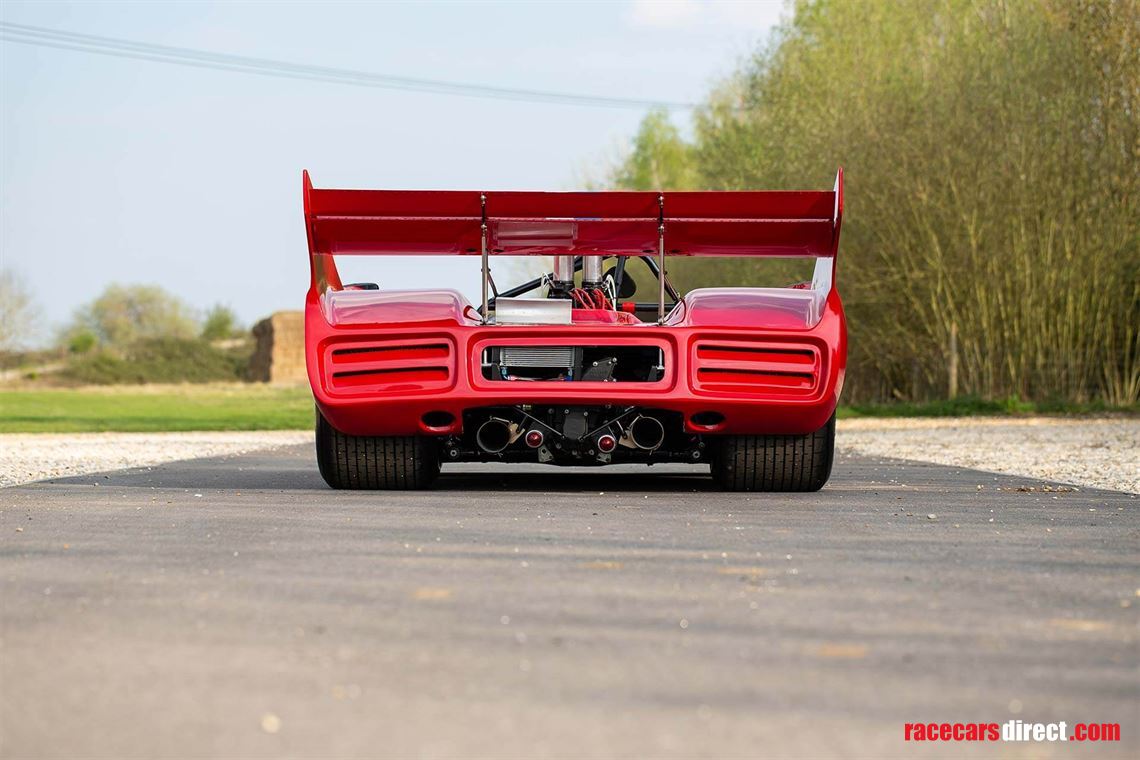 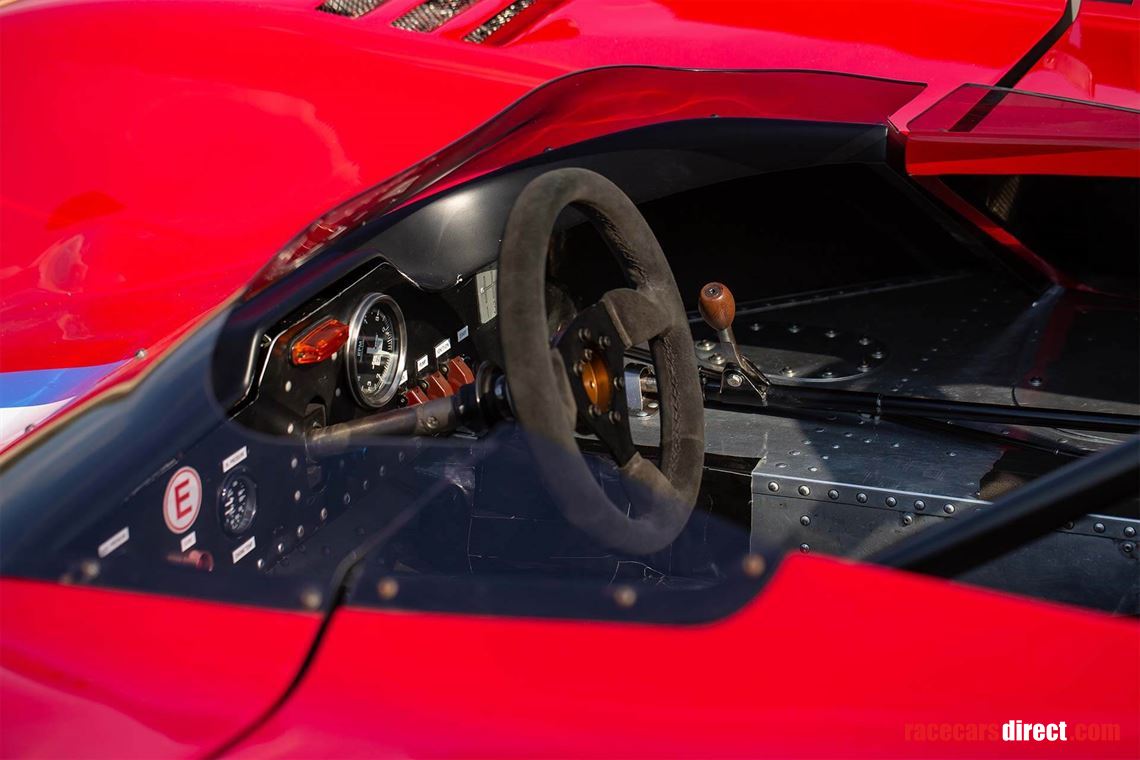 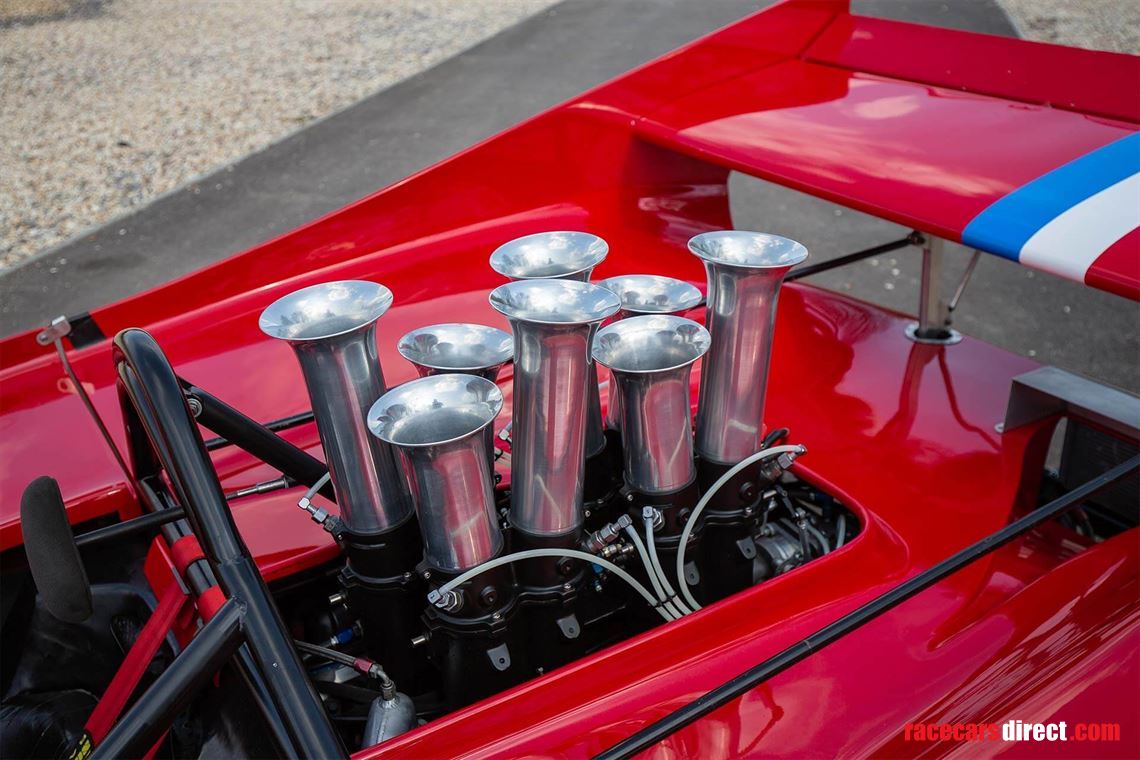 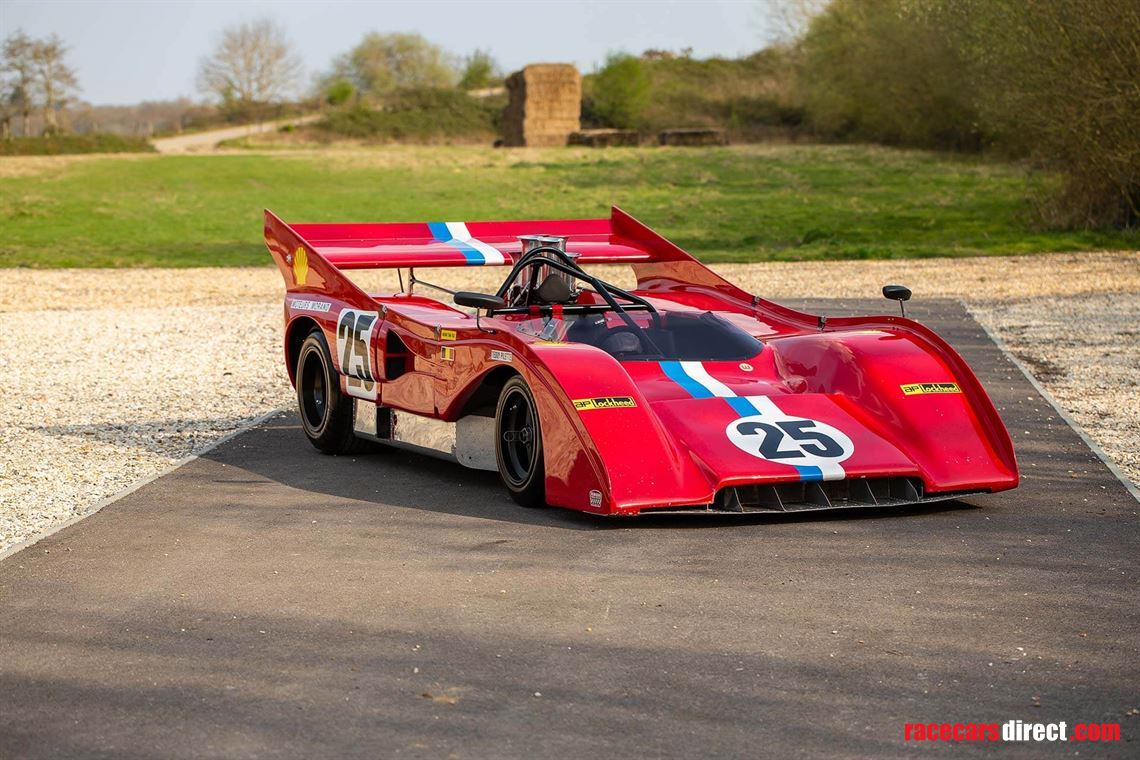 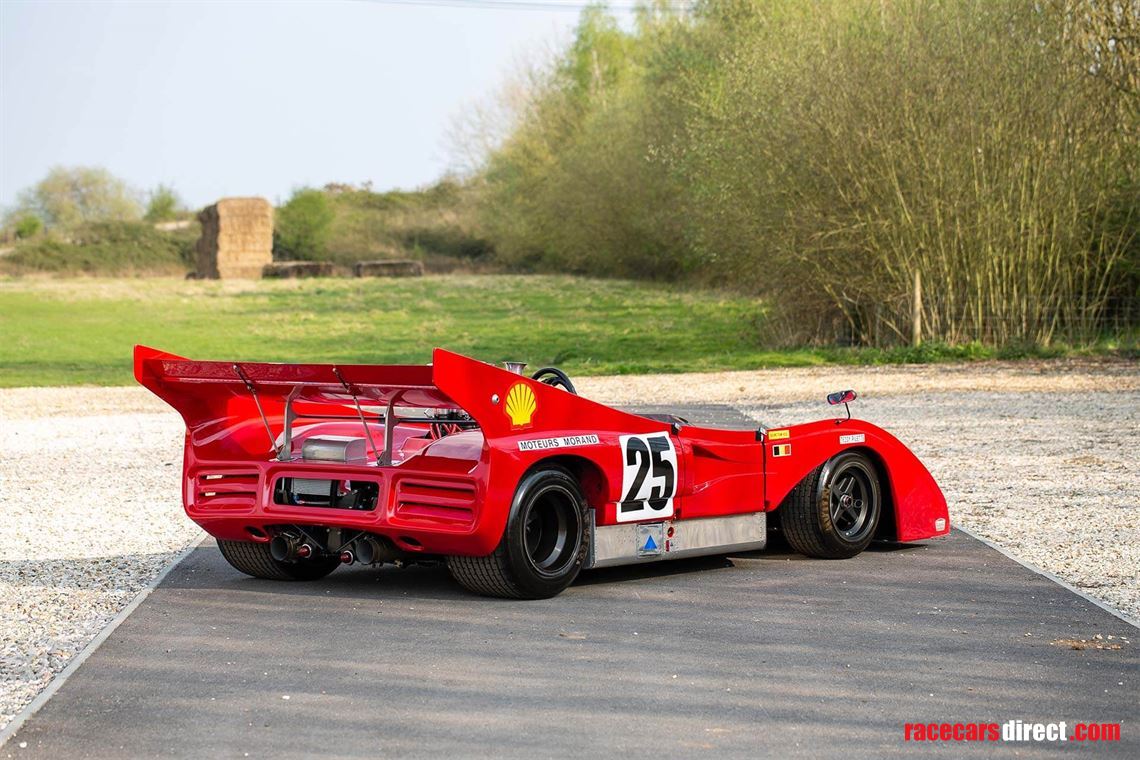 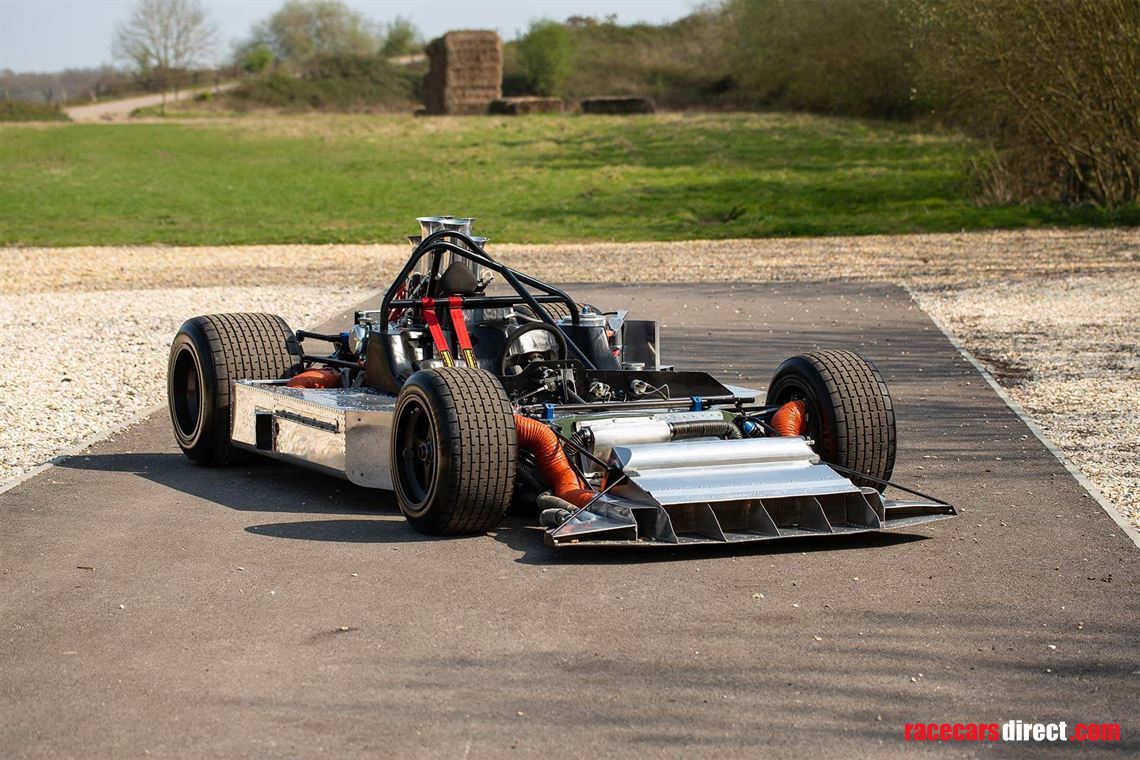 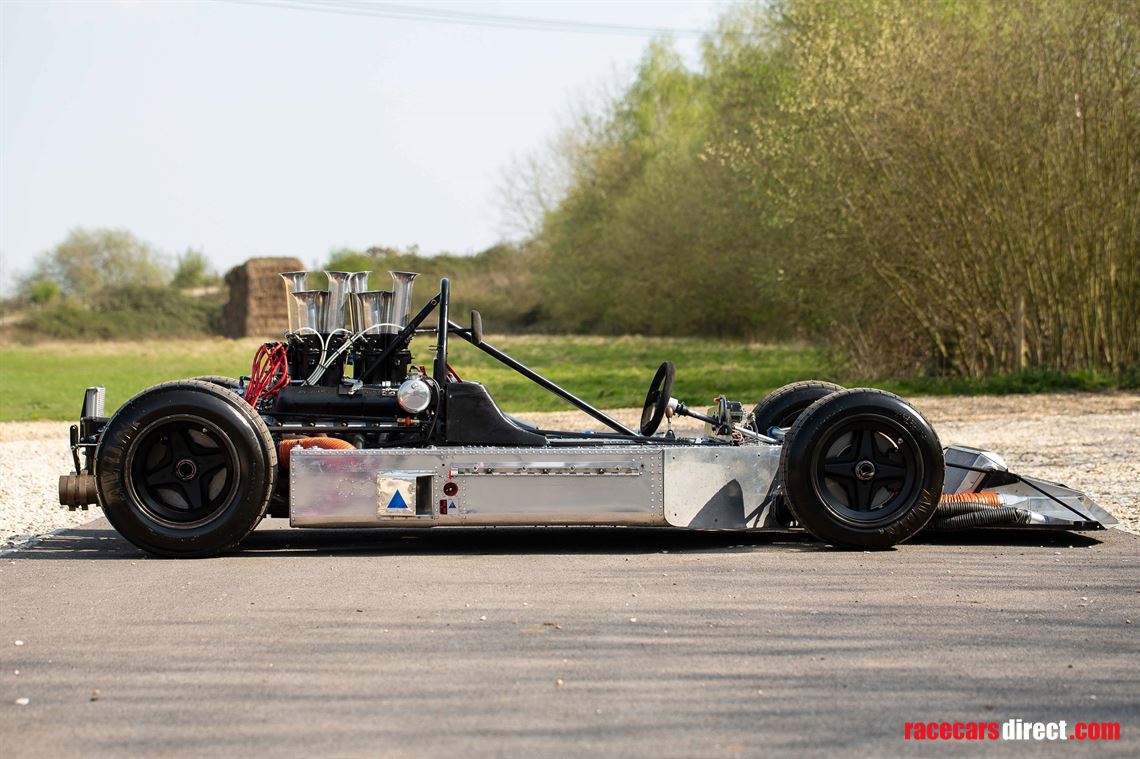 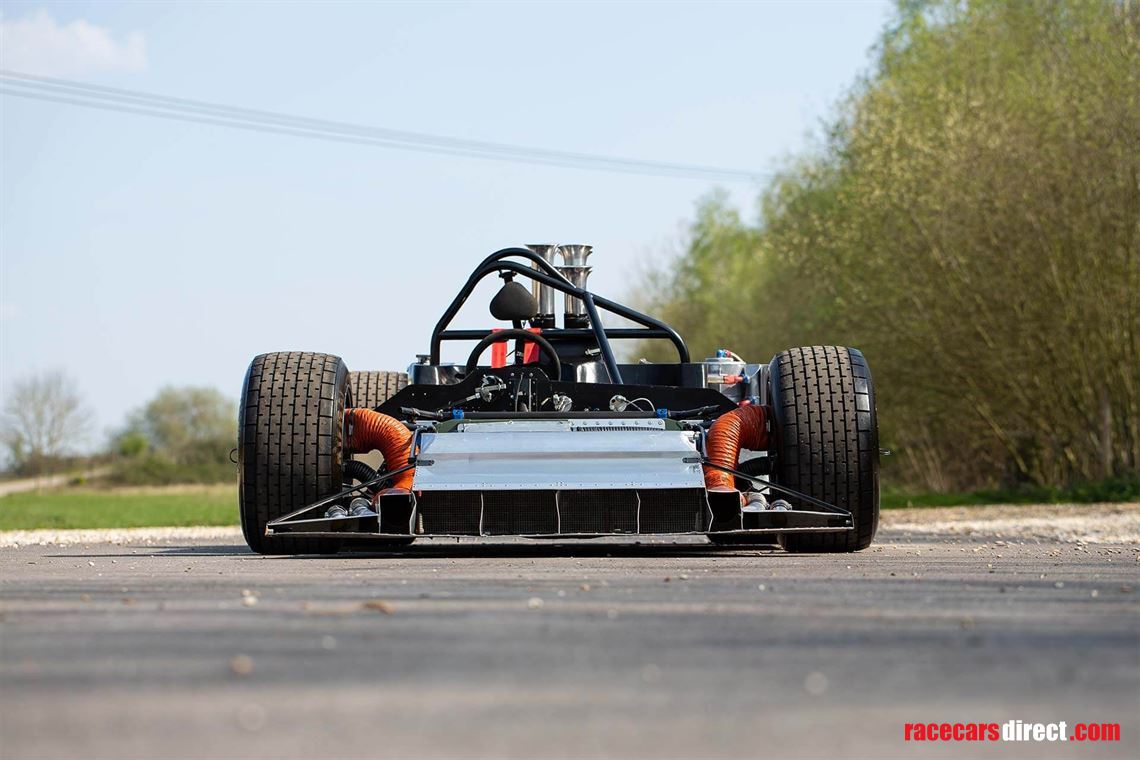 One of only 12 McLaren M8F’s built

Delivered new to Team VDS for the Interserie Championship

Competed in the 1972 and 1973 Interserie Championship

The Can-Am championship was a racing series for group 7 sports racers, with races across both Canada and America from 1966 to 1987. The FIA’s Group 7 regulations specified no engine capacity limit with both turbo and superchargers allowed, and very basic chassis regulations with no minimum weight limit. All the cars really needed for approval were two seats, bodywork which enclosed the wheels, and a roll hoop. These open regulations attracted major teams including Ferrari, McLaren, Porsche, March and Lola and resulted in one of the fastest and most exciting series of sports car racing in history. This high-powered, big-money show allowed McLaren to prove its engineering capabilities, firmly putting the UK outfit back on the map. In Europe, the Can-Am equivalent was the Interserie Championship, with near identical regulations seeing the same cars, manufacturers and teams competing in both championships.

Bruce McLaren and his team built the M8A for the 1968 Can-Am championship, with development continuing though to the M8F in 1971. The M8A kicked off a four-year winning streak for McLaren in the Can-Am championship, with this, the M8F being developed for the 1971 Cam-Am championship. Denny Hulme claimed two drivers’ championship with Bruce McLaren and Peter Revson also claiming a drivers’ title each behind the wheel of a McLaren. The M8A, M8B, M8D and M8F were focused developments of the aluminium monocoque chassis, so successful that Can-Am became known as the ‘Bruce and Denny show’.

The McLaren M8F saw three inches added to its wheelbase over its predecessor to aid braking stability, with a narrower track and revised suspension geometry to add stability. The front upright castings were straight off the McLaren Indy car and gave slightly different geometry as well as being much more rigid. The weight of the rear brakes was moved inboard next to the transaxle, with the 12” brake discs requiring revised suspension arms. The latest Hewland LG-500 MKII transaxle was chosen, distinguishable by its much beefier casing and side plates. The aluminium monocoques fuel tank sides were made from thicker material, 0.062” to prevent the fuel tanks from being punctured during racing contact, as was commonplace in the fierce Can-Am championship.

The M8F also incorporated more components manufactured from exotic materials, don’t forget this was 1971, including magnesium and titanium, with other section being manufactured from thinner aluminium. The bodywork was developed so the previous season’s add-on fences were now fully incorporated and ran the length of the body, ensuring the air flow didn’t disperse or separate over the length of the car. The rear bodywork sat lower than its predecessor’s design to allow more space for the large rear wing and the transaxle cooler NACA intake.

Team VDS was founded in 1964 by Count Rudi van der Straten, Serge Trosch and Lionel Wallman and quickly became one of the most prestigious private racing teams in Belgium and Europe. In 1966 the team were competing with Alfa Romeo GTAs in the European Touring Car Championship, later competing with the Alfa Romeo Tipo 33/2 Daytona and Alfa Romeo Giulia TZ2. By 1970 the team moved to the Lola T70 MK3B Coupe, as well as a McLaren M10B in the Tasmanian Formula 5000 championship.

Team VDS were competing in the 1971 Interserie Championship with a McLaren M8E, before receiving McLaren’s latest offering, this, the M8F. As was common in this era of competition, the car was sold without an engine, allowing the team or owner to choose exactly as they wished, seeing as there was no regulation on engine size or manufacturer etc. This McLaren M8F was fitted with an incredible 7,500 cc big-block alloy Chevrolet V8 engine, fitted with twin Garrett AiResearch turbochargers! This monstrous engine was developed by Swiss engine experts, Moteurs Morand, and was reputed to generate a ground-shaking 930 bhp!

Team VDS elected Belgian driver, Teddy Pilette, to drive this beast in the 1972 and 1973 Interserie Championship, competing at the Osterreichring in Austria, Hockenheimring, Norisring street circuit and Nürburgring in Germany. The highlight results included qualifying and finishing 3rd at the October Interserie round at the Hockenheimring. The car was finished in red, with white and blue stripes running the length of the car in the centre, just as it is presented today.

The 1972 season saw further development, with this M8F being fitted with a revised nose section similar to its main competition, the Porsche 917/10, with a raised centre section and round air intakes for front brake cooling. Teddy Pilette was again chosen to pilot this M8F, competing at the Nurburgring, Norisring and Hockenheimring in German, Imola in Italy and Silverstone in England.

Once its competition days were over, this McLaren M8F returning to England and was displayed at the Trojan Racing private museum. In the 1980’s this car was also displayed in the world-famous Tom Wheatcroft Museum at Donington Park in England, before being purchased by Charlie Agg, son of Trojan Racing founder, Peter Agg. Charlie Agg then set about restoring the car ready for competition in the Steinberger Supersport Series around Europe before being fitted with a naturally aspirated Chevrolet V8.

In 1997 this car was purchased by Victory Myette who competed with it in the Supersports Cup, before it was bought by enthusiastic and accomplished historic racer, Michiel Campagne who refinished the car in black. Under this ownership the car was maintained by Tachyon Motorsport and regularly competed in the Interserie Revival and Masters Can-Am events across Europe, even visiting the South African circuit of Killarney.

Importantly, in 2005 this car received its McLaren by Trojan Verification, in which it was noted as ‘The most original chassis in existence. Clean unquestionable provenance. The most authentic and original M8F in the world.’

Bought by its current owner in 2014, this McLaren M8F has competed in the Phillip Island and Adelaide Motorsport Festivals in 201 and 2018, before returning to England in early 2020.

Interserie and Can-Am are widely considered the high point of sports car racing, with manufacturers throwing unlimited money and manpower to win the ultimate, unrestricted series, to prove that their cars and team were faster than everyone else. It is a formula that will never be replicated, but this McLaren M8F offers the opportunity for you to experience one of the most successful manufacturers’ creations.

Take it to your favourite track, teach people about noise, and most importantly, enjoy the incredible power and torque offered by this 8.4 litre Chevrolet V8 engine!