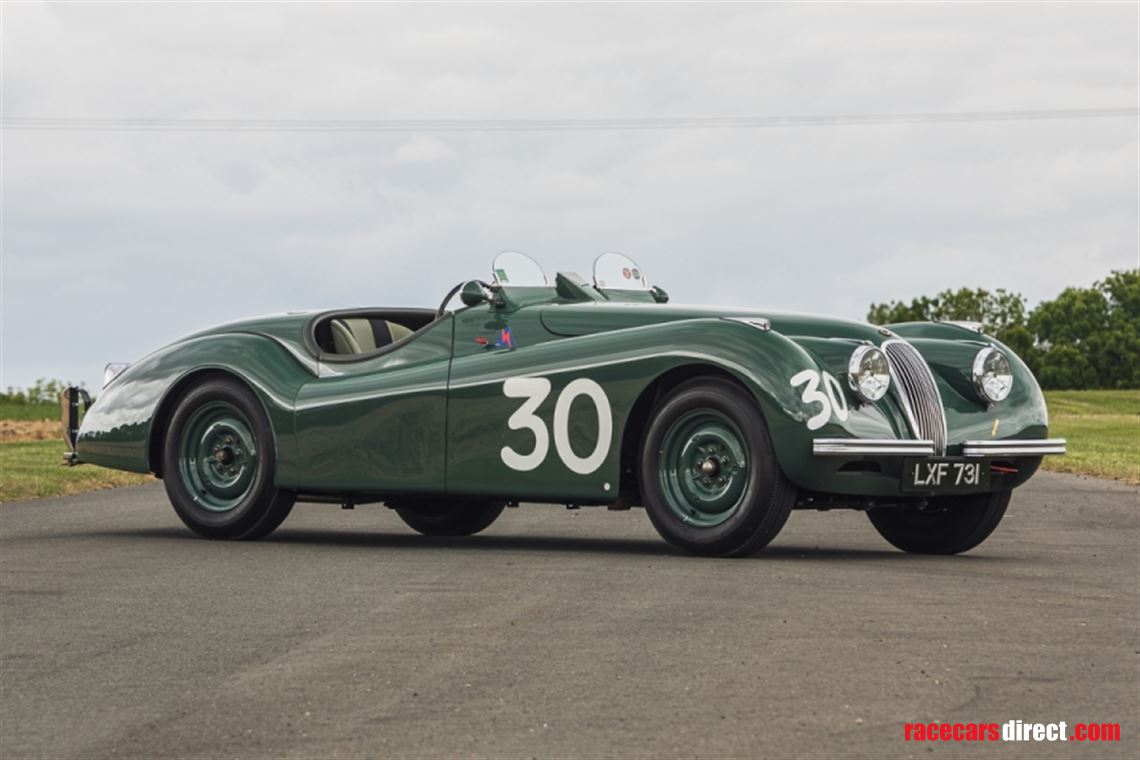 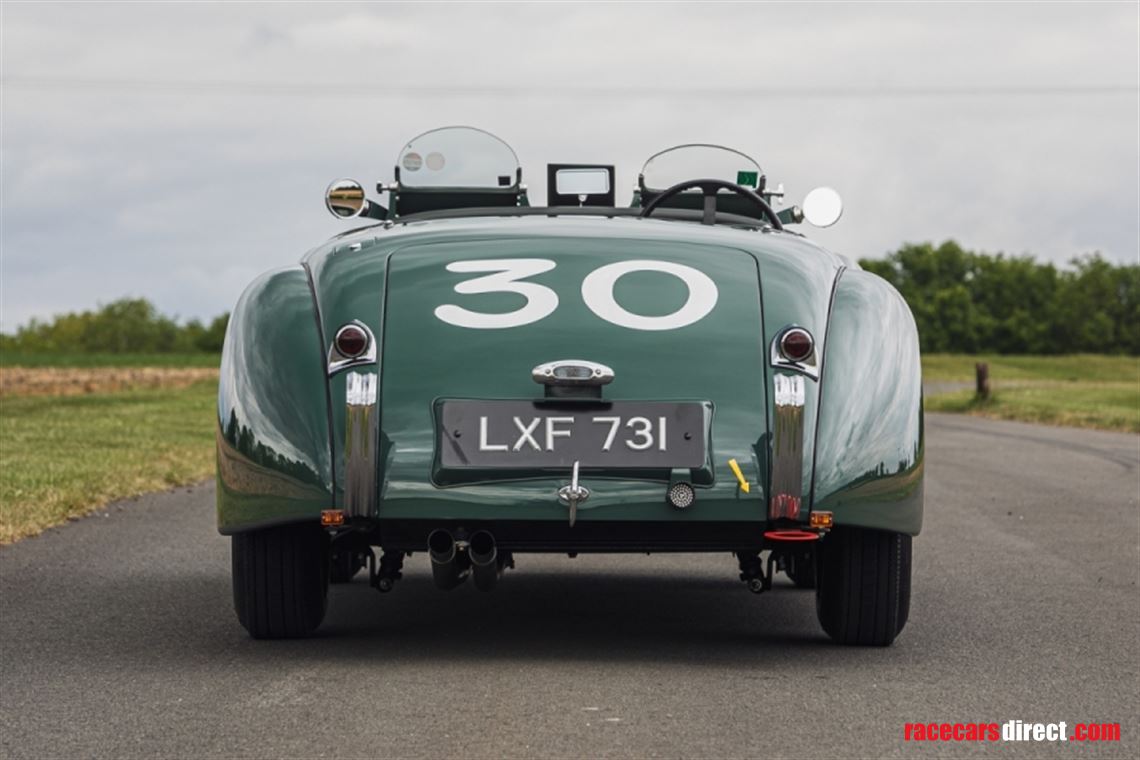 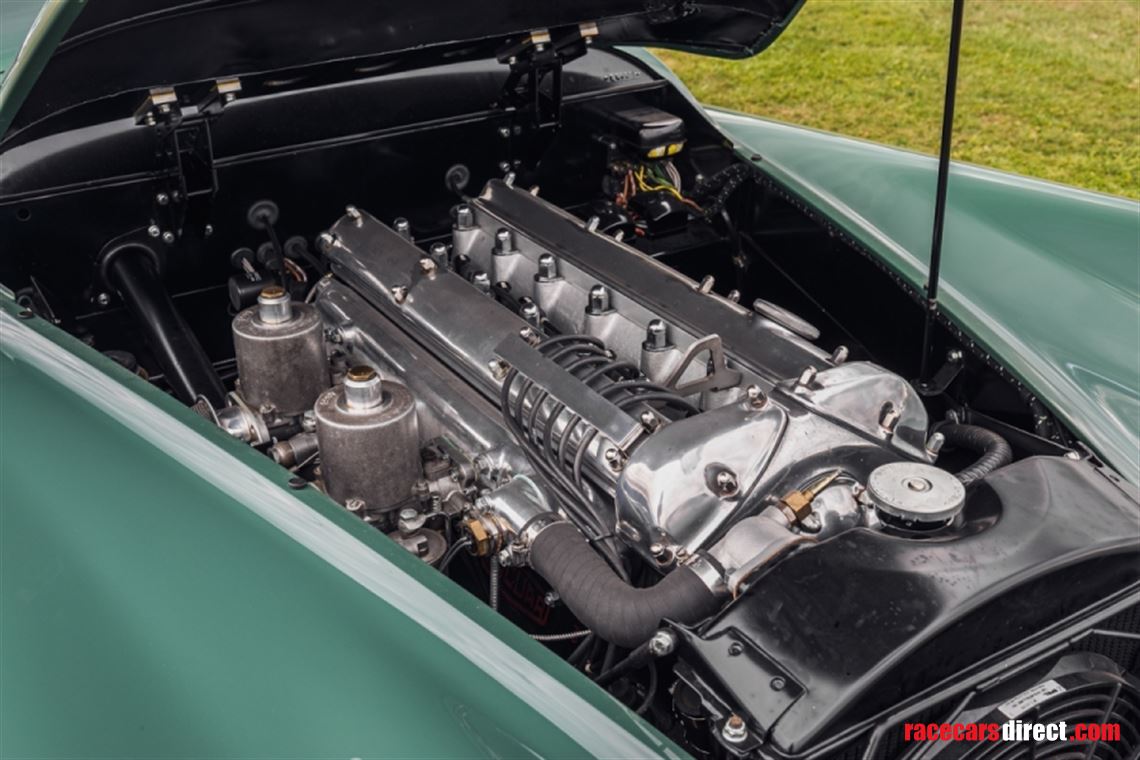 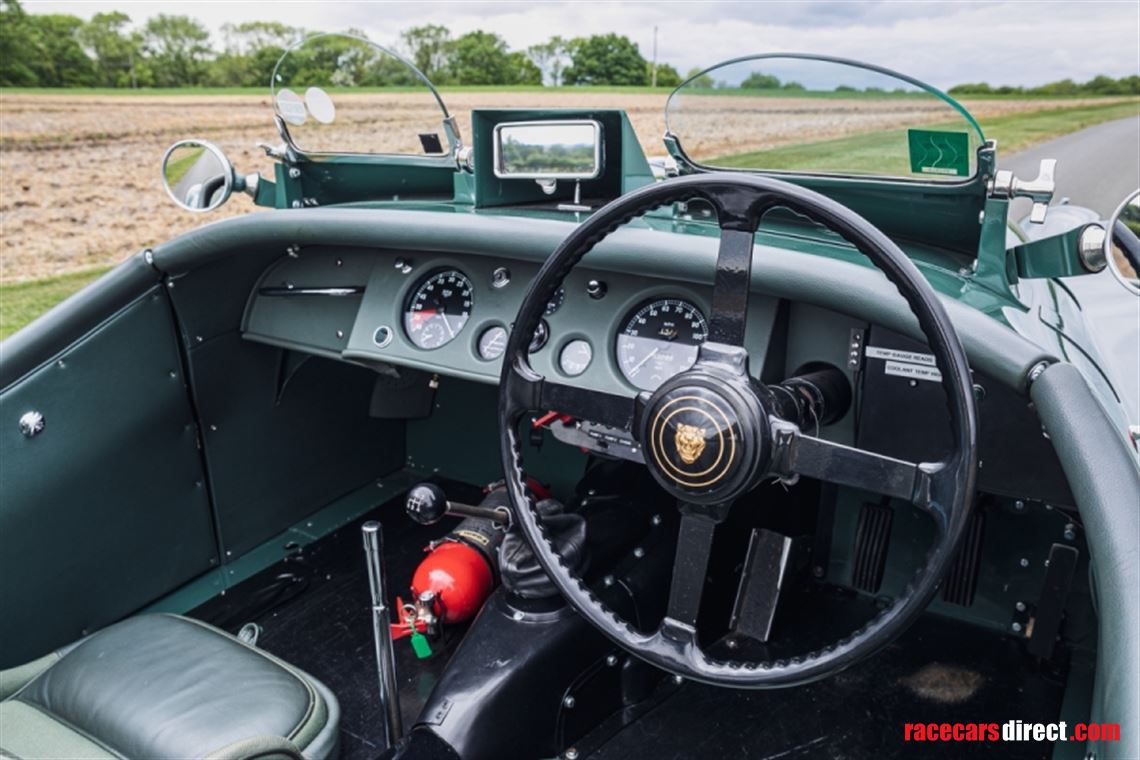 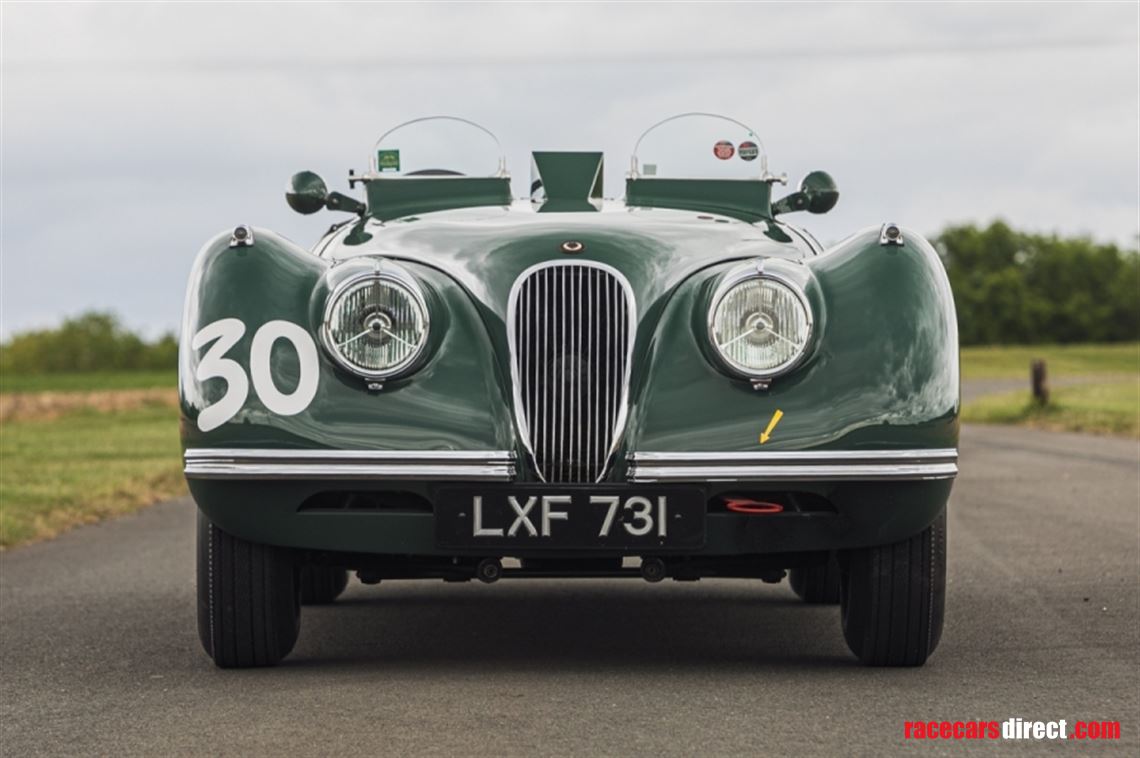 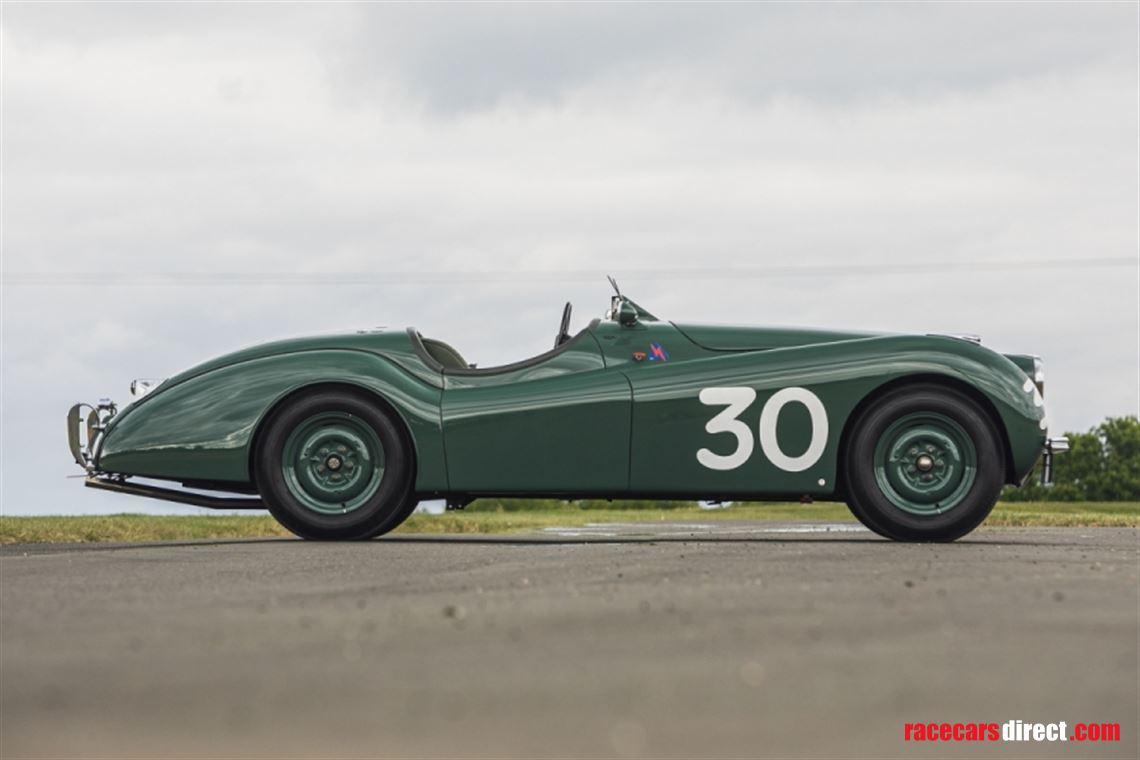 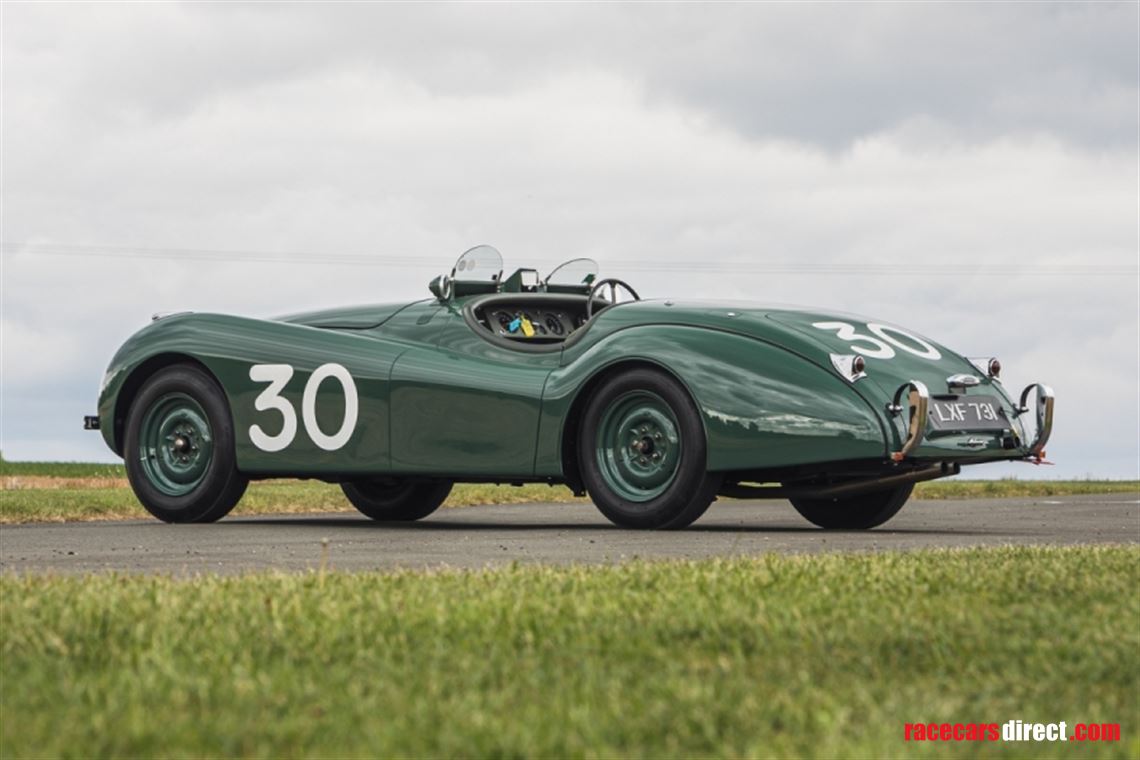 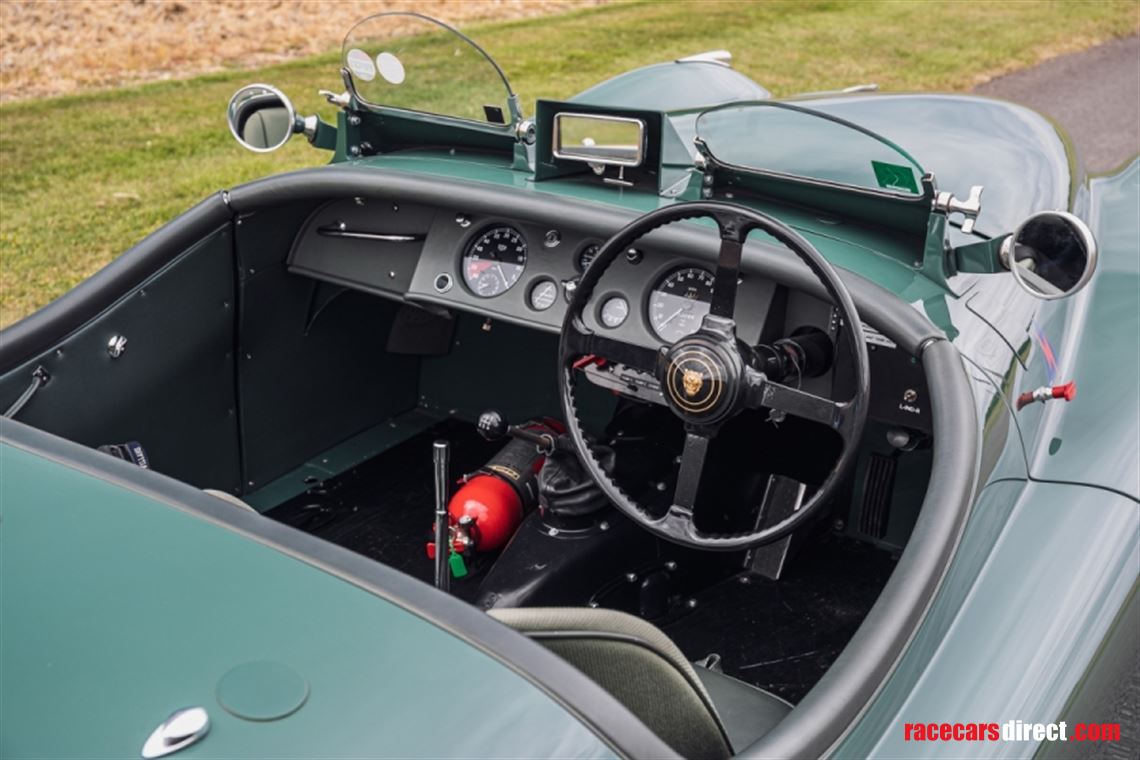 To be offered by Silverstone Auctions at the Silverstone Classic Live Online Auction on the 1st August. To book an appointment to view the car please contact the office on 01926 691 141.

LXF 731 (660332) came off the Browns Lane assembly line on 22/11/1950 and was delivered, through Henlys of London, to its first owner a Mr Philip Fotheringham-Parker a little over two weeks later classically finished in Suede Green with a matching interior. Fotheringham-Parker was a typical amateur racing driver of the immediate pre-and post-war years combining sufficient levels of wealth, talent and enthusiasm to enjoy a respectable level of success in both national and international events. His first competition forays were with an Alvis at Brooklands where, in 1932, he had the unpleasant experience of losing control in the wet and going over the top of the banking. Escaping this accident without serious injury he subsequently drove a Lancia Lambda and Ford V8 in other meetings at Brooklands and Donington Park.

Unfortunately the outbreak of the Second World War interrupted his promising career and by the time racing had re-started he was already 38 years of age and considerably older than many up and coming drivers, including his good friend ex-Lysander pilot and ebullient character, Duncan Hamilton. In spite of this, Fotheringham-Parker continued to race and achieved some success with his pre-war Maserati including a second place in the Wakefield trophy at the Curragh in 1949.

With the successful competition debut of the XK120 at Silverstone in 1949, Fotheringham-Parker was naturally keen to join the growing list of drivers who were keen to acquire one for themselves and immediately confirmed his order. When the car arrived in late 1950, he promptly honoured the promise he had made earlier in the year and lent it to Hamilton to prepare and race at national and international events throughout 1951. This was the start of a very fruitful relationship between the Jaguar marque and Hamilton, culminating in victories with the works team at Le Mans in 1953 and Rheims in 1956.

The first recorded event for LXF 731 was the 1-hour production car race at the Daily Express Silverstone International Trophy Meeting held on 05/05/1951. With Hamilton at the wheel, LXF 731 came home in third place behind Stirling Moss and Charles Dodson. The next outing at the Portuguese Grand Prix on June 17th was less successful with Hamilton retiring but he soon made amends by securing two victories in the XK120 at Boreham in the Williams Lyons Trophy race and the Unlimited race on August 11th. A week later Fotheringham-Parker himself would earn a brace of second places at Goodwood in the Sports Car and Handicap races at the BARC 7th members meeting while Hamilton would complement this with two handicap second places of his own. At the September Goodwood International Meeting, Fotheringham-Parker would finish a respectable fifth in the Sports Car race and third in the Handicap race against strong opposition in both events including Moss driving the new C-Type, chassis XKC001. An entry at Winfield in October wrapped up the 1951 season and, with the arrival of Jaguar’s new sports racer, both Hamilton and Fotheringham-Parker decided that a faster car was needed for 1952; consequently Hamilton upgraded to a C-type, driving XKC004, and Fotheringham-Parker moved on to drive an HWM-Alta.

However, this was not the end of LXF 731’s competition career and the car was soon seen in action at the hands of C M Kemp on the RAC and Morecambe Rallies in the spring of 1952. It returned to Silverstone on August 30th where Kemp took part in the 750 MC Six Hour Relay race driving for the Sporting Owner Drivers Club team who finished fourth overall. His XK120 was the highest finisher beating those of more accomplished drivers such as Jim Swift and Denis O’Mara Taylor who had been rather severely handicapped. Competition appearances for LXF 731 declined thereafter but it participated in the MCC race in September 1952 and then in occasional minor events in the later 1950s and 1960s as typified by R Brodie’s entry in the car at the Dunfermline driving tests. The car subsequently found its way to Northern Ireland where it was bought by David Bazire and had returned to England by 1968.

The car was fully restored in 2011 to its early race specification and has since been maintained regardless of cost as is evident from its current immaculate presentation. We understand that during the last few years, LXF 731 has successfully completed the Mille Miglia on two occasions and the Le Mans Legends Support Race.

Offered with a comprehensive history file, including period photos and correspondence between Bazire and Hamilton, this is a unique opportunity to acquire an historically important Jaguar that played a key role in the early career of one of Britain’s most charismatic and successful drivers of the 1950s.