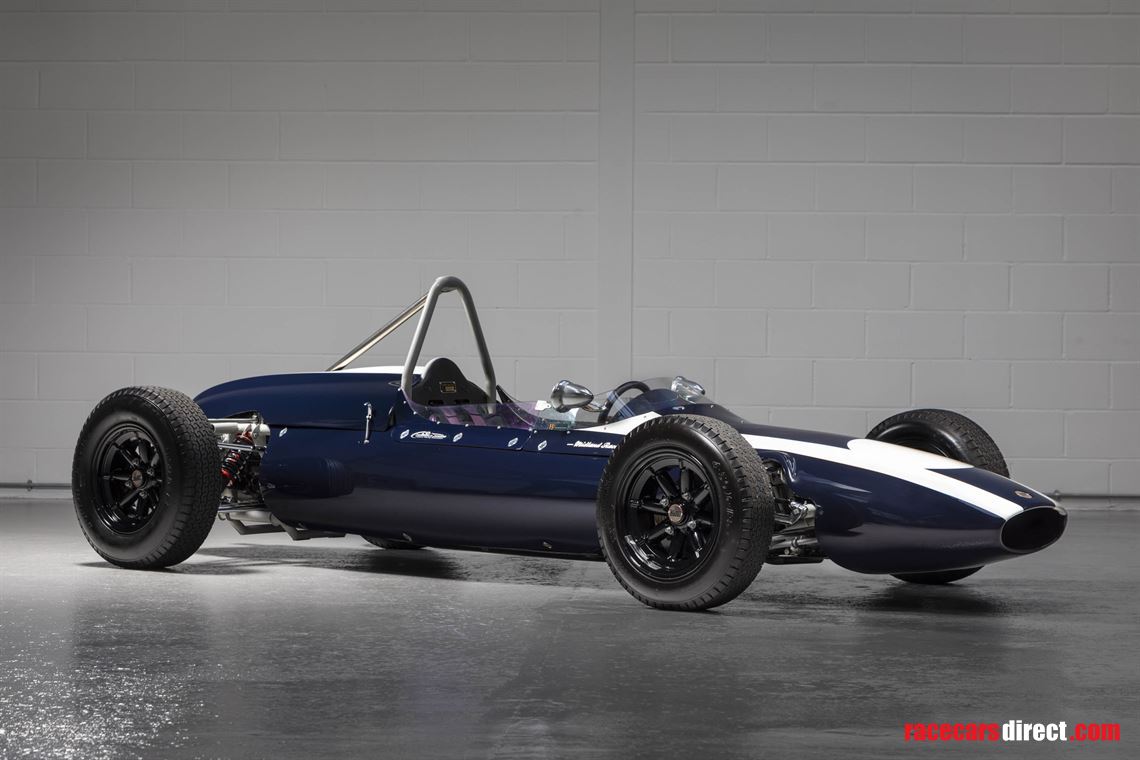 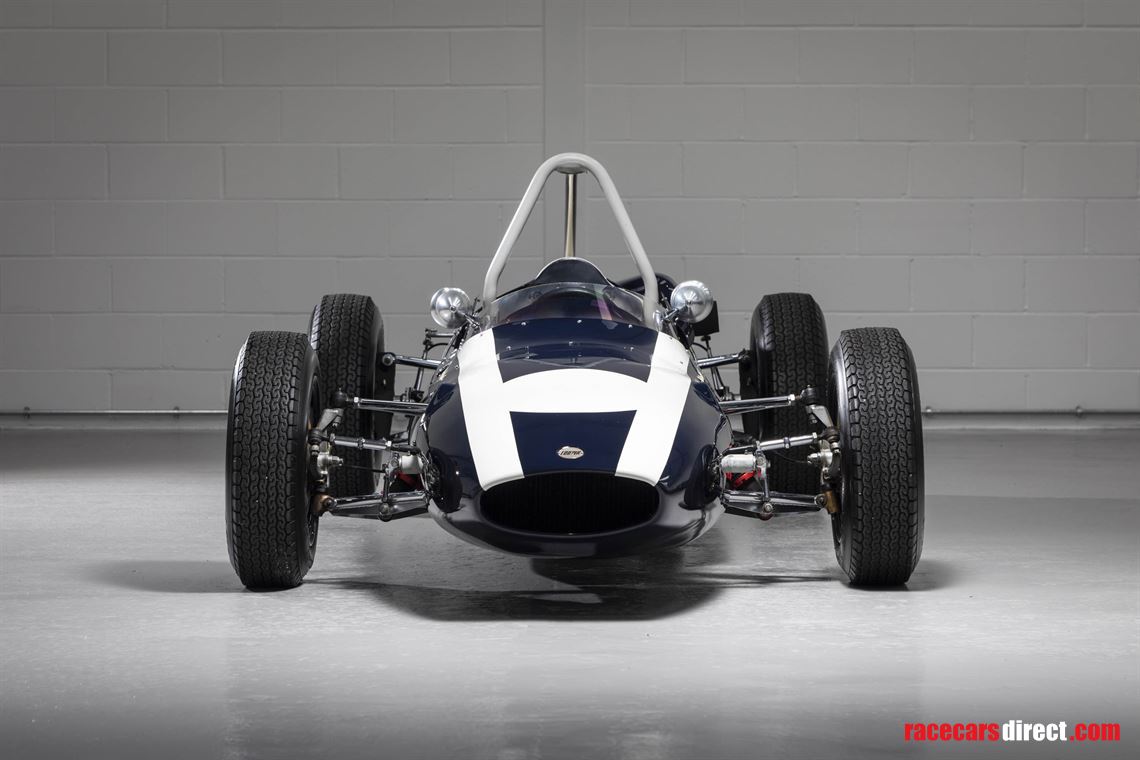 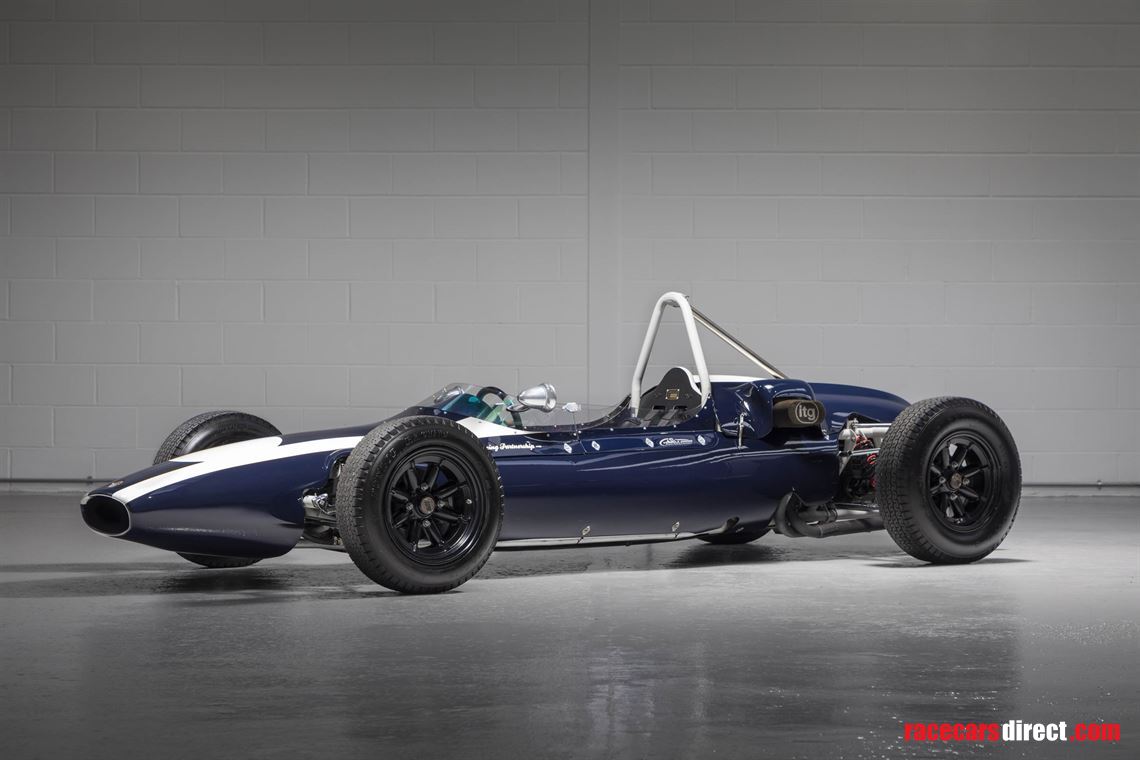 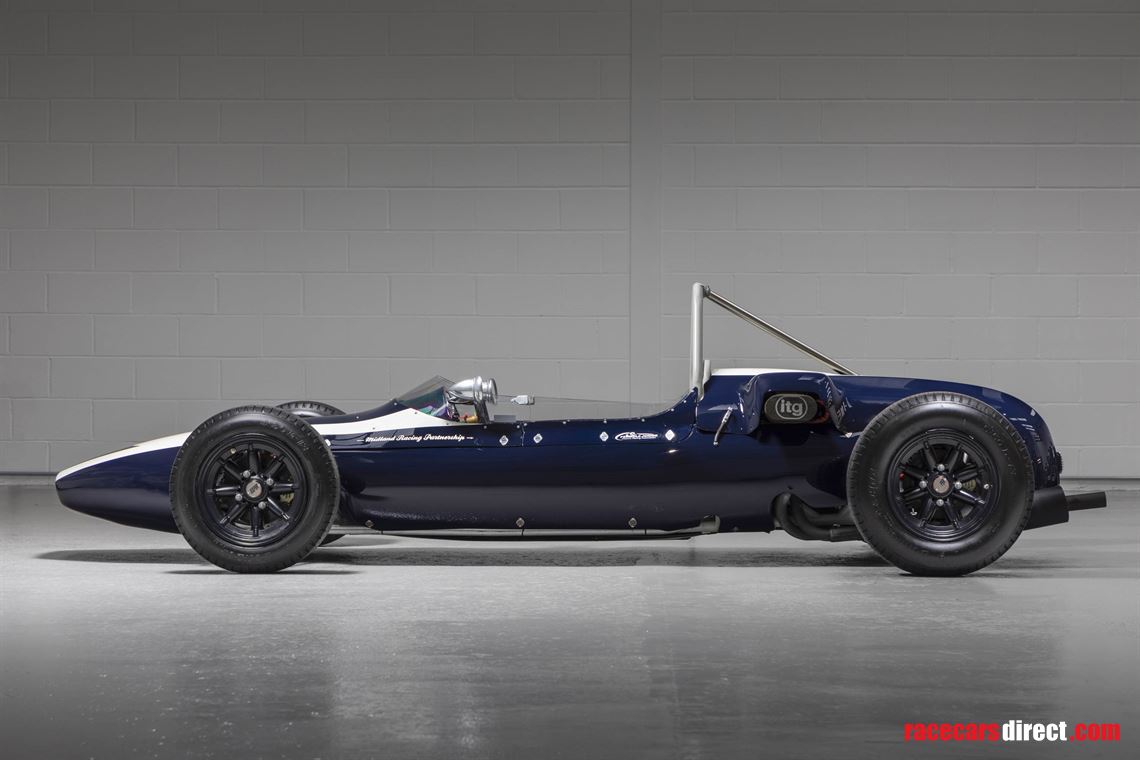 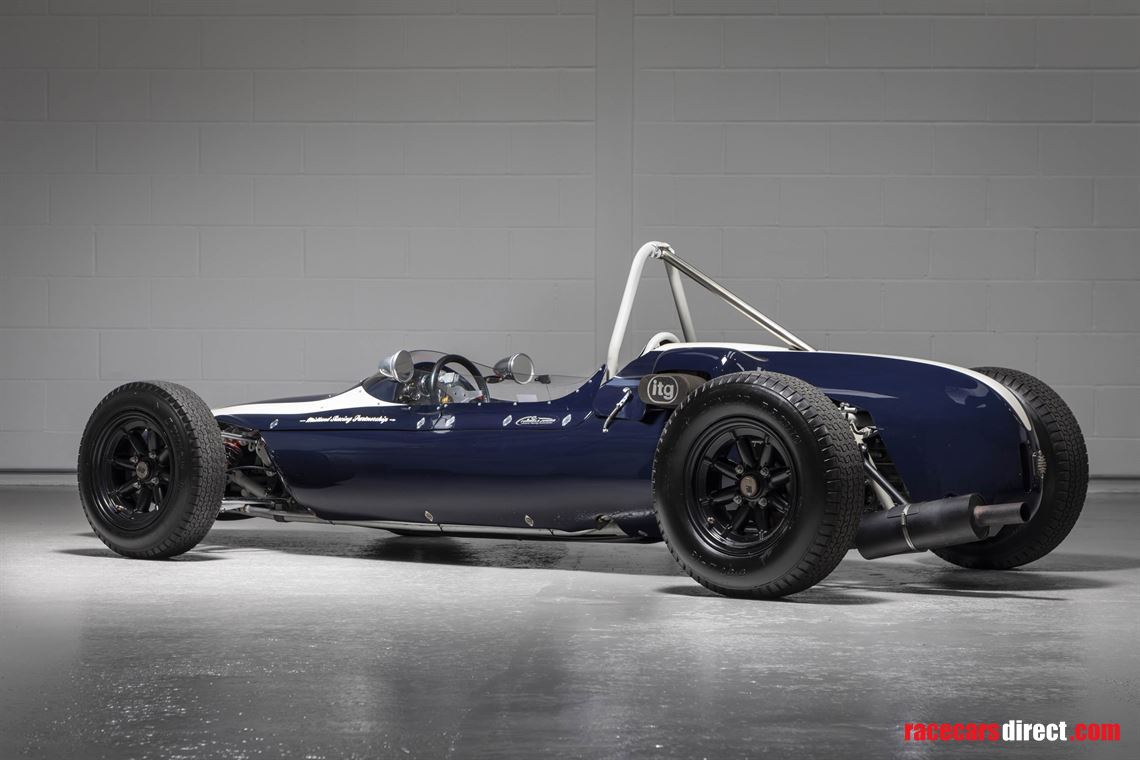 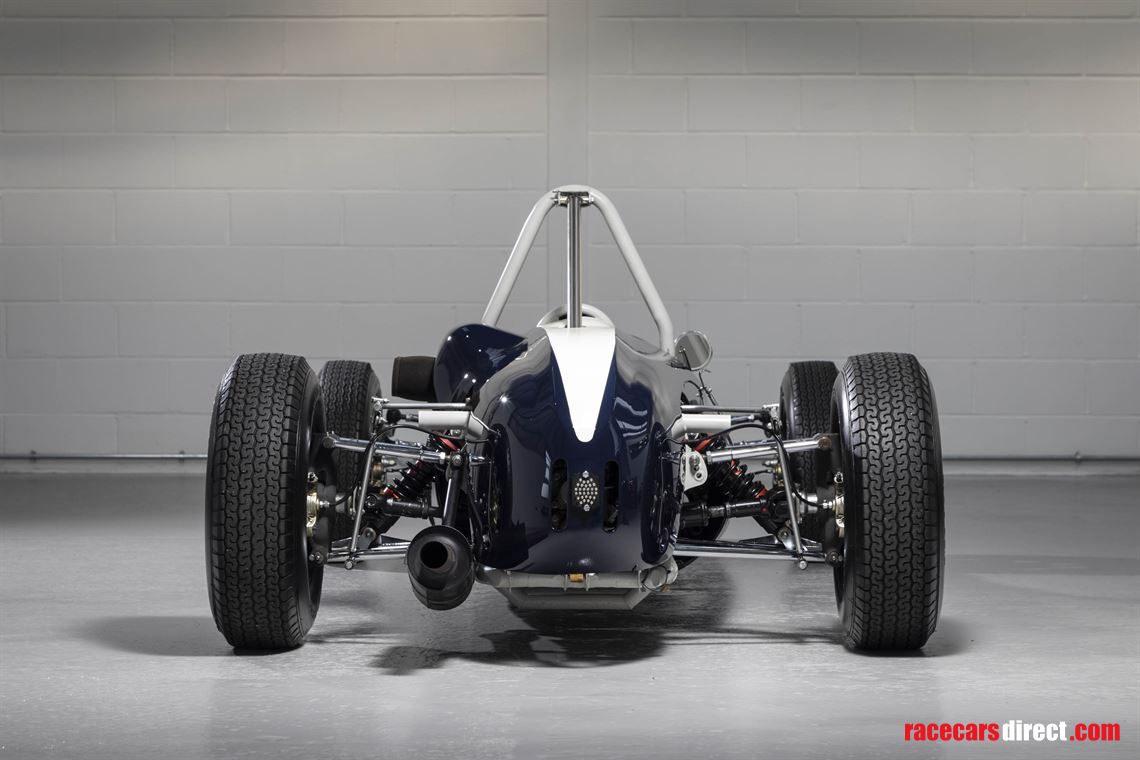 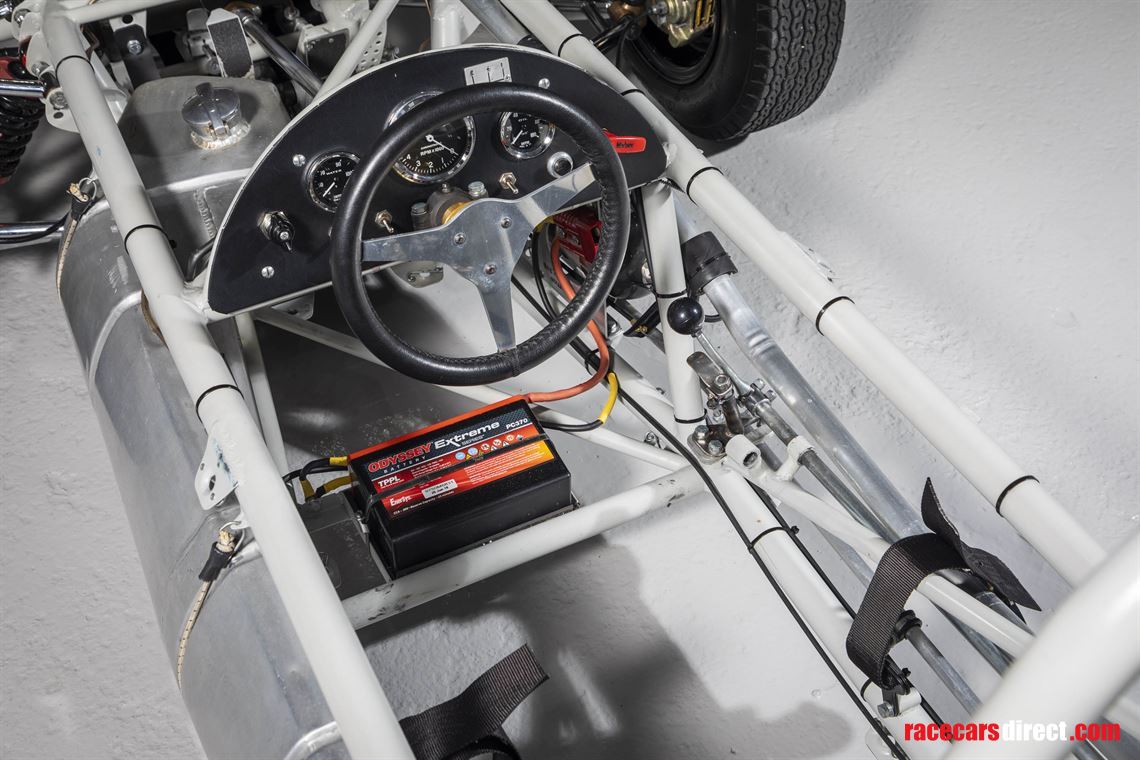 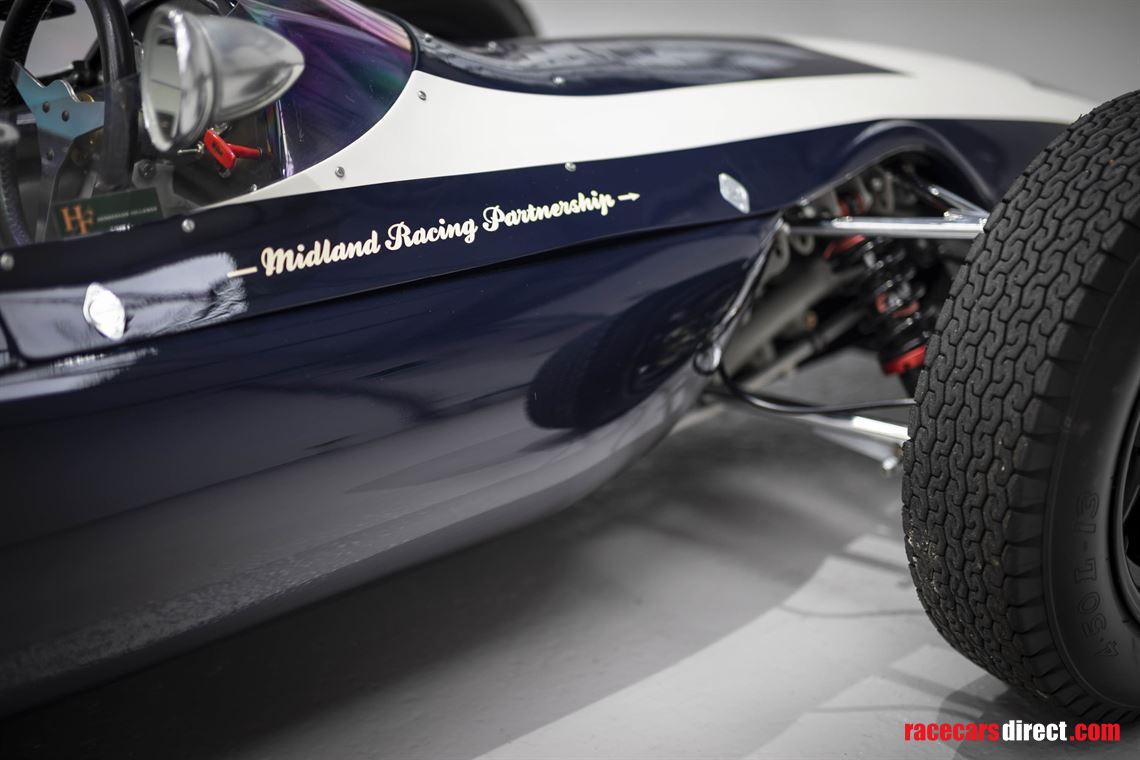 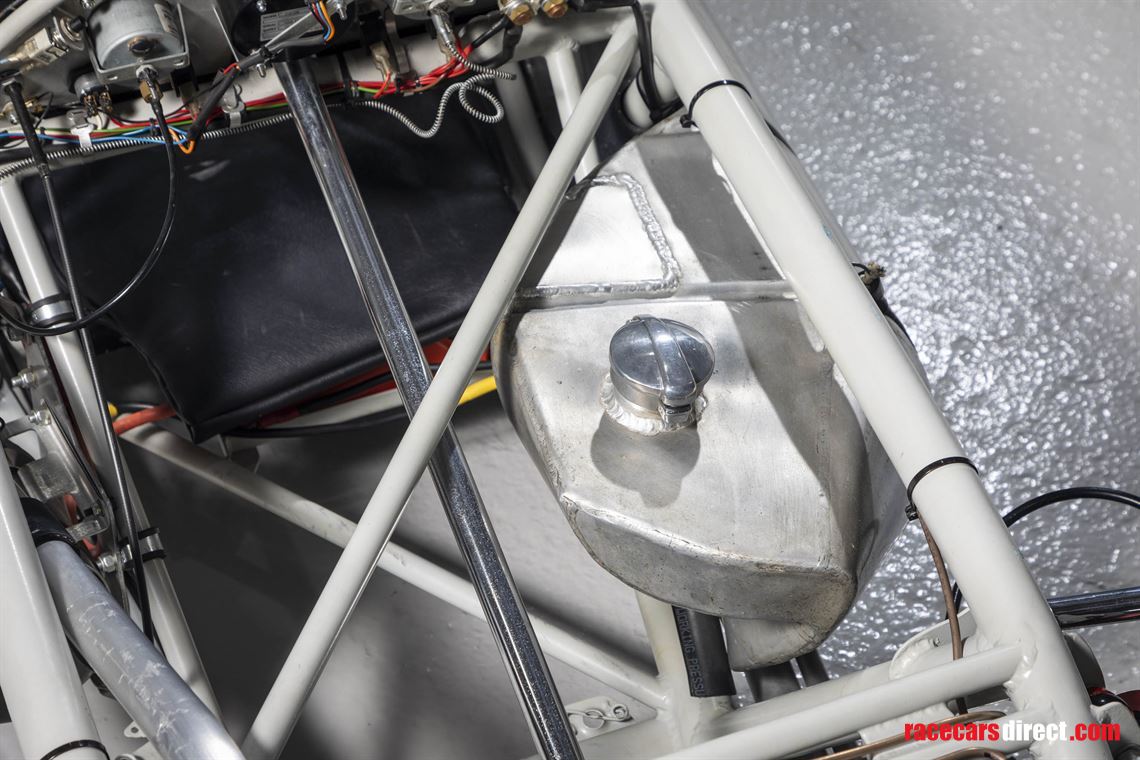 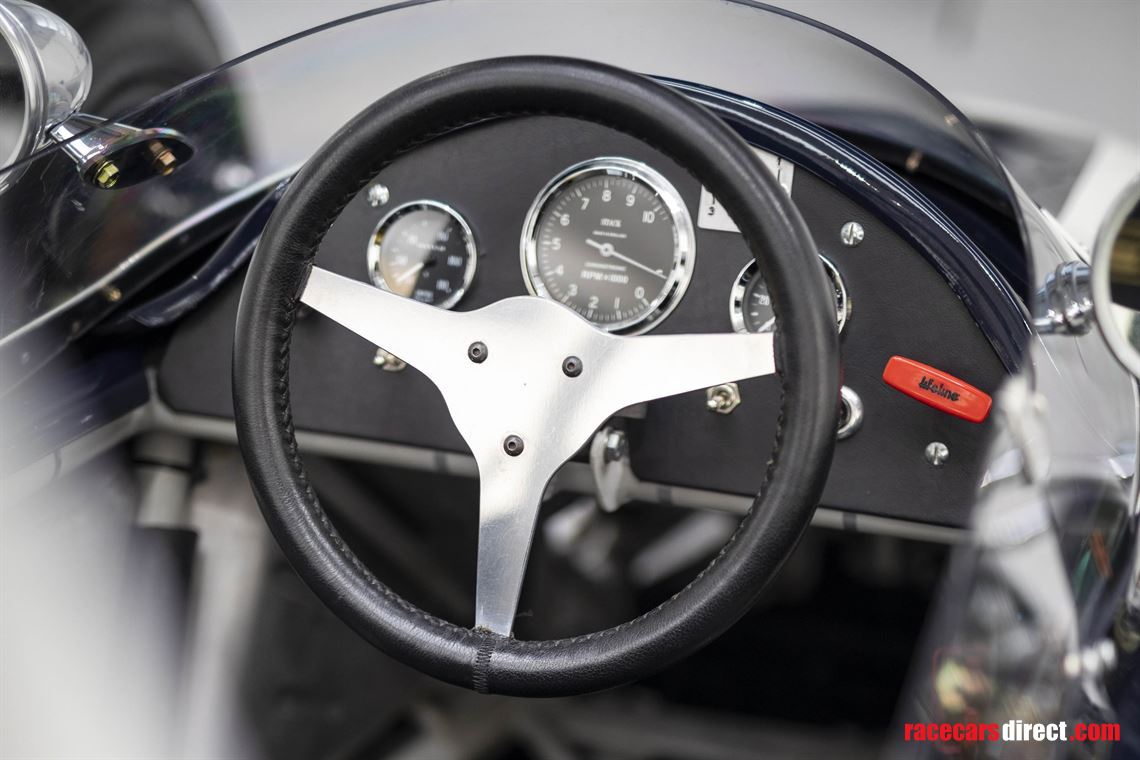 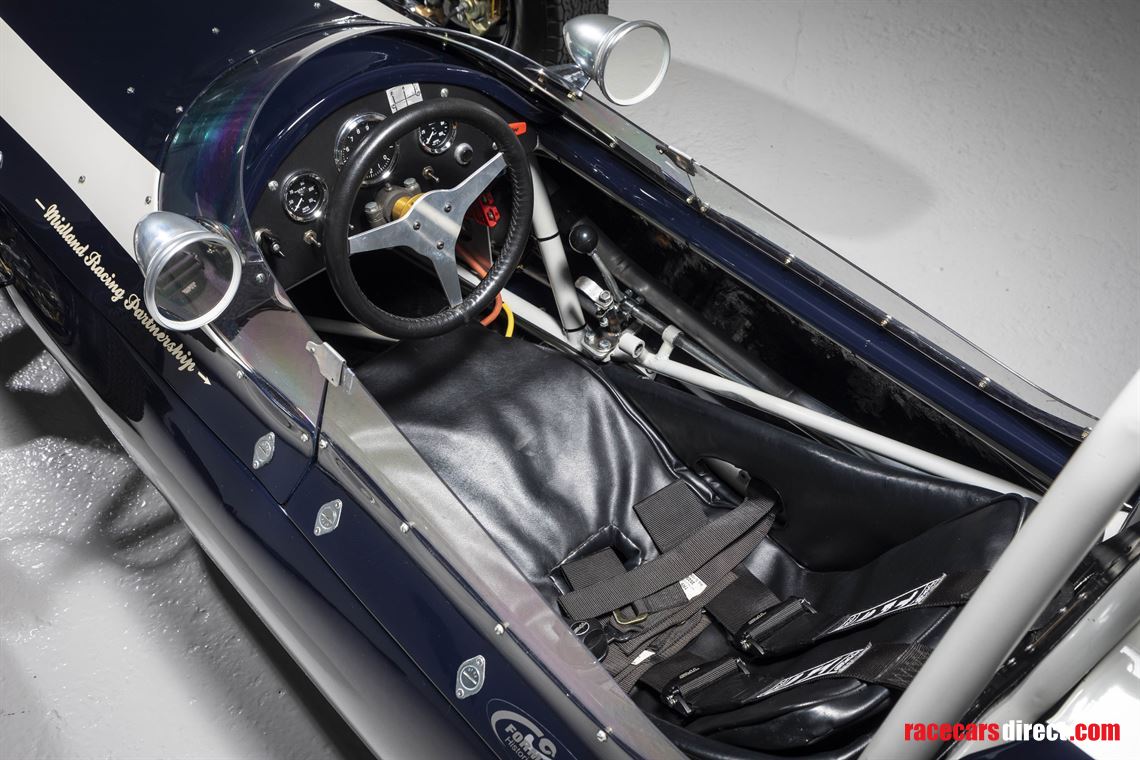 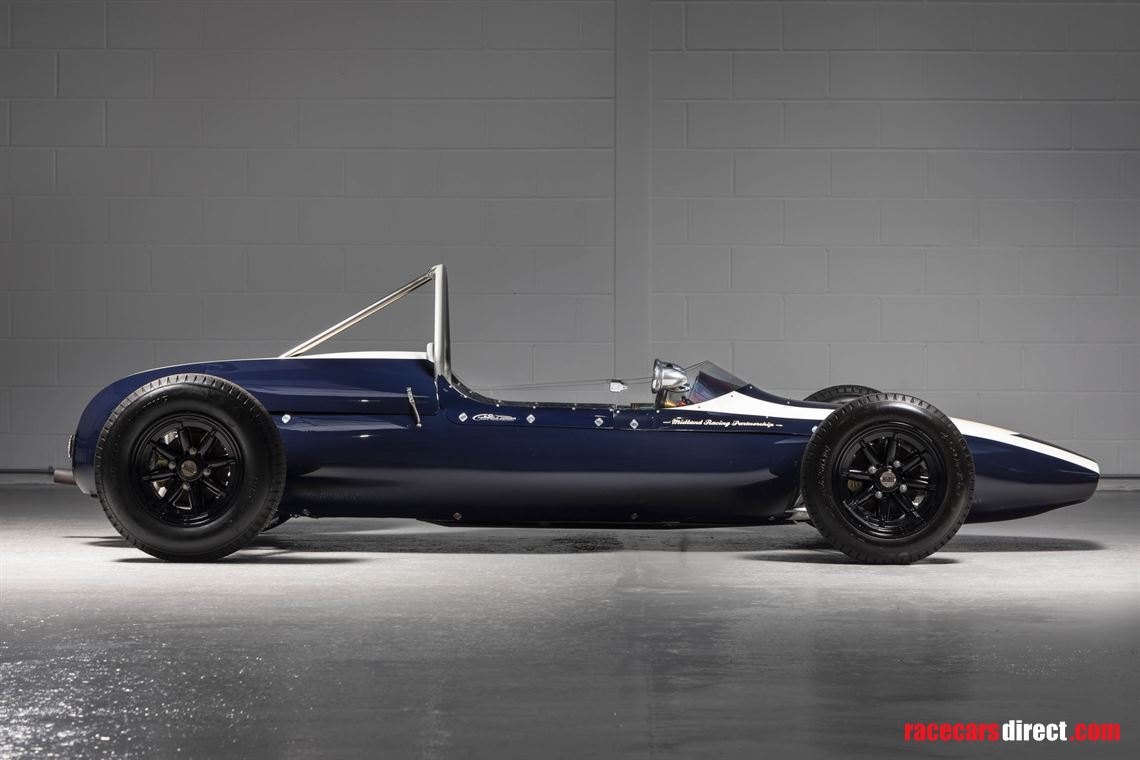 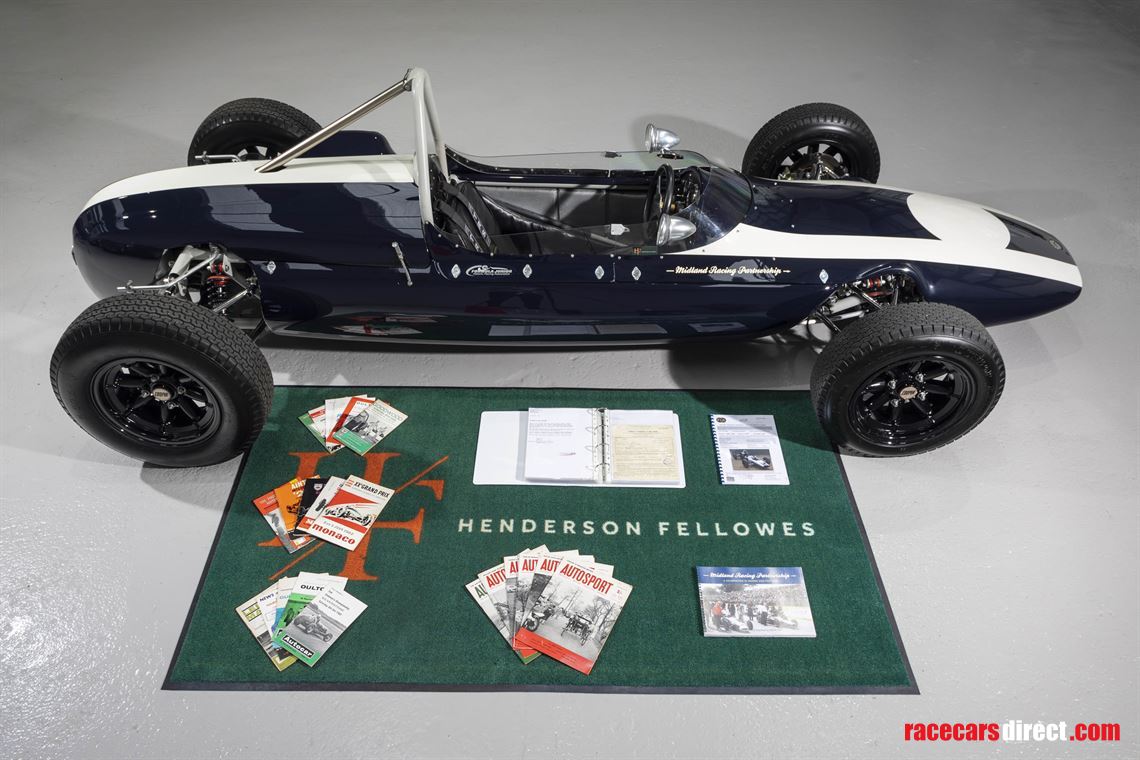 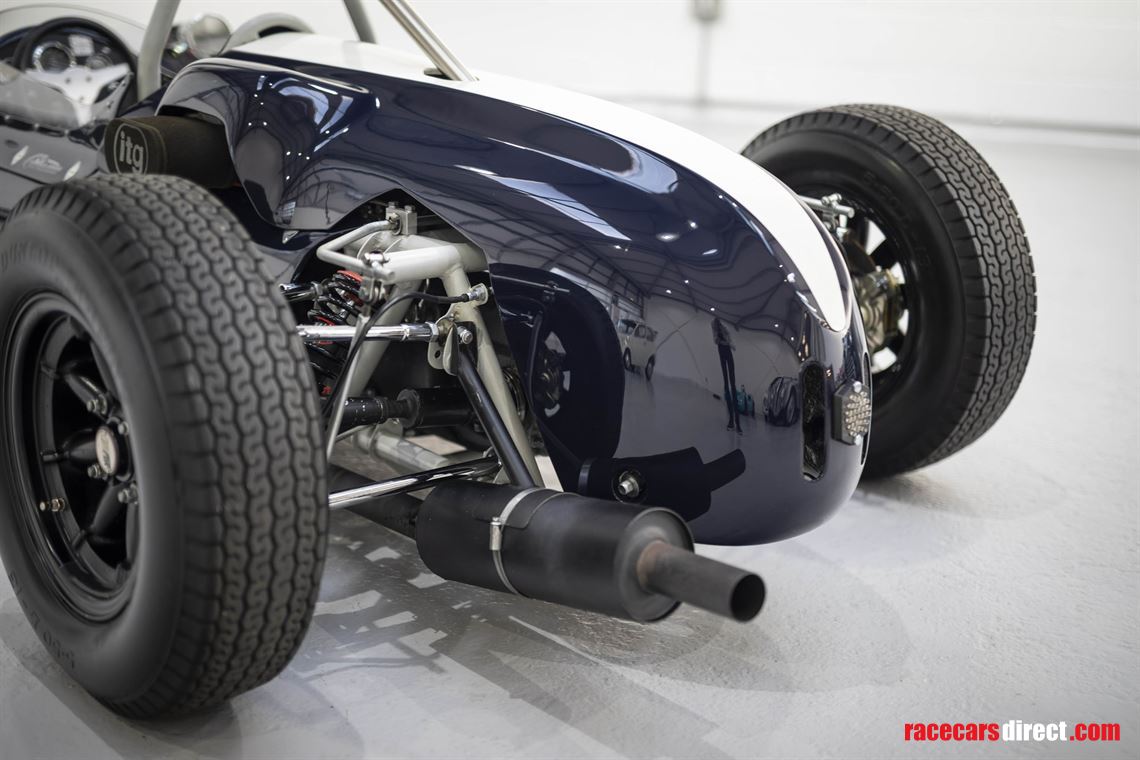 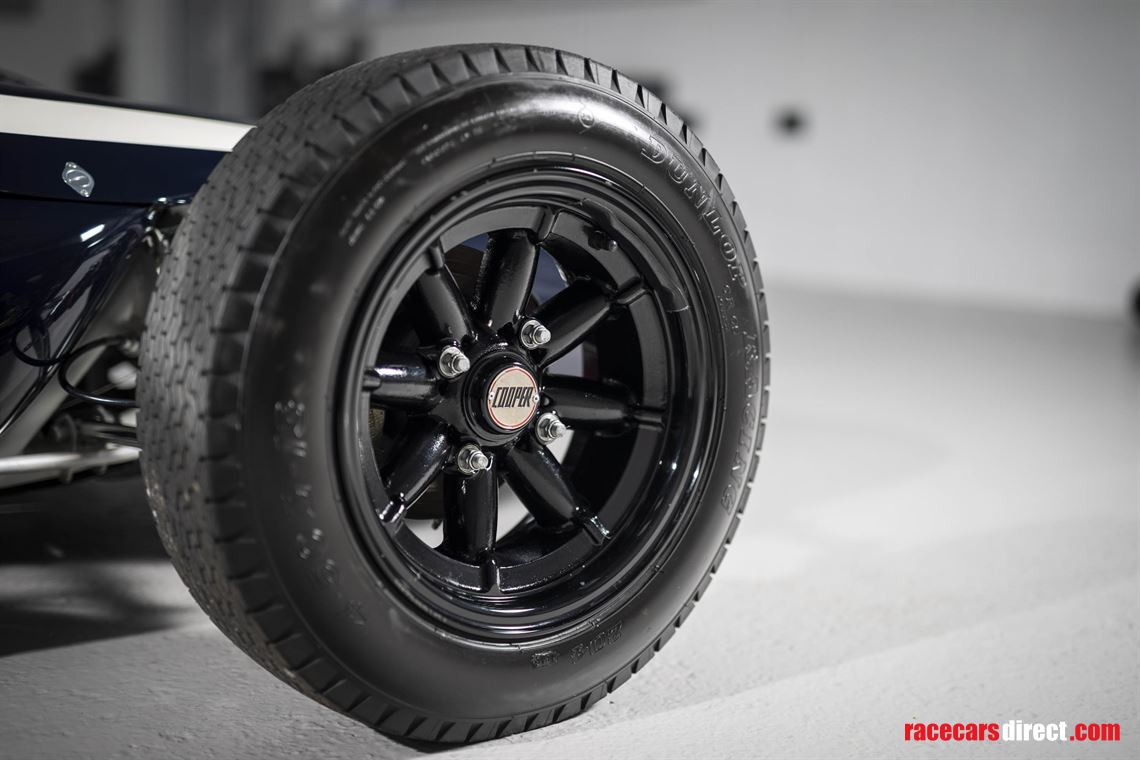 Chassis FJ/40/62 is one of two Cooper Formula Junior’s fielded by the Midland Racing Partnership for the 1962 season and campaigned by William (Bill) Bradley alongside British teammate, Richard Attwood. The duo proved to be extremely competitive with Bradley notching up several wins, numerous podium finishes and fastest laps throughout the ’62 season.

When the championship moved to Silverstone in March for the second round and the Commander Yorke Trophy, Bradley turned in an excellent performance with pole position and a second-place finish all whilst running a BMC engine. By the fifth round at Aintree, it was clear that the more competitive cars were running the Ford/Cosworth powerplant and so Chassis FJ/40/62 was duly fitted with a new engine. June saw the FJ grid move to Monaco for a non-championship round and to support the Grand Prix with the IV Grand Prix de Monaco – Formule Junior race. Unfortunately, Bradley became entangled in the early race melee that so often typifies racing at Monaco. This put him well down the order, but a determined drive saw him finish in a very credible 8th place and the first Midland Racing Partnership car home.

It wasn’t until Bradley arrived at Snetterton in mid-August for the Astley Trophy that the Solihull born driver could claim his first overall Formula Junior victory. Kirkistown beckoned next for Bradley with the Championship of Ireland on 25th August which Bradley dominated with pole position and overall victory after 30 laps, Hugh Dibley finished second with Attwood closing out the podium in third. Back in England for round seventeen of the championship at the Yorkshire circuit of Rufforth, Bradley claimed fastest lap and victory once again for the Midland Racing Partnership. The season was rounded off with races at Goodwood, Snetterton and Silverstone with a second, seventh and third place respectively.

On 26th October and 2nd November 1962, the Midland Racing Partnership advertised Bradley’s Cooper for sale in Autosport magazine (a copy remains with the car) as follows;

In December 1962 a Mr David Young of Timaru, New Zealand purchased the Cooper directly from the Midland Racing Partnership and imported the single seater to New Zealand as evidenced by the New Zealand Certificate of Registration of Motor Vehicle that can be found in the history file. Young then raced the Cooper at Pukekohe, Mount Maunganui, Levin, Renwick, Wigram, Ruapuna, Waimate and Teretonga before selling the FJ to Peter Gillum in February 1965.

In July 1967 ownership passed to Alan Burrows of Christchurch before he in turn sold to Vincent Williams also of Christchurch in 1978. The Cooper was then acquired by the Monoposto Trust based in Christchurch where the car would remain as an exhibit in its museum.

In 2014 the Formula Junior was acquired by a European enthusiast who repatriated the Cooper to the UK and entrusted Dave Abbott to carry out a complete frame-up restoration. At this time, Cooper single seater authority Peter Jackson inspected the T59 and opined that the Cooper was indeed the ex-Bill Bradley MRP car. Abbott commented that the Cooper retained many original parts and features as evidenced when they stripped the chassis back to bare metal. At this time, the owner decided to install a period correct BMC engine from Swiftune and an ERSA FJ 5 speed gearbox from Crosthwaite & Gardiner, thus running the Cooper to E2 specification. The restoration culminated in a very light car – running under the specified weight limit so lead weight has been added to the car which could be removed by the next owner to achieve a desired weight.

Chassis FJ/40/62 has since been raced in the FIA Lurani Trophy and the HSCC/FJHRA Silverline Historic Formula Junior championship up until 2020. With race preparation provided by Dave Abbott the Cooper is available with an in date Historic Technical Passport (HTP) and numerous spare parts.

The Cooper T59 is accompanied by a marvellous history file which not only contains it’s full race results from the ’62 season but original race programmes from each race along with copies of Autosport documenting each race report. A copy of the delightful notebook compiled by Derek Hill; ‘Midland Racing Partnership, A Celebration in Words and Pictures’ is also included.

This is a genuine opportunity to acquire a Cooper Formula Junior with a wonderful period race history that is not only race ready but competitively priced.

cost over £150k to build, driver has retired from racing hence reluctant sale.