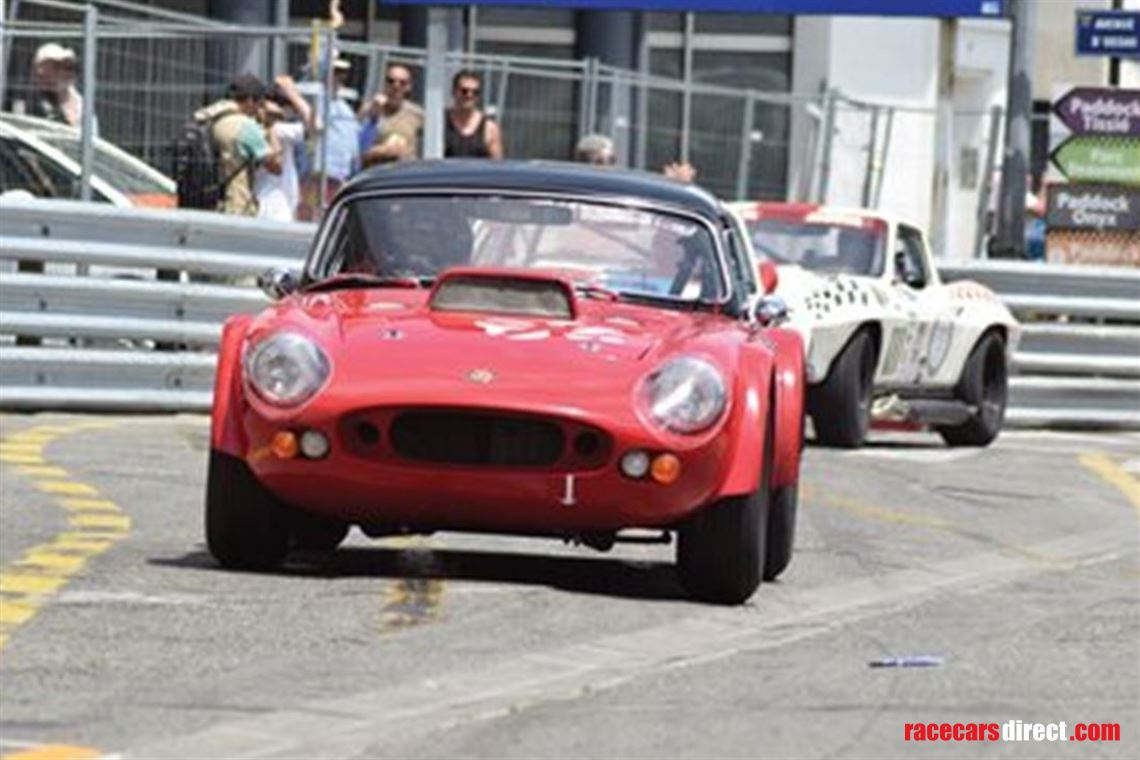 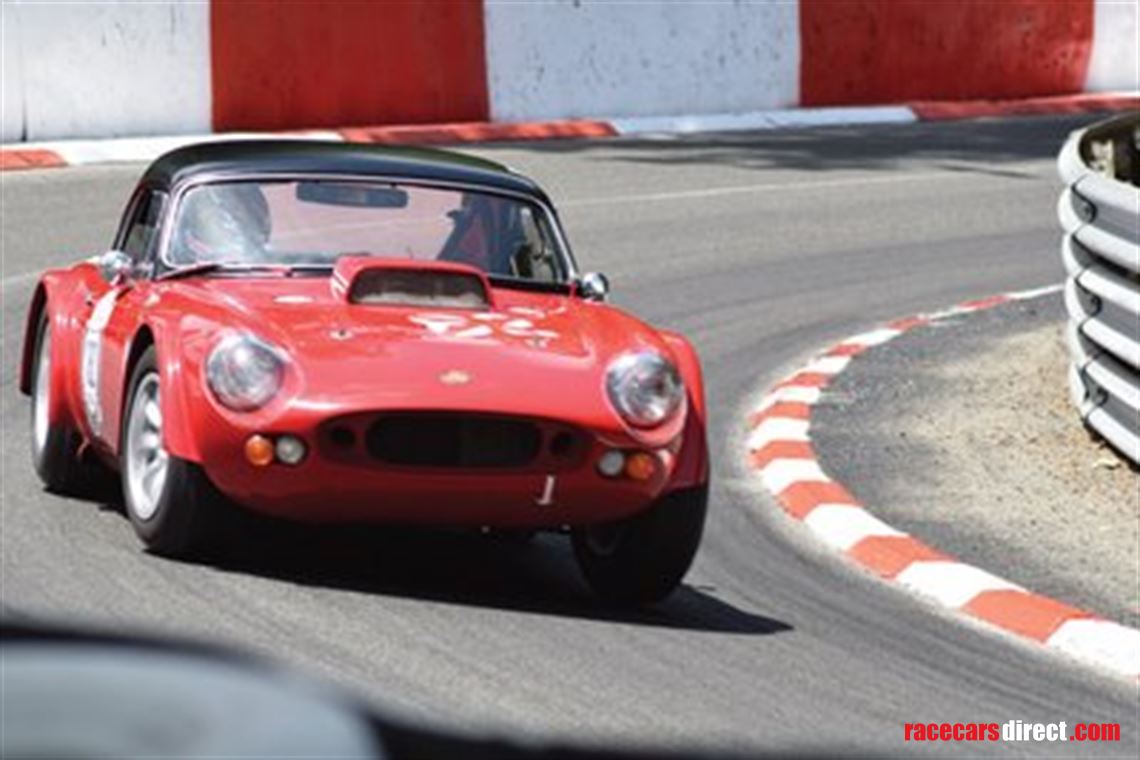 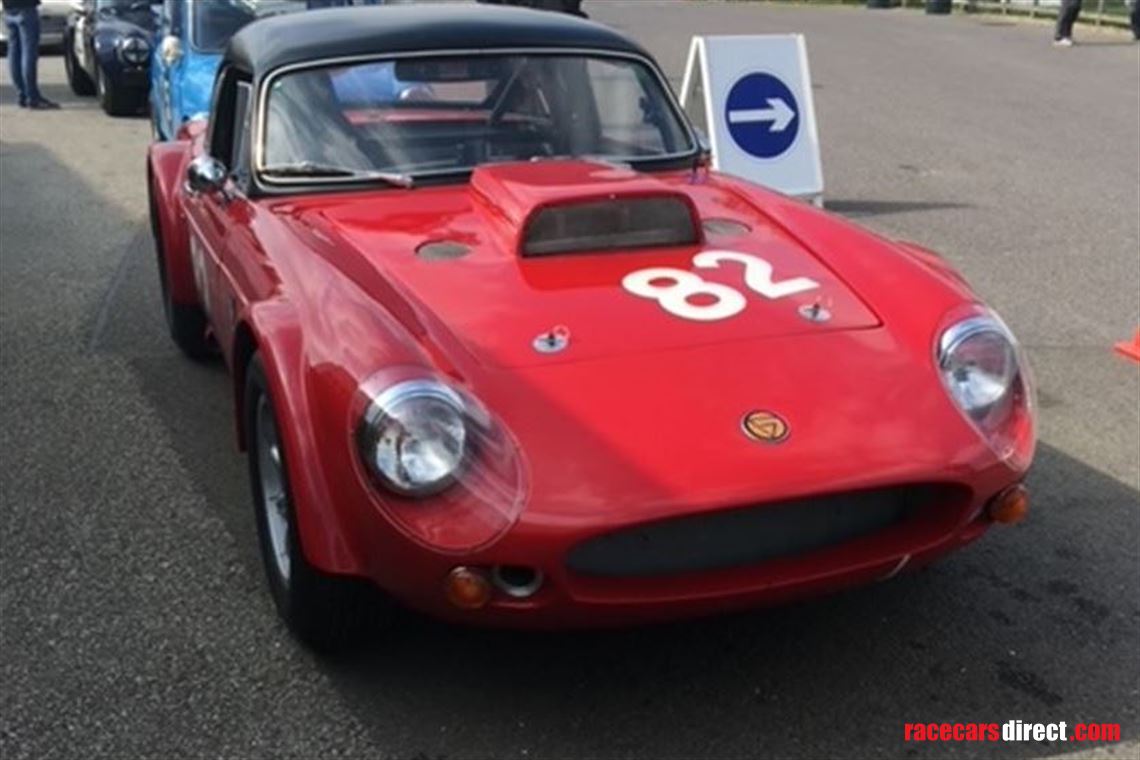 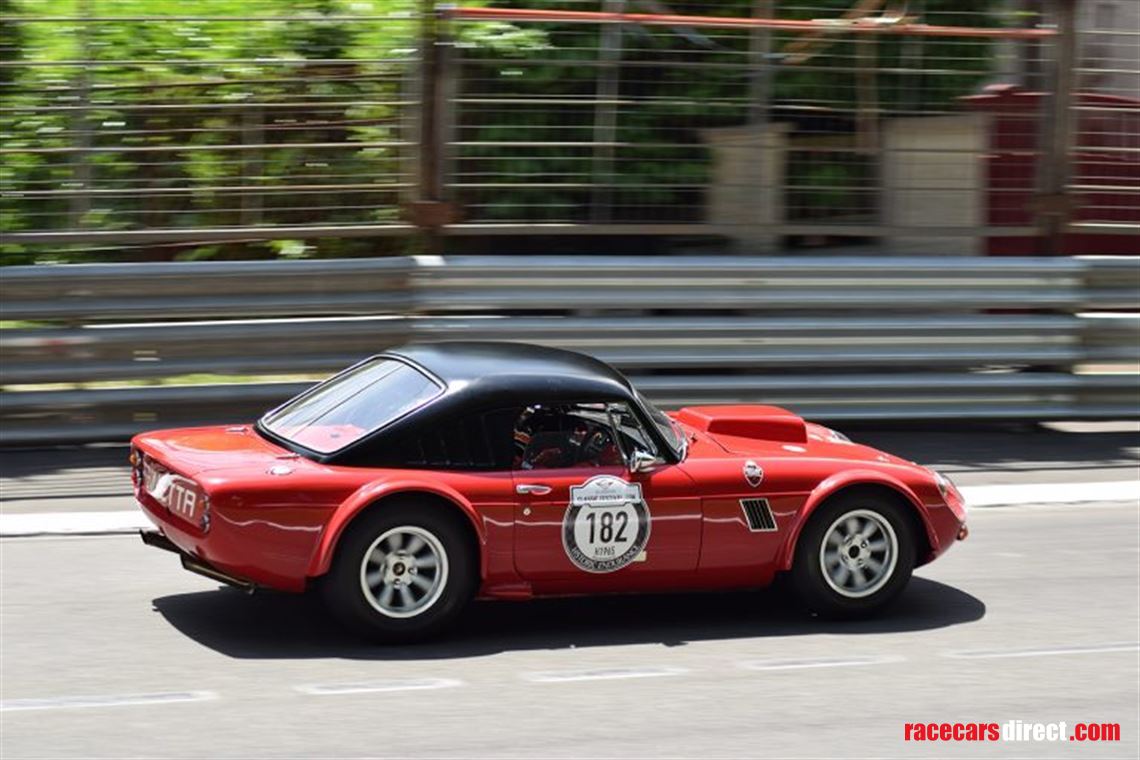 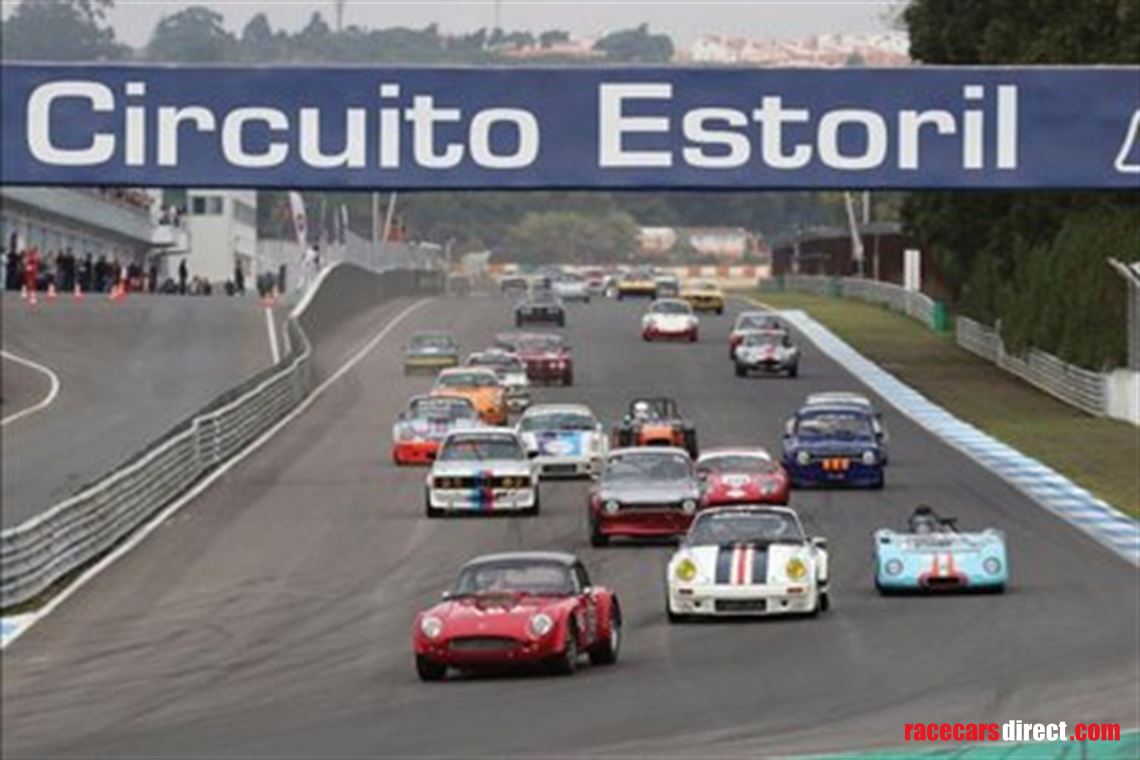 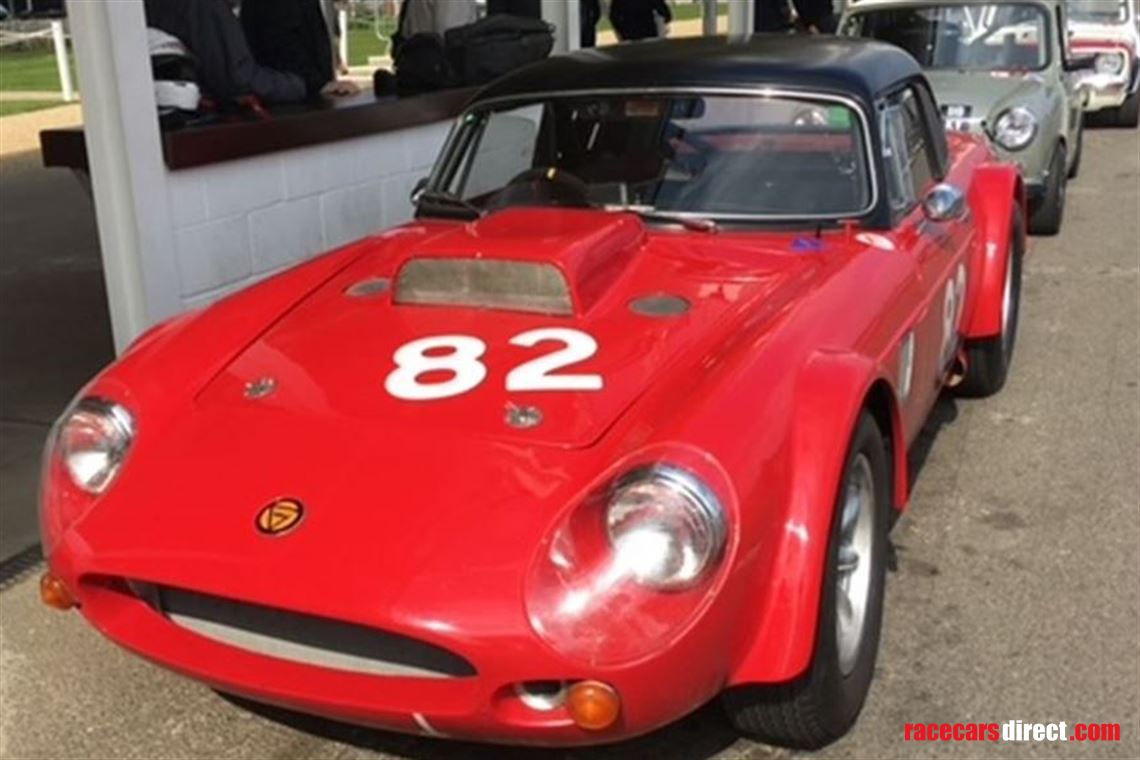 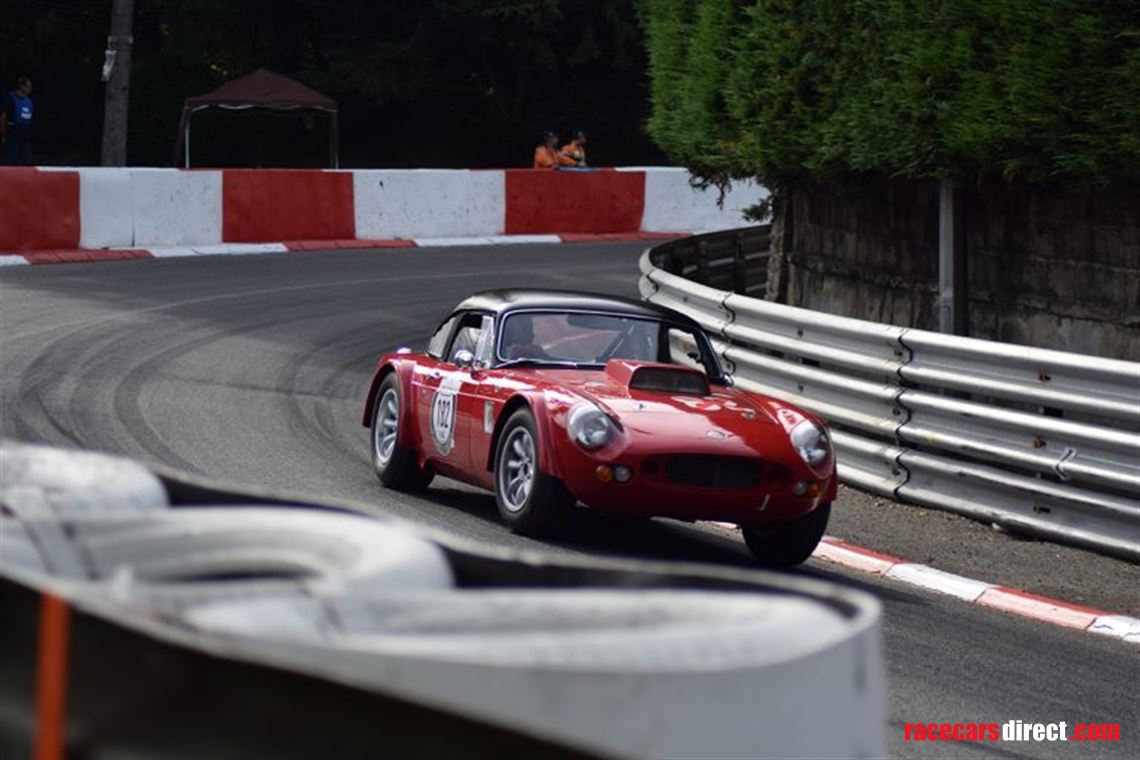 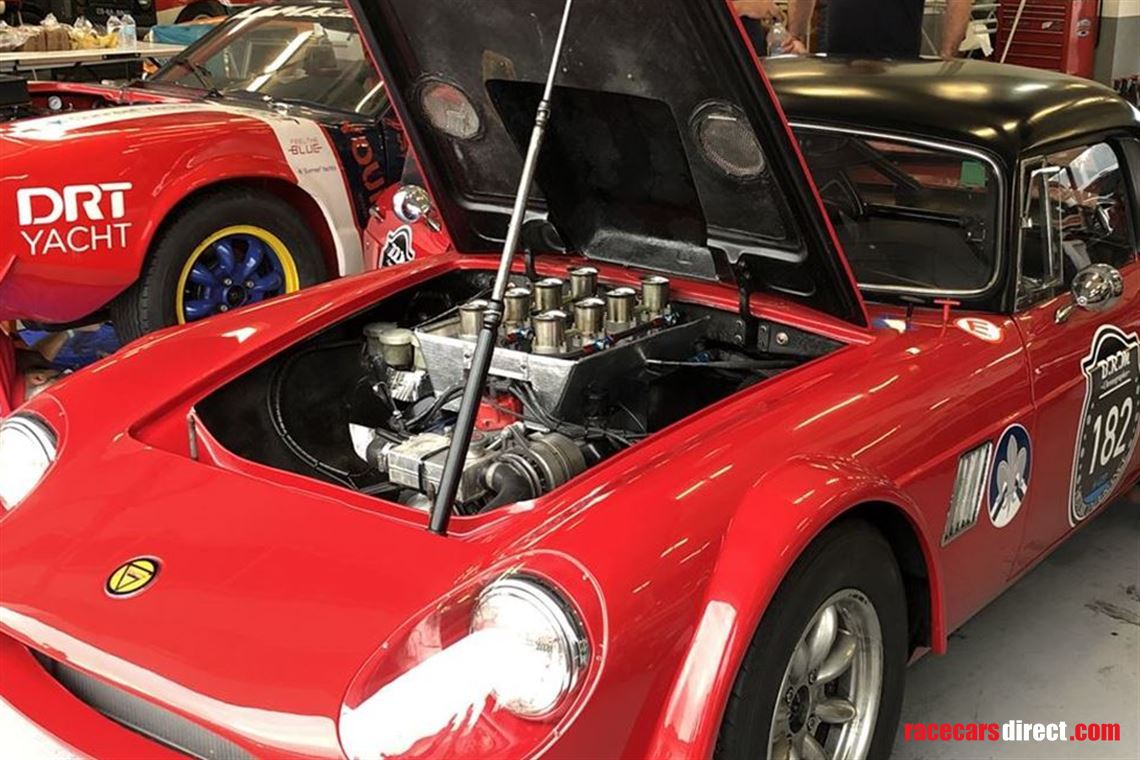 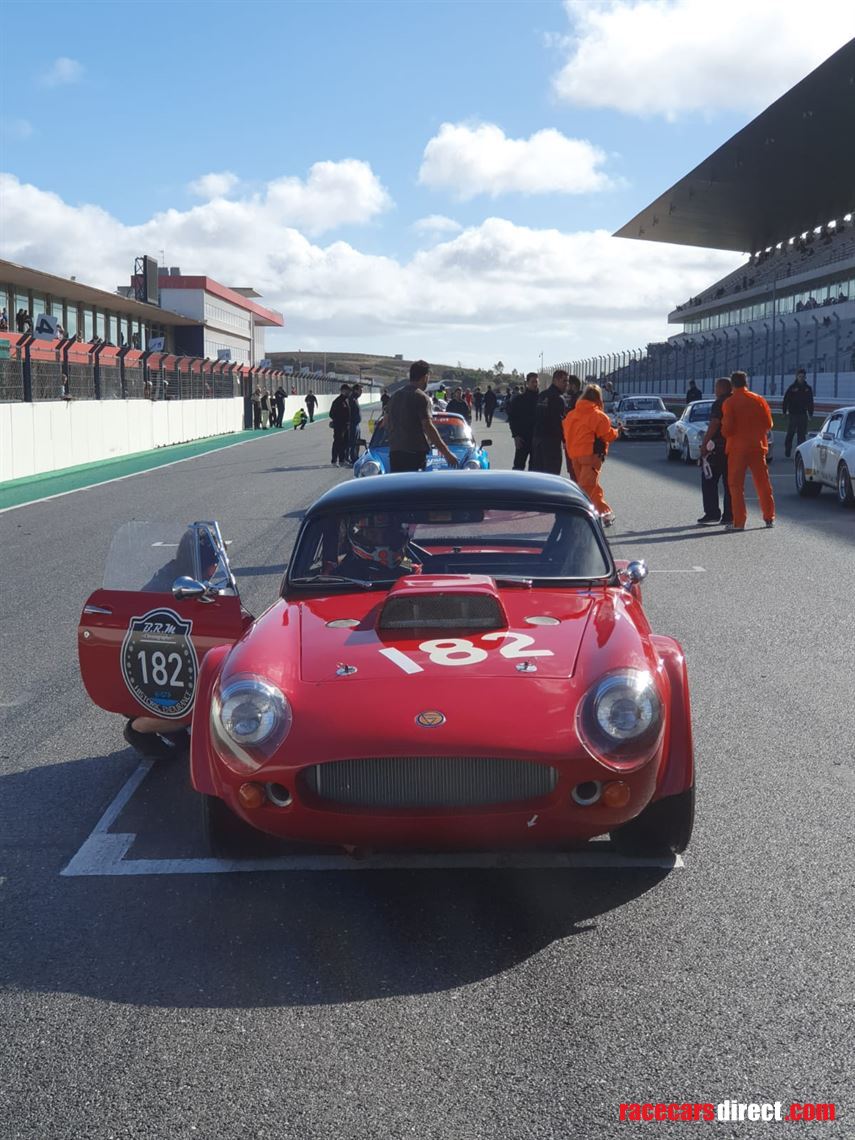 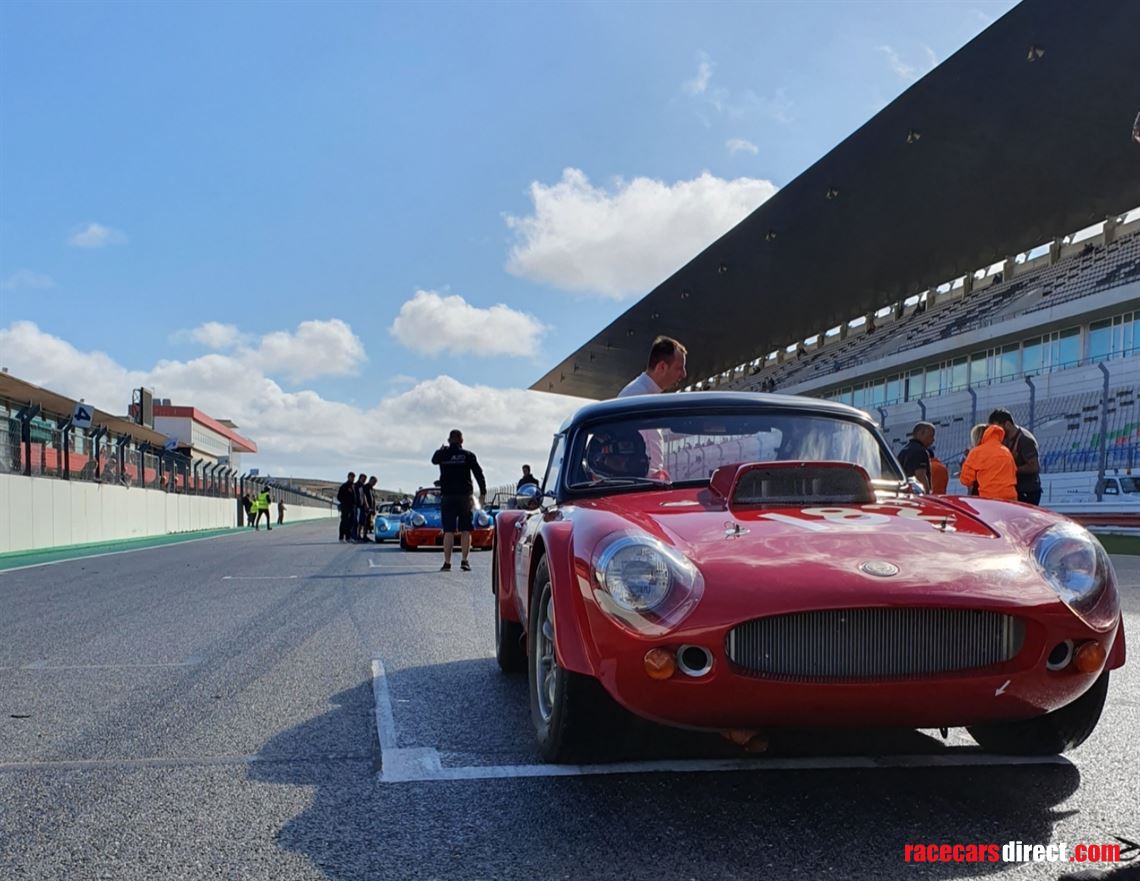 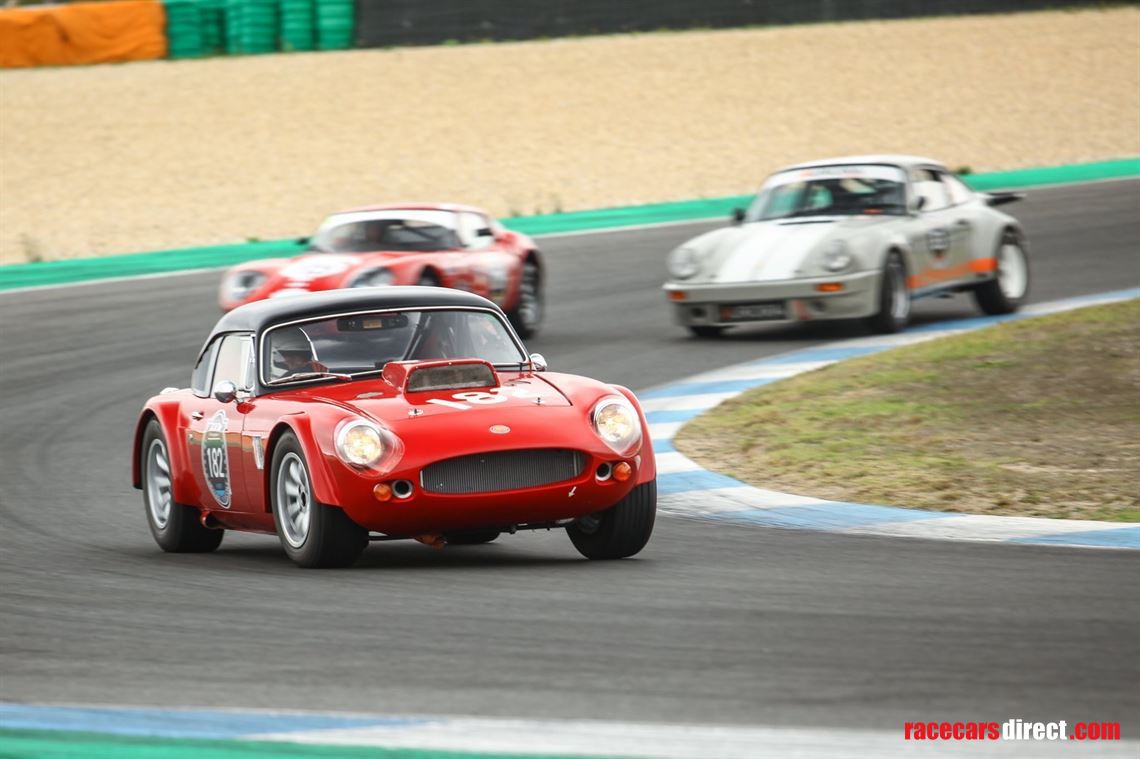 This remarkable, ex-works Ginetta-Ford G10 competition
coupé with American Ford V8 engine was built new in the
Autumn of 1965 and L driven by works driver Chris Meek L it
won its debut race that November in a race meeting at the
Brands Hatch circuit in Kent, England. Chris Meek started
that race from pole position and, after a race-long duel, won
from Robbie Gordon who was driving no less a car than the
ex-Dick Protheroe Jaguar -Type Low-Drag Coupé.
The Ginetta Cars company based in Witham, Essex was a
partnership between the four enthusiastic (and immensely
capable) Walklett brothers L Doug, Trevor, Ivor and Bob.
Their intention with this Anglo-American hybrid model,
powered by the Ford Mustang 289ci (4.7-litre) V8 engine, had
been to achieve the homologation which would permit it to
compete in the appropriate United States road racing series
However, denied homologation, the G10 would have
been forced to compete against McLaren and Lola sports-prototype cars of much greater performance potential. Consequently, the majority of American orders for the cars were cancelled and ultimately only three G10s were produced. It was, however, a good looking design and it was
then adapted by conversion into the Ginetta G11 model, fitted with MGB 1800 4-cylinder engines and modified MGB rear
suspension. Problems persisted, however, not least with
delivery of the MG components and the Walklett brothers
eventually shelved G10/G11 manufacture, leaving surviving
examples as rare birds indeed.
This particular ex-works racing version was most prominently featured in the August 2011 issue of Motor Sport magazine being track tested by former driver Chris Meek at the Mallory Park circuit which the Leeds-based property magnate ran for several years before selling it to the BARC. As restored and prepared for the present vendor by respected specialists Geiscoe Motorsport, this Ginetta G10 sparked vivid memories for Mr Meek as he recalled: 'The
Walkett brothers created the G10 to prove to the press that Ginetta could build a real car as opposed to a kit car, while at the same time hoping to have success with it in Amenca. Their problem was money building this car used every penny they could muster.
Designer Ivor Walklett himself recounted how: 'The race car
was not drastically different from the road car, but we fitted
variant of our 7-inch magnesium F3 wheels, shod with F1
tyres. The engine was the 4.7-litre 271 horsepower Ford
Mustang imported from the USA. We adapted it to 350hp with the Ford kit from Ford Advanced Vehicles in Slough, where the GT40s were built, with four twin-choke downdraft
carburettors, a decent manifold, hotter camshafts and
stronger con-rod bolts. Weighing around 900kg (the G10)
should have been very quick... we easily topped 150mph on
the Witham bypass. After testing at Brands Hatch we lowered the axe ratio, which helped acceleration and braking, so come race day we were fair confident of a good result Chris Meek had never even sat in the G10 before he drove it at Brands Hatch. But as he recalled: When I raced. It was simply unbeatable...it was remarkable. Fine-tuned, this carwould have beaten anything in its class. However, after its outright win Ginetta felt they had proved a point and reverted back to the G4 and G12. I only raced the G10 that once."
Asked after his recent Mallory Park laps in the G10 if this car
felt like it had back in 1965, Mr Meek declared: 'Absolutely.
But better. It's sharper, it's a beautiful car to drive. You can
take most of this circuit flat in top, just lift for the bump... it has incredible torque. Fantastic grip and handing. This is now really refined car, and beautifully balanced.... Even though it's a relatively short wheelbase, it was not the least bit twitchy...
Of course for British circuits a short-wheelbase car is ideal.
As writer Ivan Ostroff concluded in the Motor Sport G10 story:
'Had the Walkletts' plans for its throaty new cortender worked out, Ginetta might have become a by-word for muscular big. banger racers. But the company's real expertise lay with small, light and lithe machines, and as the G12 continued the G4's run of unlikely success, the prospects of new transatlantic markets seemed not only further off but less and less important. The hunky G10 and its more practical G11 spin-off faded from view, leaving the memory of one scarlet and black rocketship talking one dramatic victory that would never be followed up.
The car arrived at Gelscoe Motorsport Ltd directly from the
USA. It was inspected prior and found to be in need of a full
restoration. The original chassis and body were still with the
car but both were in need of work. The body was removed
from the chassis and stripped of its paint, revealing the
original paintwork beneath the many subsequent layers, while the chassis was blasted, repaired and retumed to its correct fitted to a top-loader gearbox, via which power is transmitted to an -Type differential unit. Koni-type dampers were fitted all round
The Ginetta was tested at Silverstone by Andy Newall in the
late summer of 2011 and then raced by him at Australia's
Phillip Island in March 2012. Andy finished second in all his
races, up against slick-shod Porsches. The following
weekend the Ginetta participated in the demonstration laps at the Australian Grand Prix. At the Goodwood Revival in 2012,
Andy and the Ginetta led on all laps but on last lap a hub
broke, forcing their retirement.
We are delighted to offer this remarkable L and now most
notable
- Anglo-American V8 racing Ginetta - all dressed-up
and ready to shine in a new owner's capable hands within the appropriate class of Historic competition.

Including Euro Containers & Side Tables.

This car competed all rounds of the 2013 World Championship.

Fully rebuilt, prepared and maintained by Laranca Motorsport since 2018 for current owner

Draws on runners, with storage shelves and removable front cover.