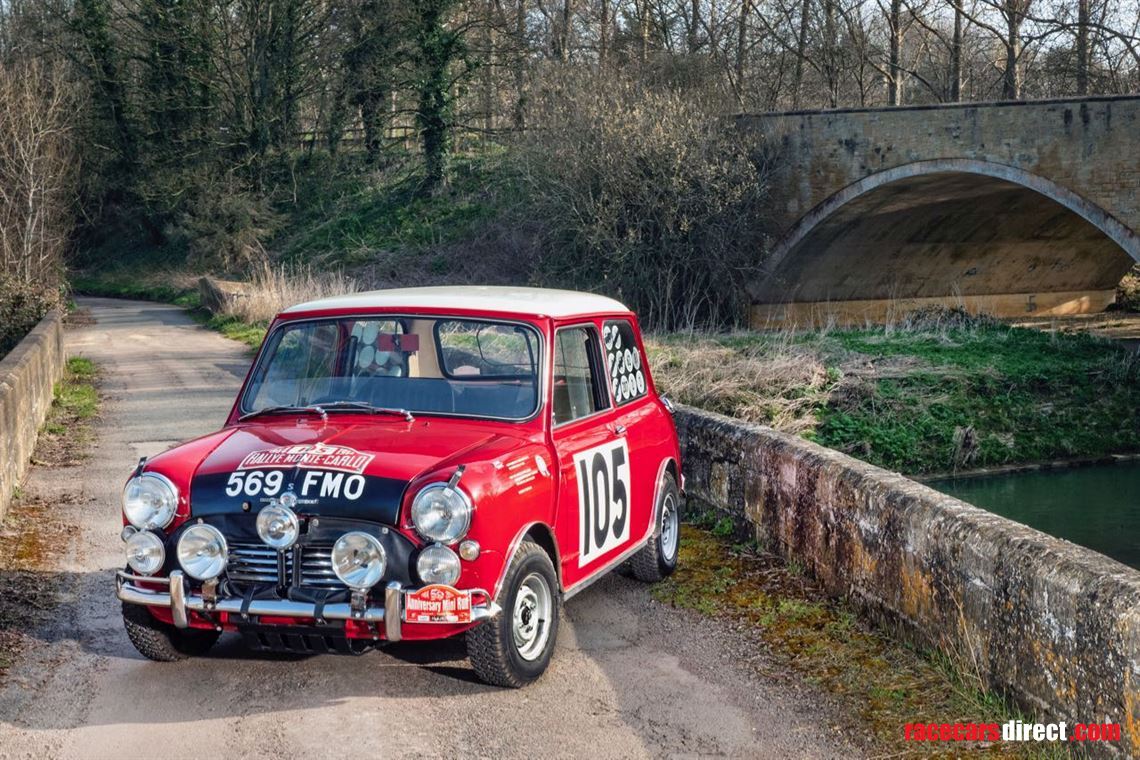 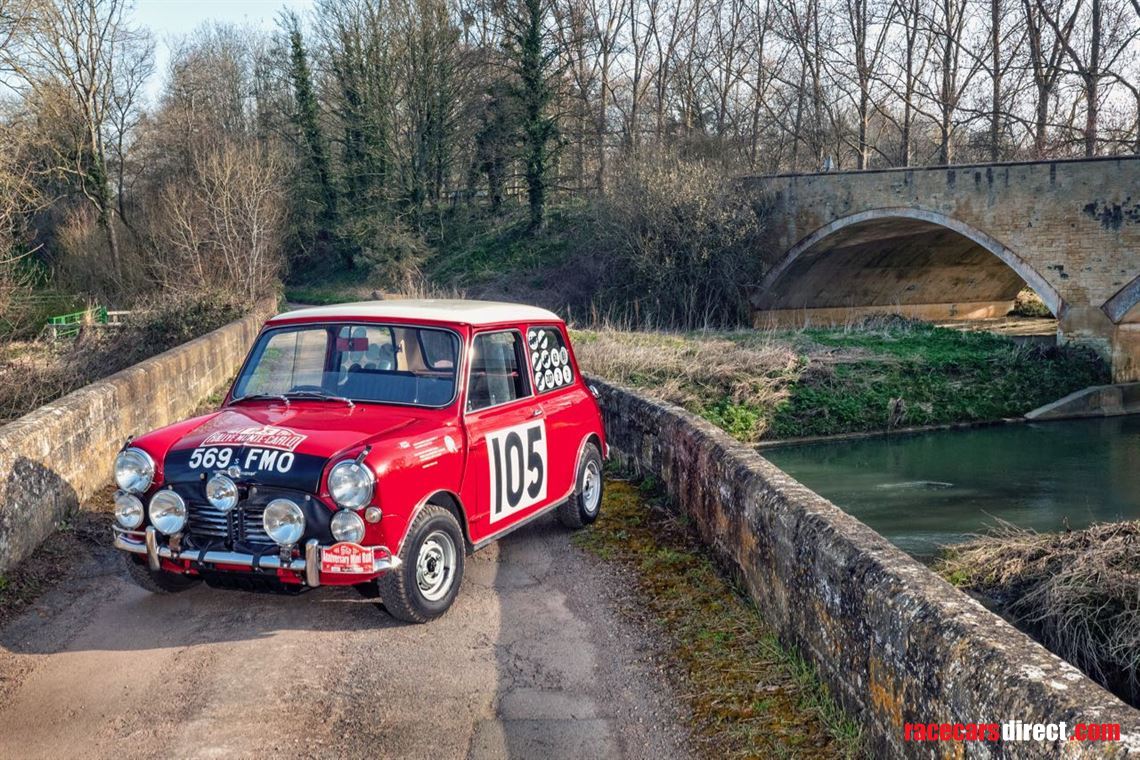 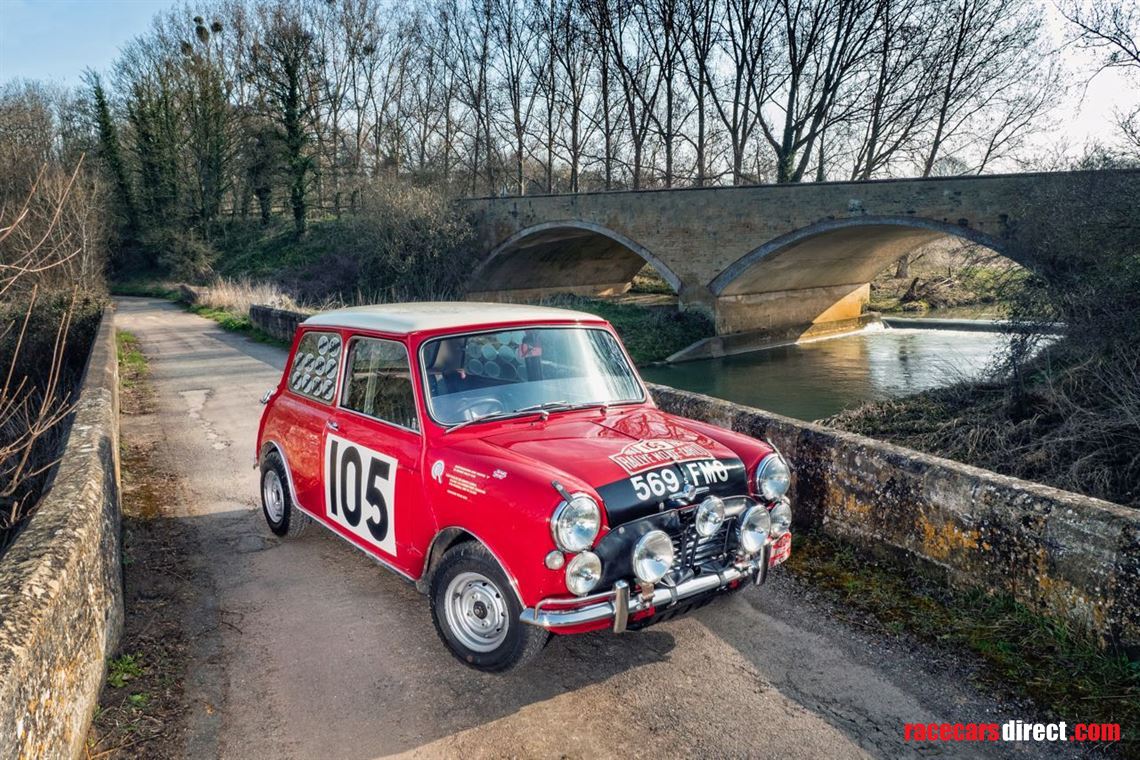 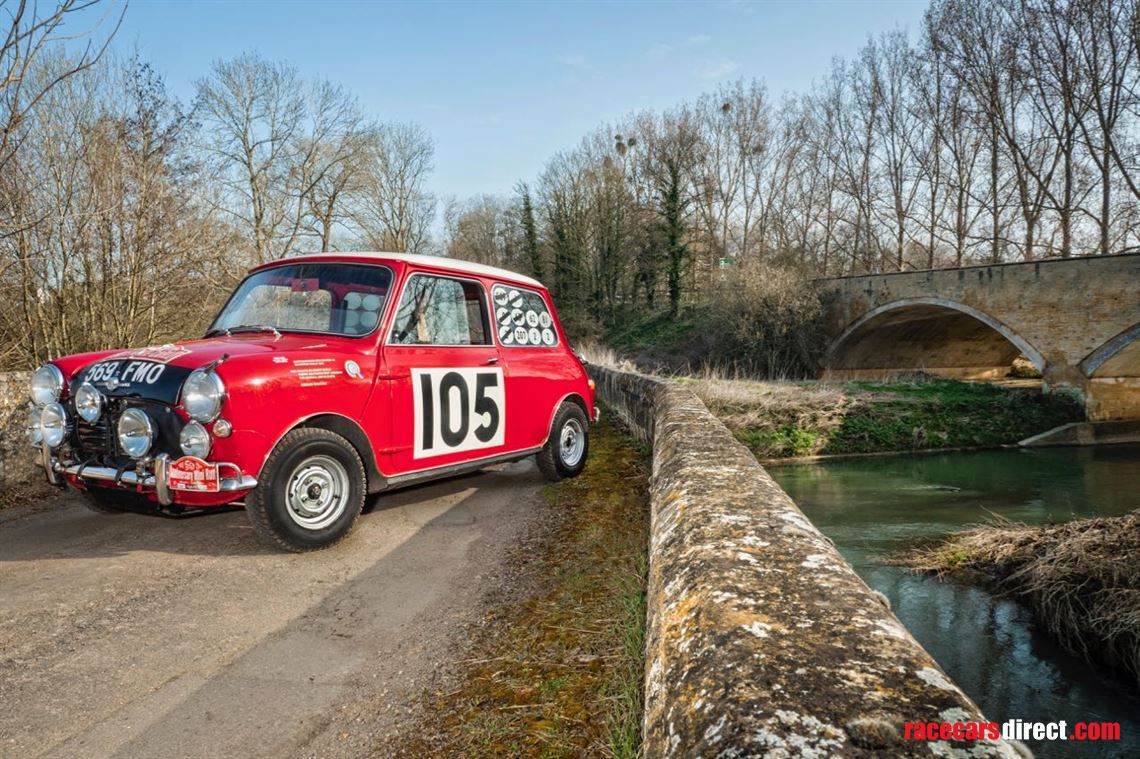 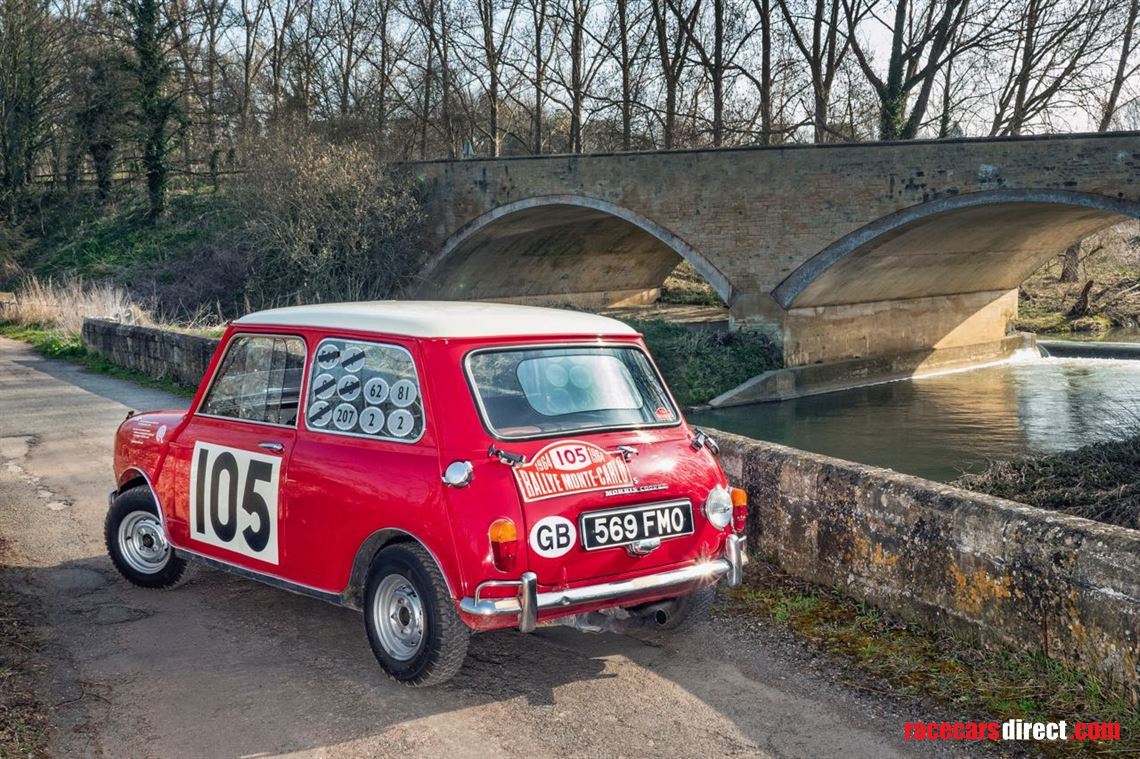 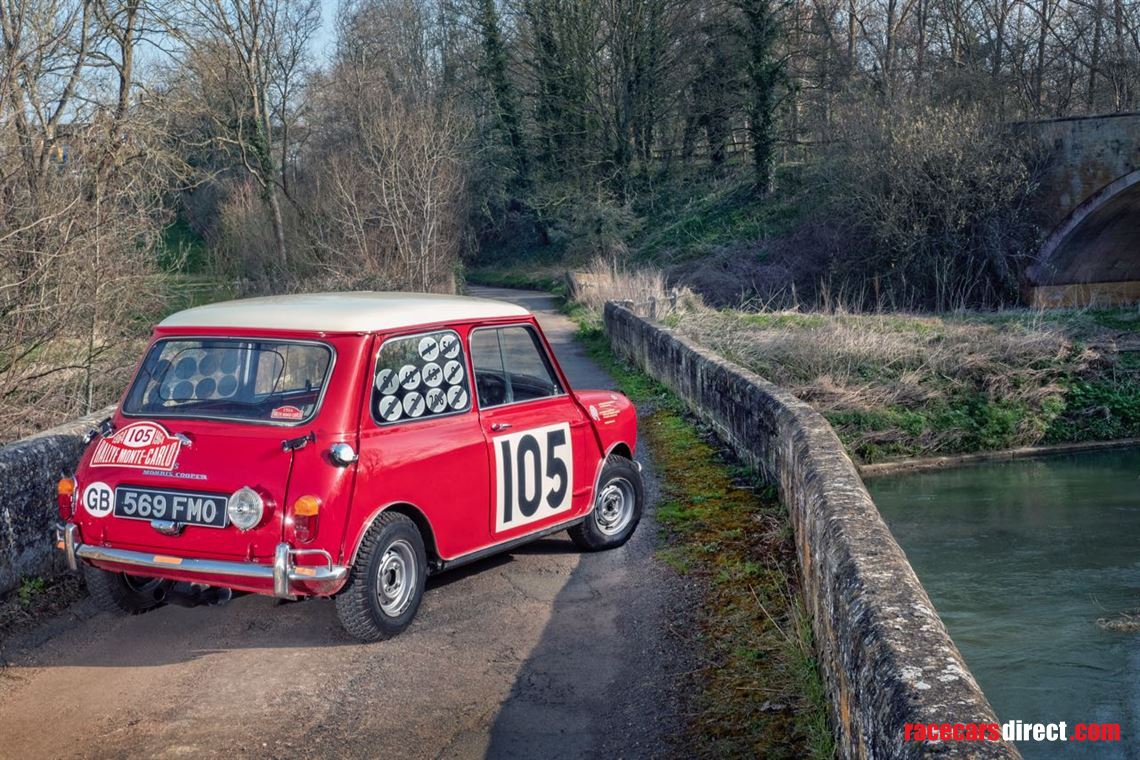 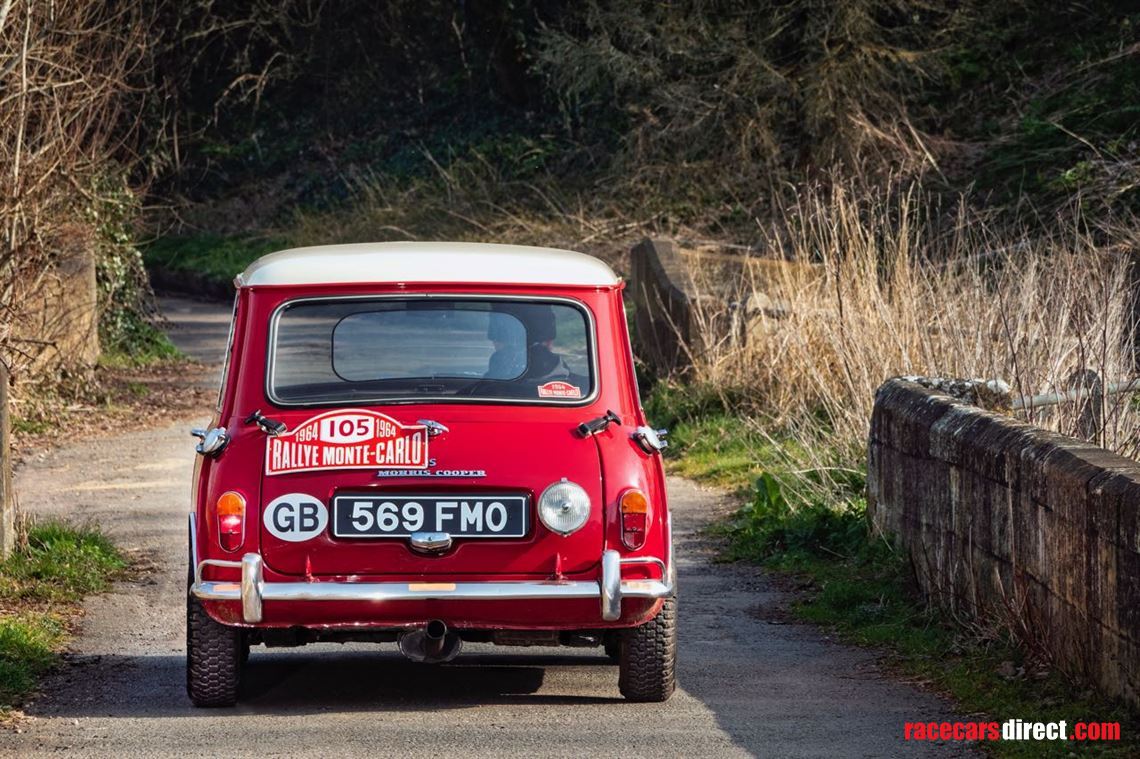 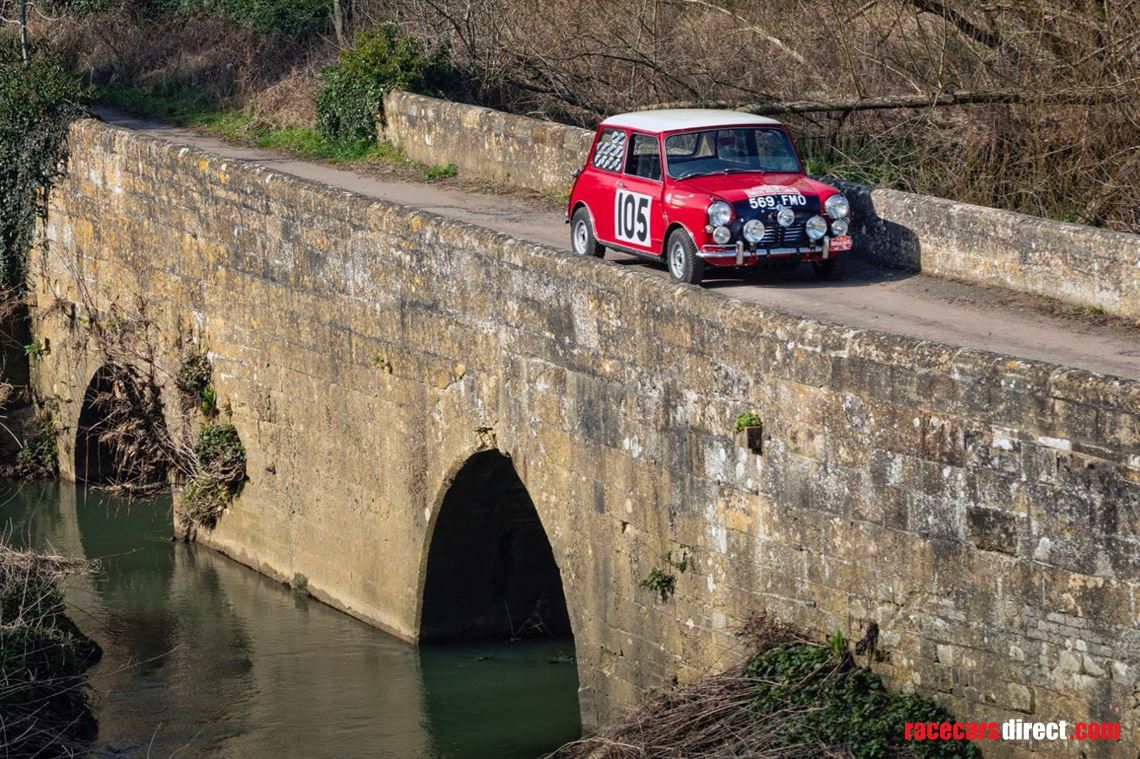 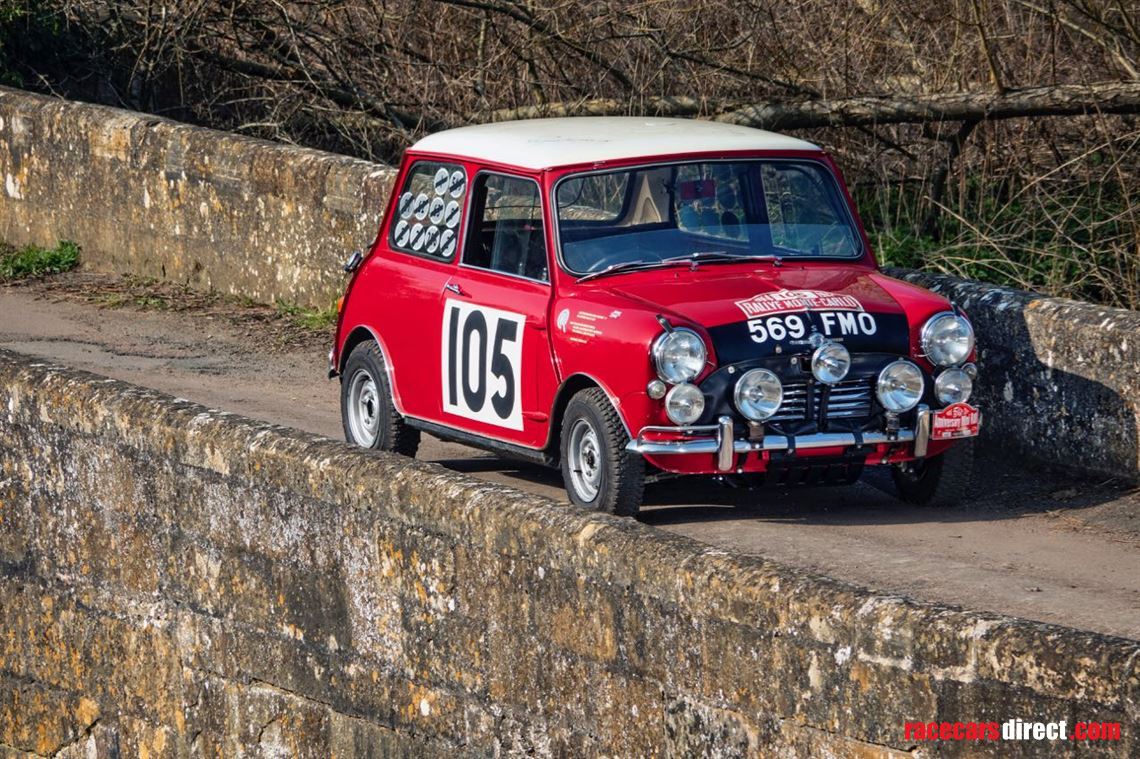 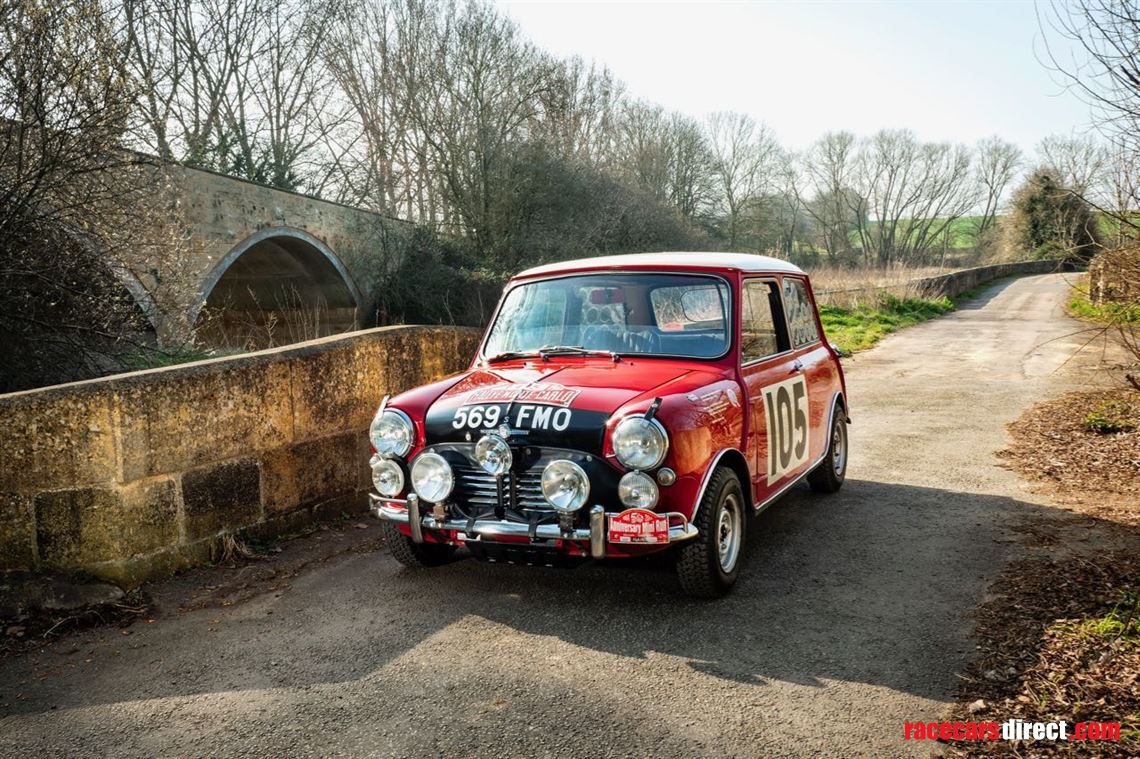 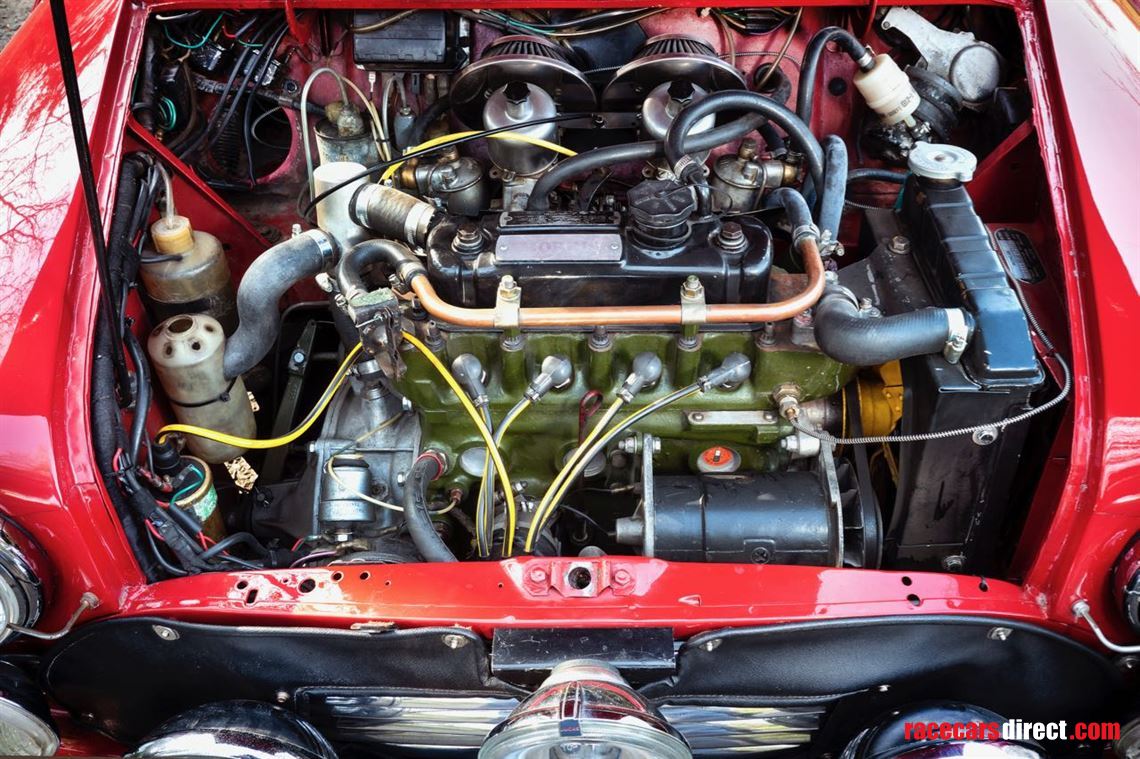 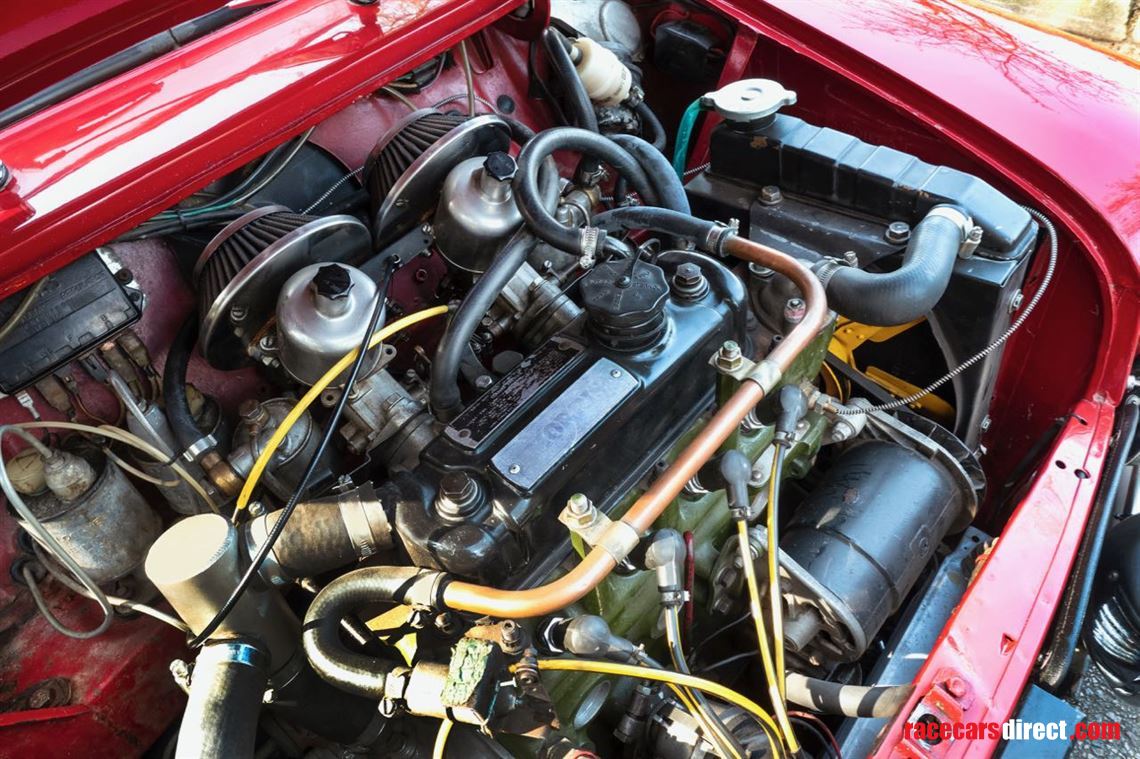 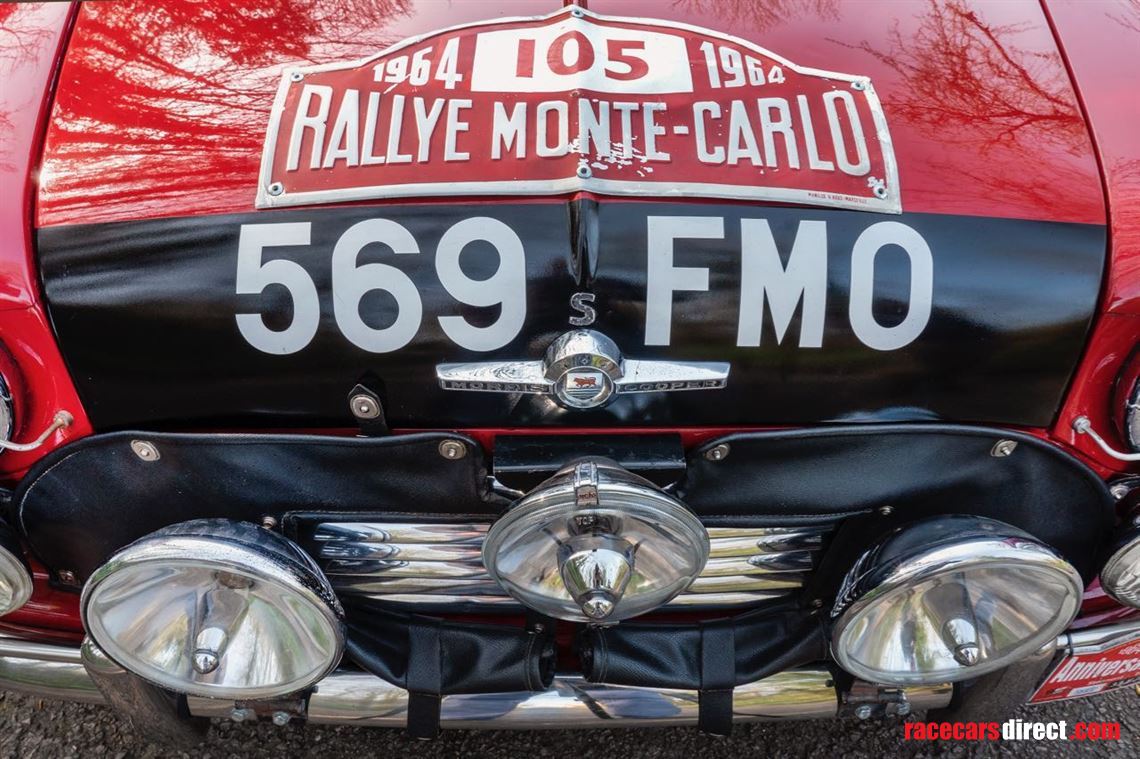 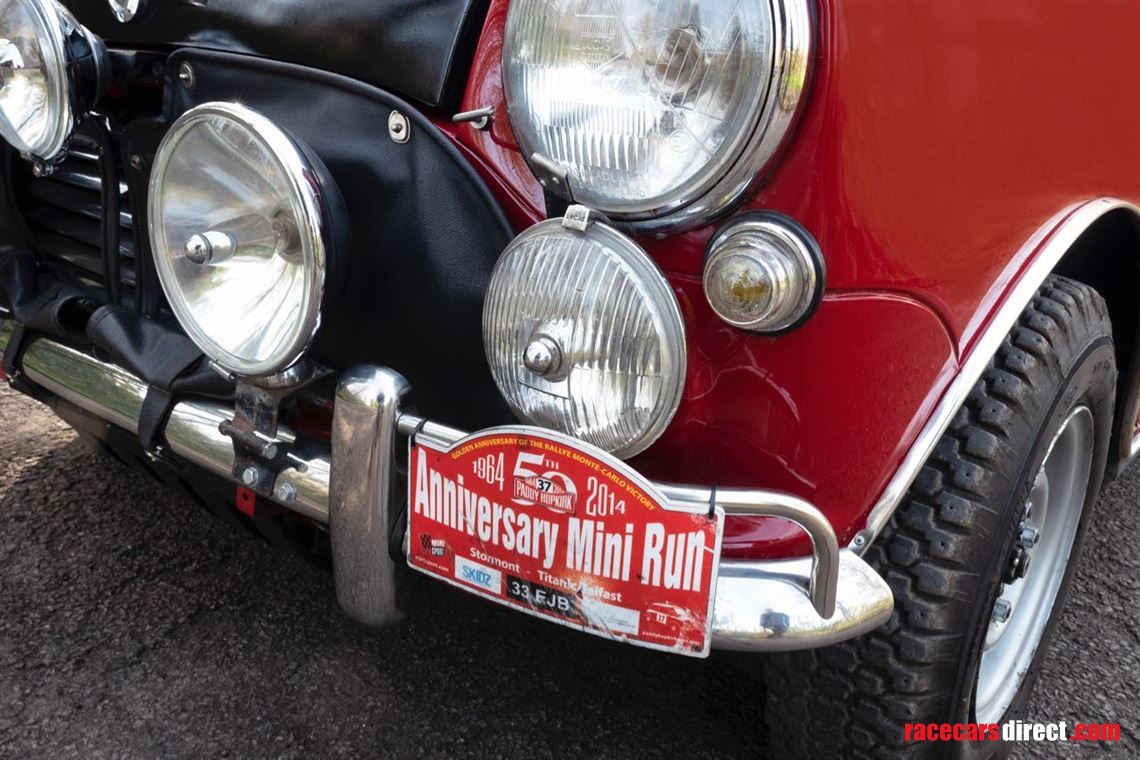 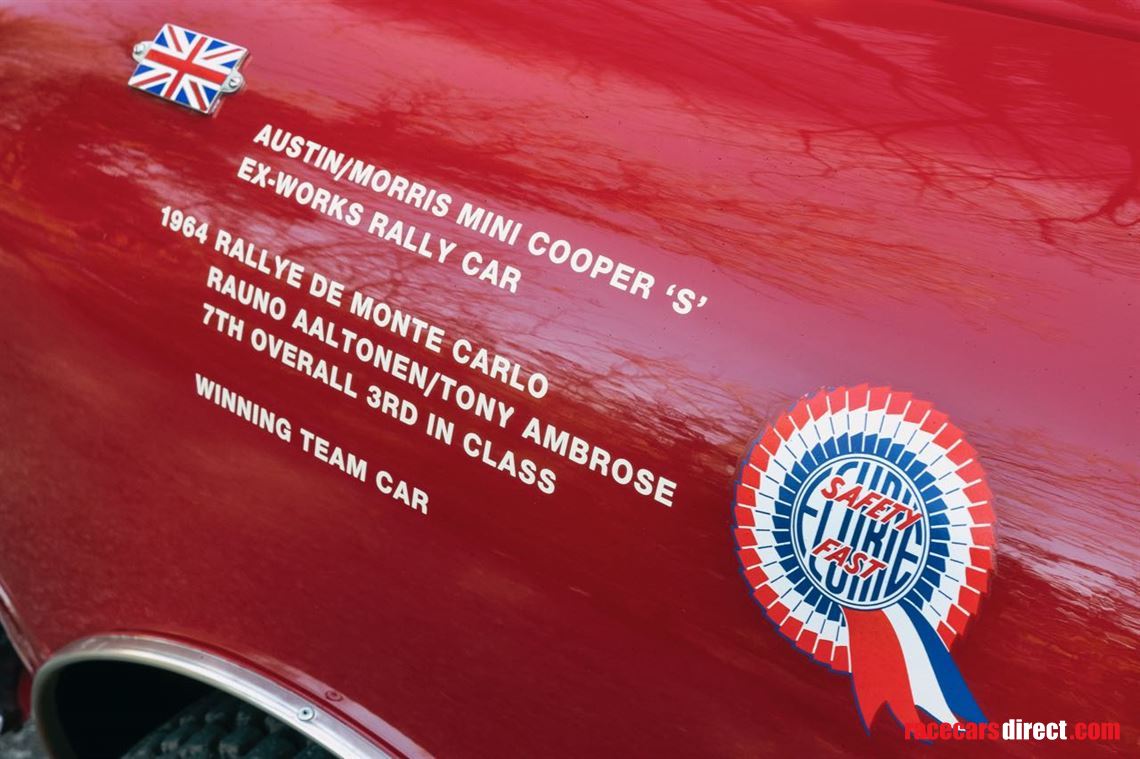 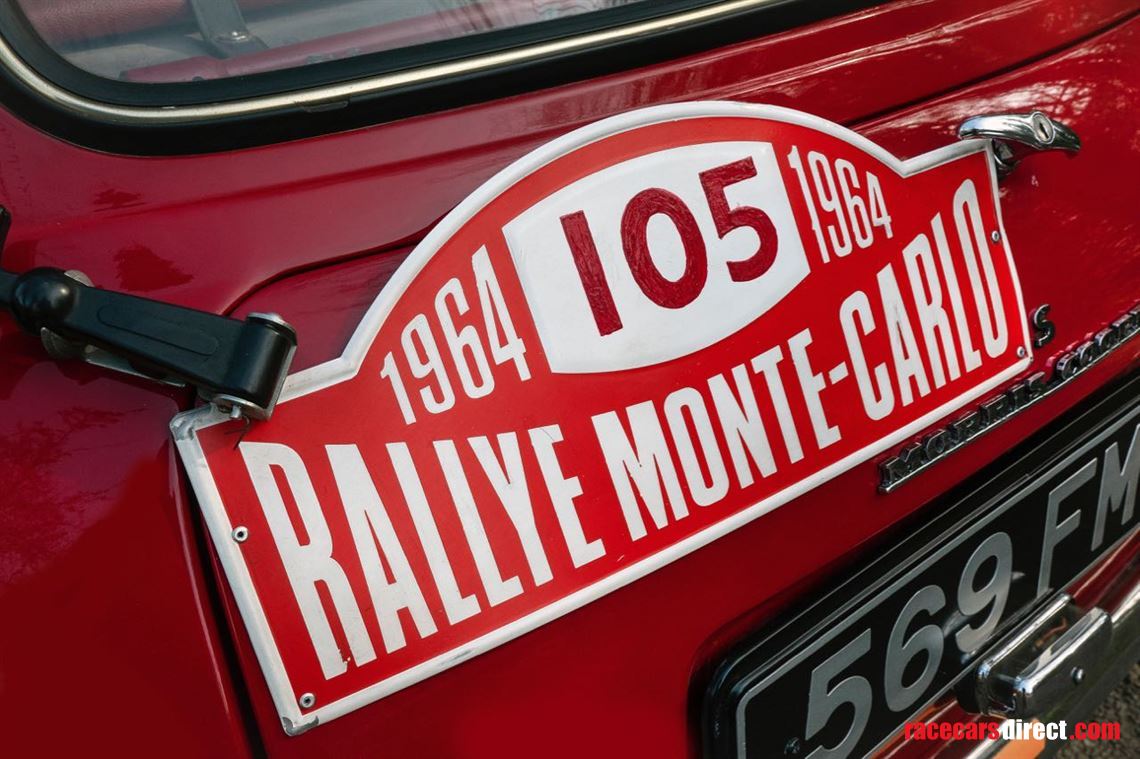 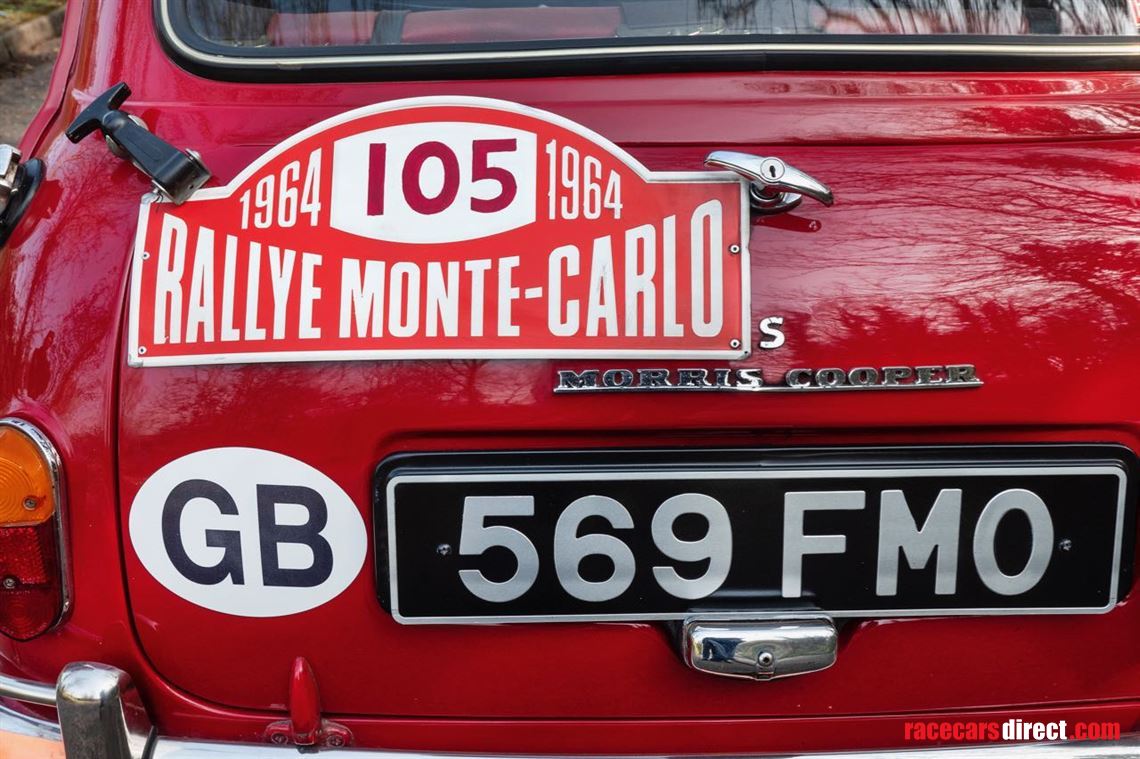 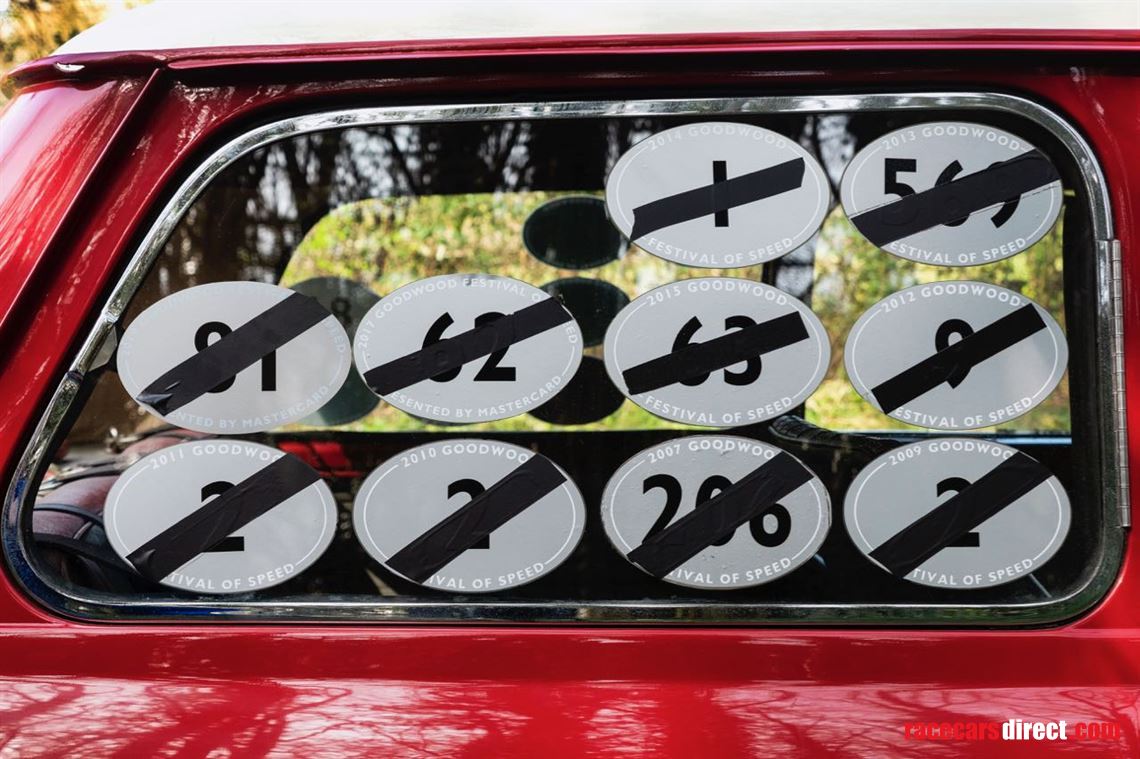 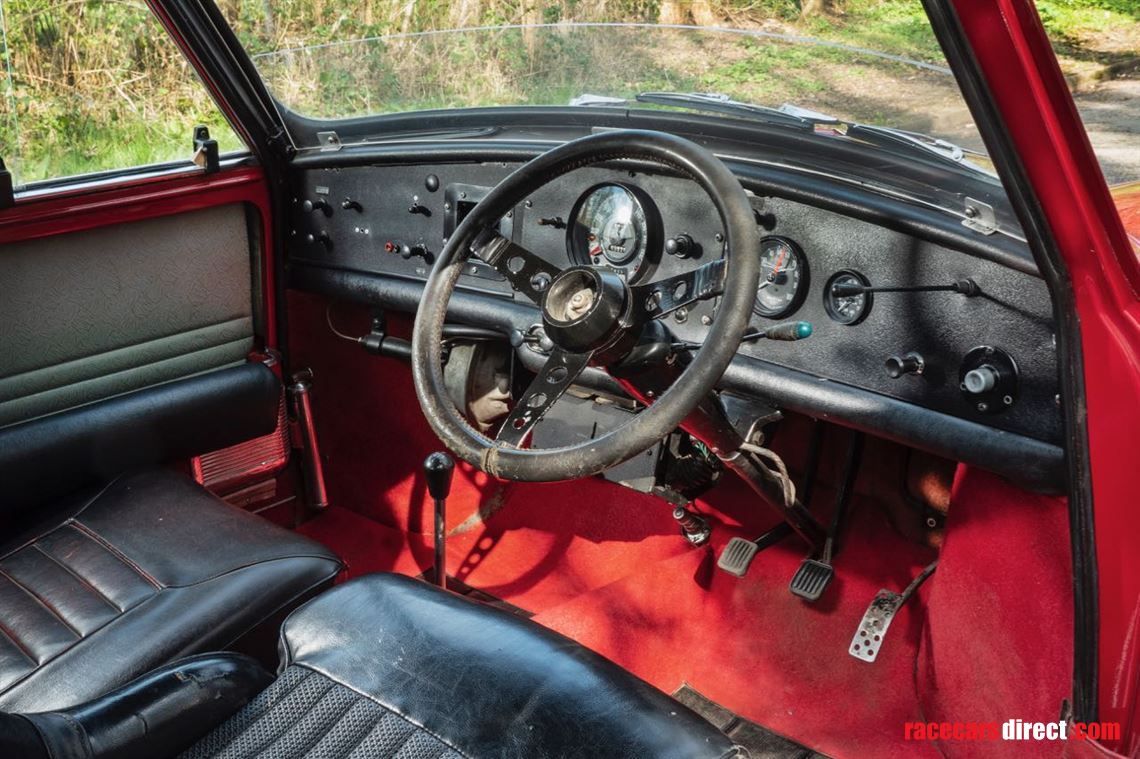 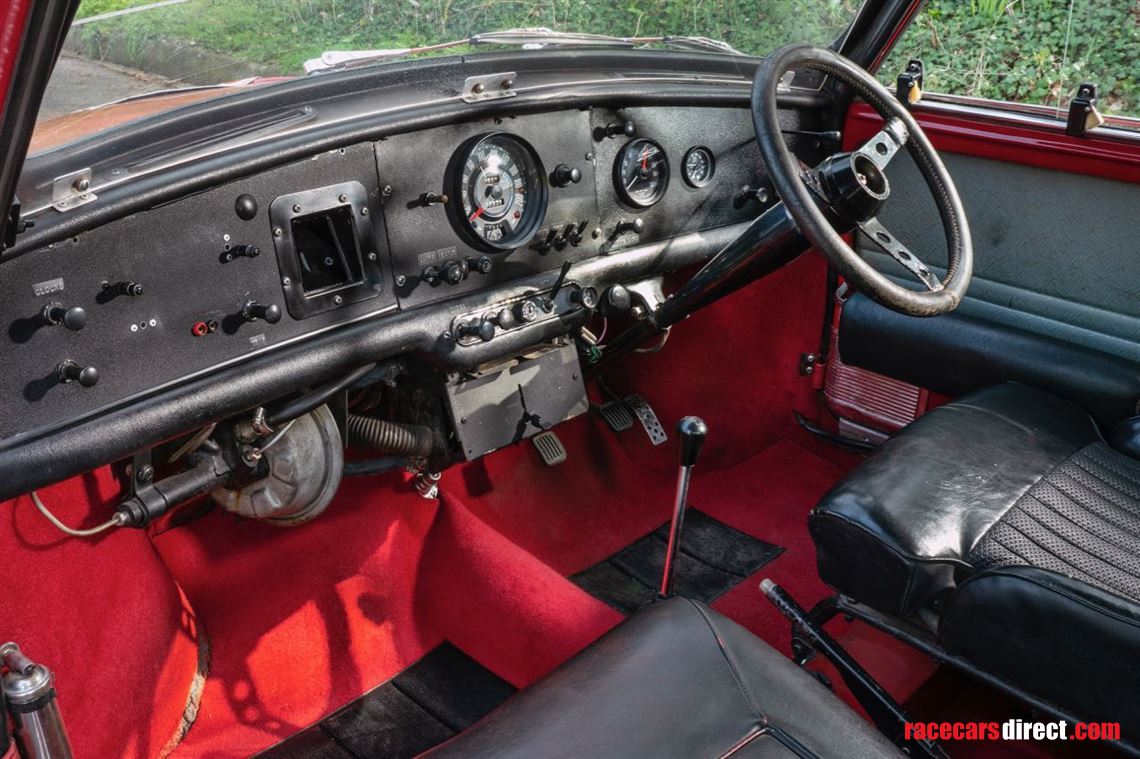 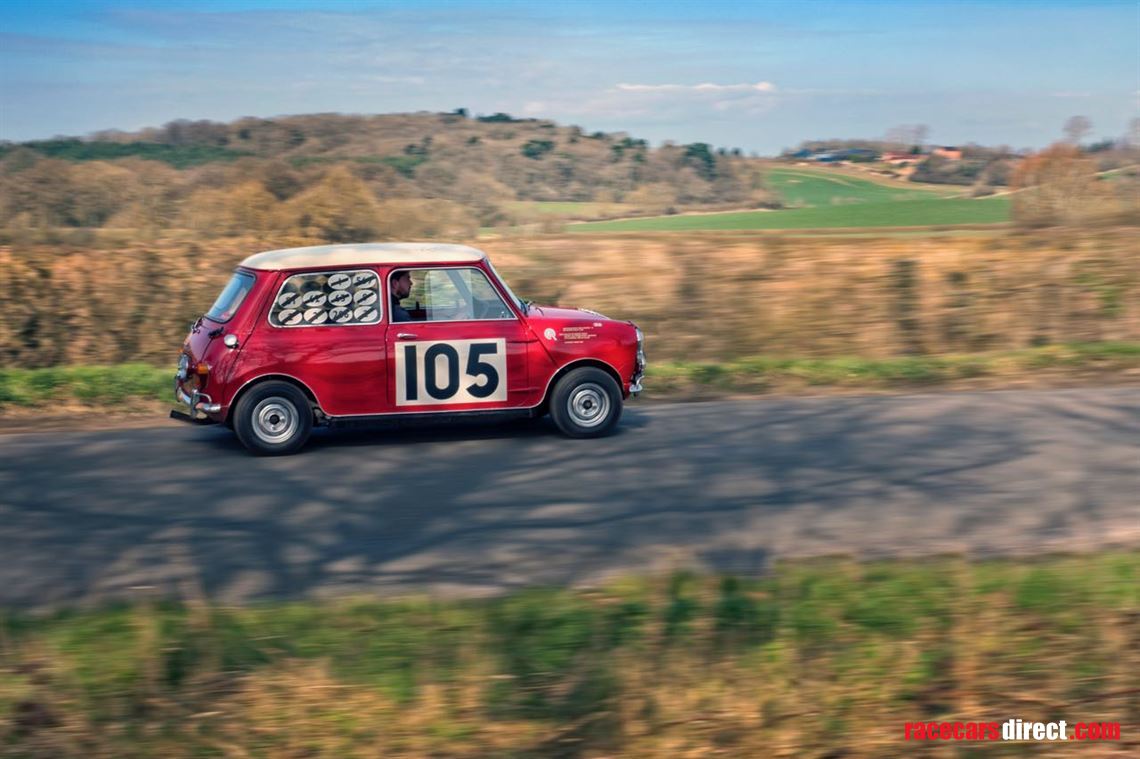 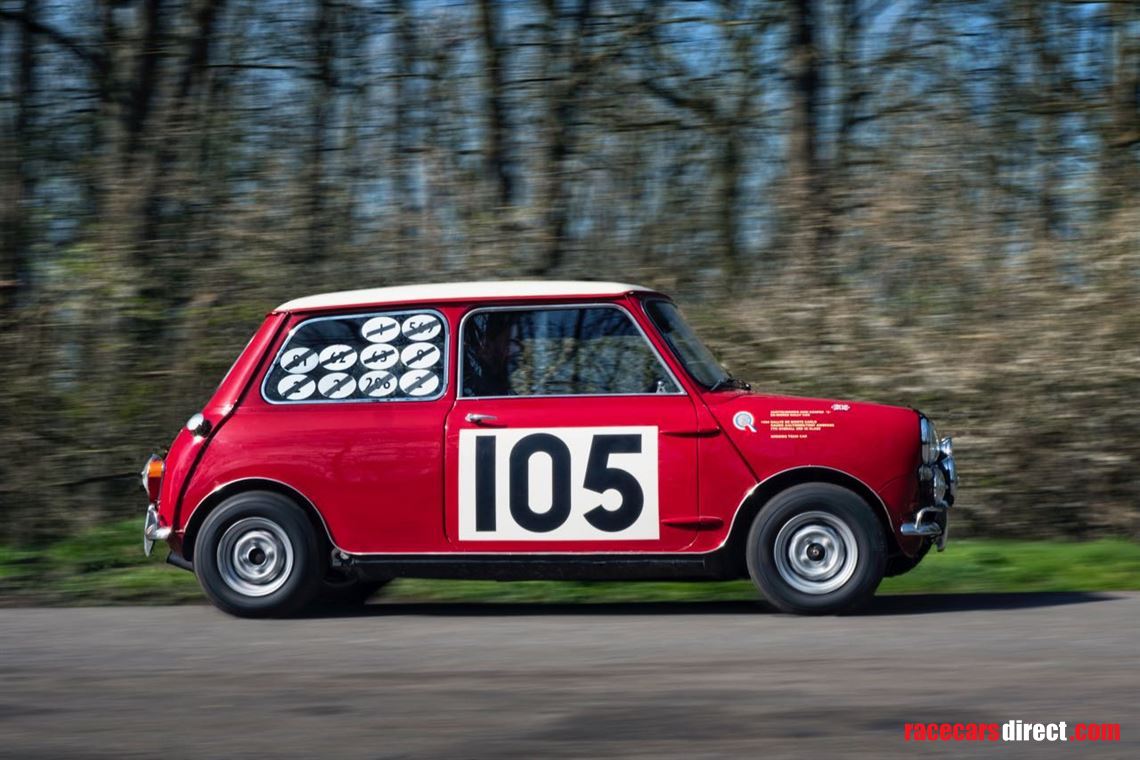 All the Team cars from the 1964 Monte Carlo rally were immediately retired from Competition due to their monumental success and appeared at various publicity events up and down the country. The winning car of 33 EJB appeared at the “Sunday Night at the London Palladium” with Bruce Forsyth. The other two successful Team cars being 570 FMO driven by Timo Makkinen and 569 FMO Rauno Aaltonen. All three cars appeared soon after, at the Prestwich Hill Climb which was covered by the BBC. 33 EJB suffered from mechanical problems so Paddy Hopkirk drove 569 FMO bearing the race number “37” to emulate the winning car and recorded best time of the day. This was the last time 569 FMO appeared in public as a “Works” car and soon after was sold to favoured “Works driver” Mike Woods in November 1964.

In 1965 569 FMO appeared at the Bolton Motoring News Rally, driven by Geoff Halliwell and navigated by Mike Wood. It also appeared that same year at the Mullard Trophy Rally this time driven by Mike Wood/Geoff Halliwell, who were the winners closely persued by Tony Fall in his BRT tuned Appleyard car, CAK 500C. The car was entered for numerous other events during that year.

569 FMO went to a number of different owners until ending up in a private collection and later sold to Bernard Griffen in the 1980s. Bernard set about a full restoration over a period of time. Two further owners later and it finally ended up with the present owner who acquired the car on the 5th Nov 2003. Further restoration to the body work and a full mechanical overhaul was completed to return the car to its 1964 Monte specification.

For the car’s first outing it appeared at a private gathering in Scotland, where the car had spent many years of its life, called the “Scottish Gathering” held by an elite gathering of ex- Ecurie Ecoss cars.

In 2004 The Mini Club Register were carrying out a “Minis to Monte Rally”, which seemed an appropriate event to enter, especially as it was to celebrate the 40th Anniversary of the 1964 Monte Carlo Rally, which 569 FMO played such an important role.

In 2005 569 FMO was invited to appear at the Vienna Motor Show to promote the new BMW Mini and appeared resplendent on the motor show stand in its original red and white livery. Later that year FMO appeared at the MCR Day at Beaulieu with other “Works” cars. 2005 also saw FMO appear, at the invitation of Lord March, at her first of many participations in the Goodwood Festival of Speed, on the Rally Stage and driven by no less than Rauno Aaltonen. When interviewed, on the press day by Tony Mason of the BBC and asked “what was it like driving your old car after more than 40 years”, Rauno’s reply was “Just as I remembered it”.

January 2009 saw FMO again in action at Race Retro, Stoneleigh Park, where she was again driven on the rally course by Rauno. That same year FMO appeared at The Gaydon Heritage Museum where she was on show next to her sister car 33EJB, for the first time for 45 years.

2011 saw FMO at the HRCR Open Day again at The Gaydon Heritage Museum. FMO then underwent a complete engine and gearbox re-build.

February 2014 FMO was exhibited in Belfast for the Paddy Hopkirk golden anniversary of the Rallye Monte Carlo Victory alongside 33 EJB.

Rarely do original Works BMC Mini’s appear for sale. With this particular car possibly being the most campaigned original works mini of the past 10 years.

The car remains in its 1964 Monte Carlo Specification. Provided with the car is an impressive array of history, documentation and historical photography.

Maintained to the highest standards and with no expense spared this import piece of Rallying and Monte Carlo history is offered for Sale and can be viewed and inspected at our premises in Warwick.

For further information on this car or to arrange a viewing or test drive, please contact us on our email address at enquiries@jmehealeys.co.uk or call our workshop on +44 01926 499000

Following his P3 Overall at 1968 Monte Carlo, Rauno Aaltonen had this Recreation built for himself.

have a 1963 cooper rf60 log book and heritage certificate. 997 . STEWART AND ARDEN DELIVERED NEW XMAS CLEARENCE. DONT DWELL AT THIS MONEY. SNOOZE YOU LOOSE. IDEAL FOR RACE CAR. AND YOU CAN RE-IMPORT IN UK FOR V5C.