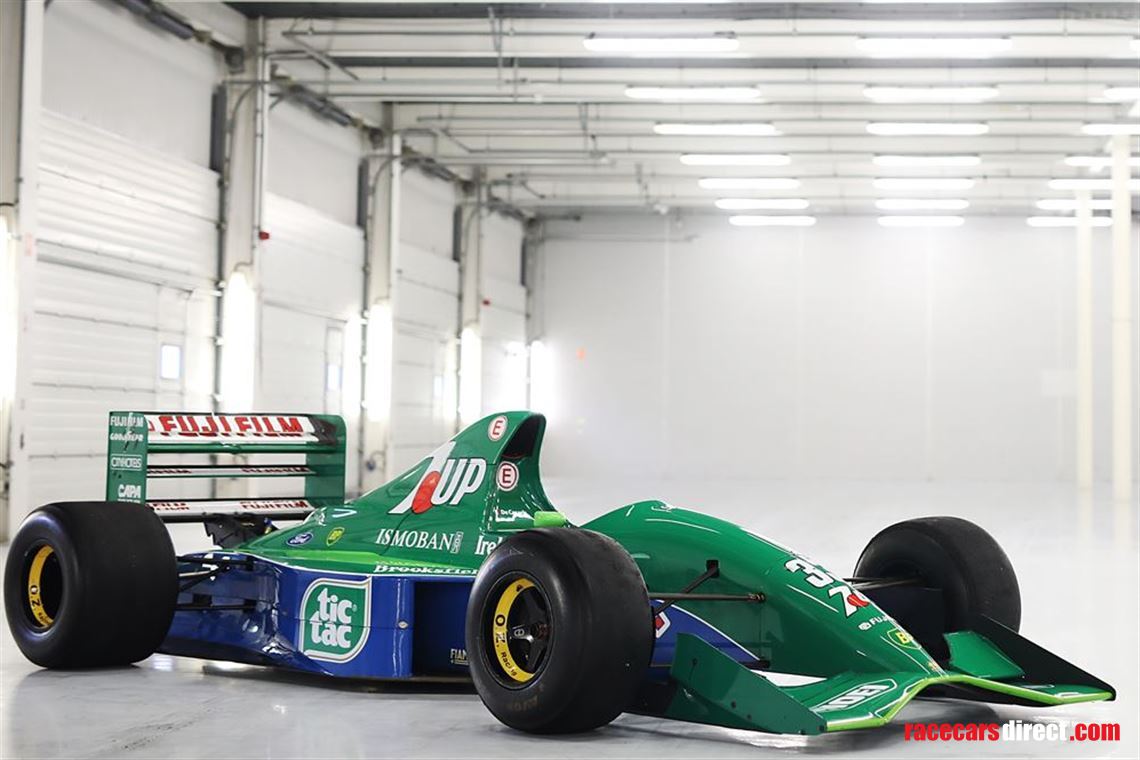 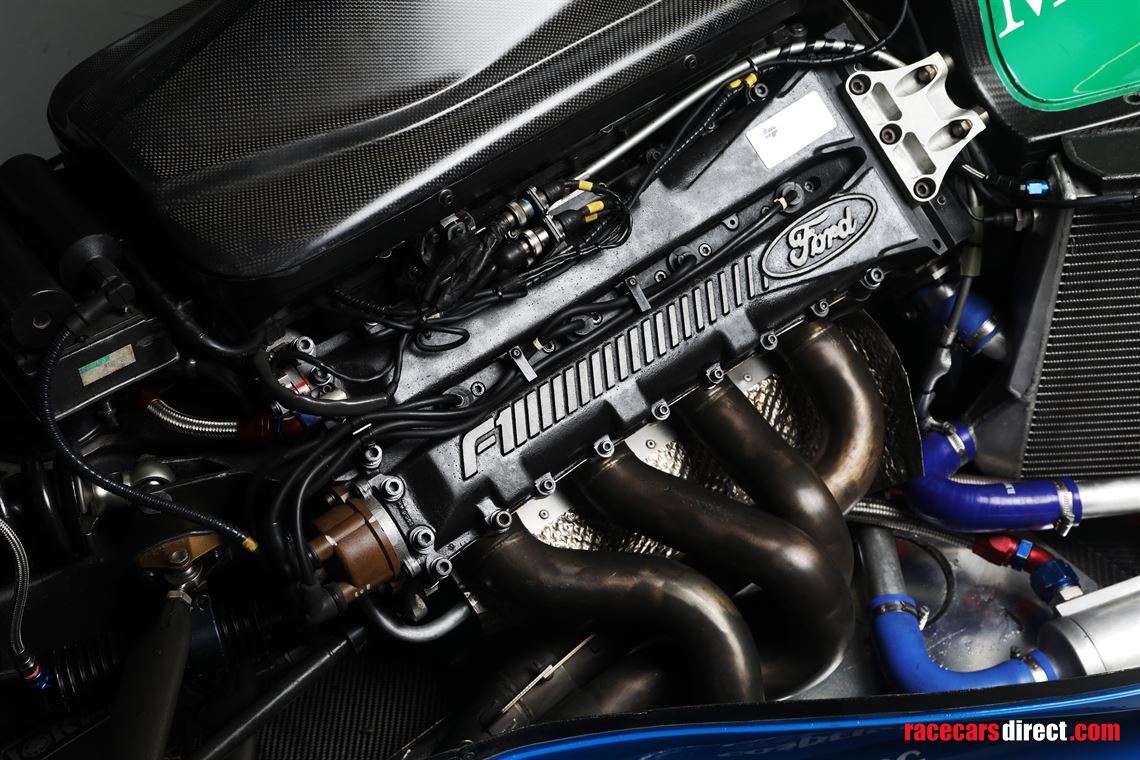 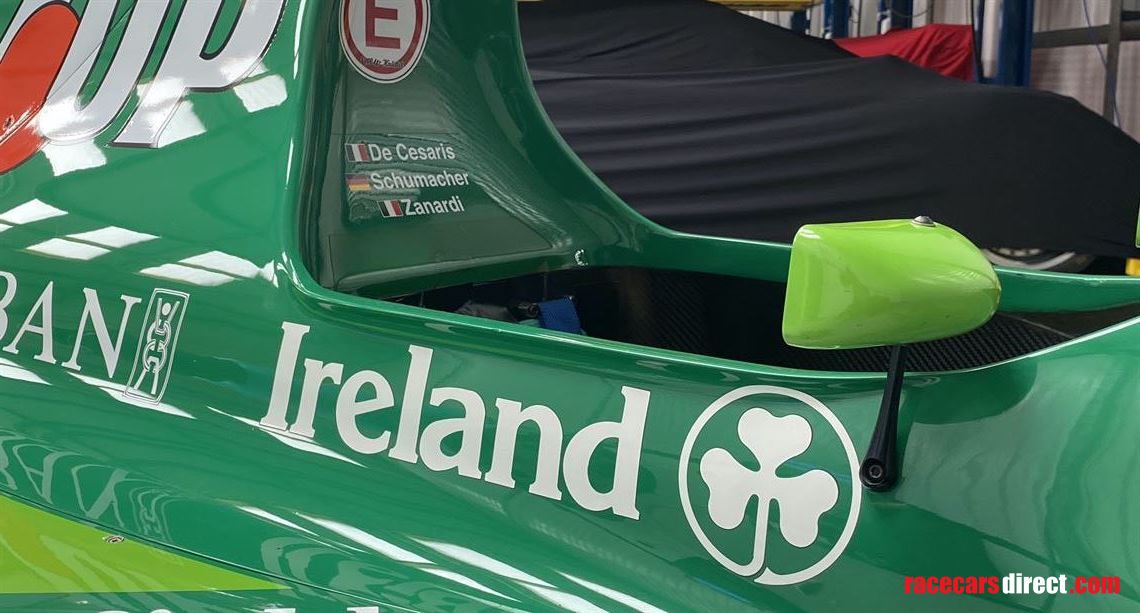 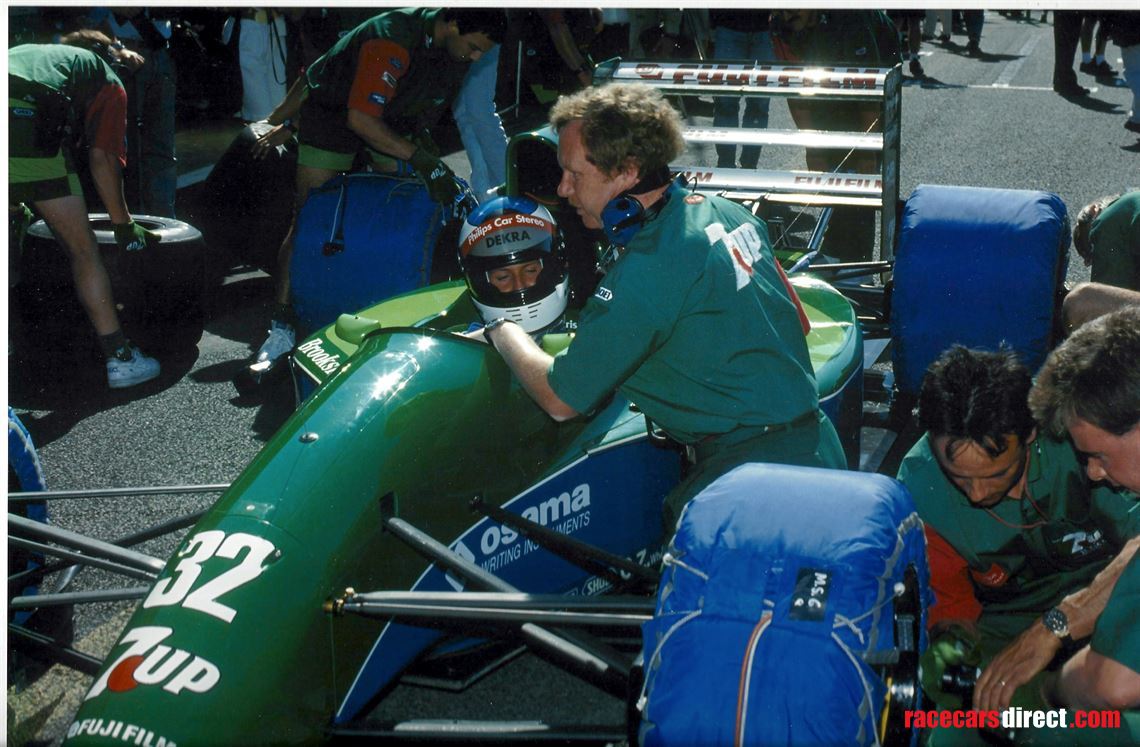 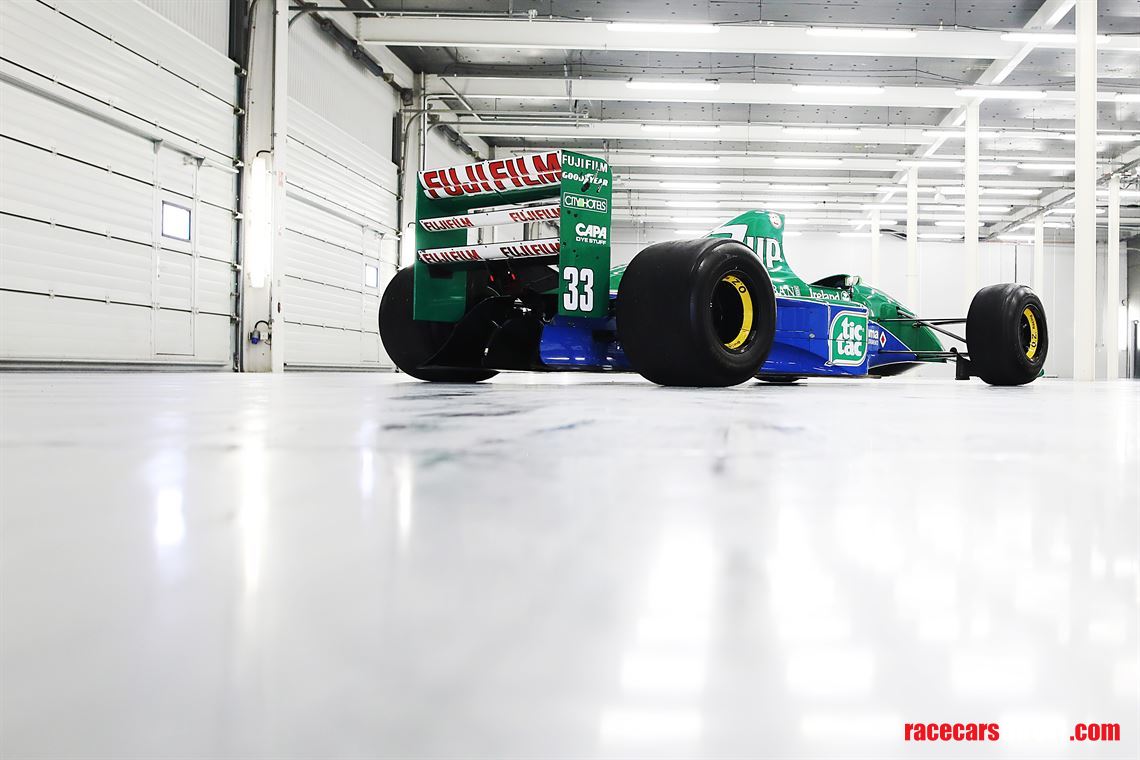 This car famously launched the career of 7-time World Champion Michael Schumacher who drove this car at the Belgian GP in 1991 – his first ever Grand Prix.

•Driven by Andrea De Cesaris, Michael Schumacher and Alex Zanardi.
• One of only 7 cars built, and 1 of only 2 driven by Schumacher.
• In its debut season the 191 claimed 1 fastest lap and ran as high as second in a GP (this car)
• The first Jordan Grand Prix Car, Jordan can trace its history through to the current Aston Martin F1 Team.
• Jordan finished 5th overall in the 1991 F1 Constructors World Championship behind McLaren, Williams, Ferrari and Benetton.
• Winner of the Autosport Racing Car of the Year Award in 1991.
• In 2018 it was awarded the prize of Best Looking F1 Car of all time by The Telegraph (UK)

History
The Jordan Formula one team was started in 1991 by Eddie Jordan, whose team had been successful in the International F3000 Championship. After securing 7-Up (Pepsi Co) backing for the team, the team burst onto the F1 Grid with the exceptionally beautiful 191 designed by ex Reynard designer Gary Anderson and powered by a Cosworth HB engine.

From the first test the car was immediately impressive as experienced F1 driver and initial test driver John Watson would comment, and the car went on to perform well above what was expected of a new team, finishing 4th and 5th in Canada - only the 5th race of the Championship.

This particular car was first used by Andrea De Cesaris at the Hungarian GP in 1991. After qualifying 16th, Andrea made steady progress in the race to finish 7th at the Hungaroring – a notoriously difficult track to overtake at.

2 weeks later the Jordan team found themselves at the centre of attention when the young Michael Schumacher was selected to drive at the Belgian GP in place of Bertrand Gachot who had found himself the wrong side of the law after a disagreement with a London taxi driver…which itself threw the spotlight on the small Jordan team.

After some negotiations between Jordan, Mercedes-Benz and Willi Weber Michael Schumacher’s manager, Michael was confirmed as Gachot’s replacement. Michael was immediately impressive. After a brief shakedown earlier in the week at Silverstone South circuit, and despite not knowing the Spa circuit, he immediately went faster than his experienced team mate De Cesaris who was considered a Spa specialist….and all this was in De Cesaris’s race car (set up for him not Schumacher) as De Cesaris had elected to drive the spare car as he was unhappy with the balance of his race car, and after Michael’s car developed a small water leak at the beginning of the session, he jumped into Andrea’s race car and ended up 8th fastest overall, impressing the team and paddock with his immediate speed.

Michael famously started the Belgian GP 7th but retired on the first lap after a clutch problem, however his performance that weekend made him hot property and Flavio Briatore signed him for the Benetton F1 team the following week, Michael’s F1 career had taken off….and the rest is history!

On race day this car was driven by Andrea De Cesaris, who after starting 11th made impressive progress through the field to run second to Ayrton Senna, however with 3 laps remaining he was forced to retire from the GP through lack of oil pressure, a heart-breaking experience for the team and driver, as he had been catching Senna and a first Jordan win looked a distinct possibility.

Chassis 6 was designated the spare car for the remaining races in the F1 calendar at the following Italian GP, Roberto Moreno (ejected from the Benetton team and replaced by Schumacher) joined De Cesaris, however he was quickly replaced after the Portuguese GP and Italian up and coming star Alex Zanardi took his place.

Zanardi famously won the 1997 and 1998 Indycar Championships before a losing both his legs in an horrific accident in 2001. After a successful return to racing he also won 4 Gold Medals at the Paralympics Hand Cycling between 2012 and 2016 and 12 World Championship Gold medals between 2013 and 2019.

Following its use in the 1991 F1 World Championship, 191-6 was sold to Belgian Car Collector Jean Blatton and remained in his collection until 2005. The car was then purchased by Didier Siruge who occasionally raced the car in the Boss F1 Series and took the car to Goodwood Festival of Speed a number of times. 191-6 remains in working condition to this day, and the Ford HB engine is still rebuilt by Langford Performance Engineering – the same company that rebuilt the engines in 1991!

Most recently the car has been demonstrated at the Masters Historic Race Weekend at Donington Park in 2021. Complete with starting equipment including pre heater, impressive history file including certificate of authenticity, Schumacher signed model car and the original race steering wheel framed in a display case, this a unique opportunity to own Michael Schumacher's first F1 car and one of the most beautiful F1 cars built.