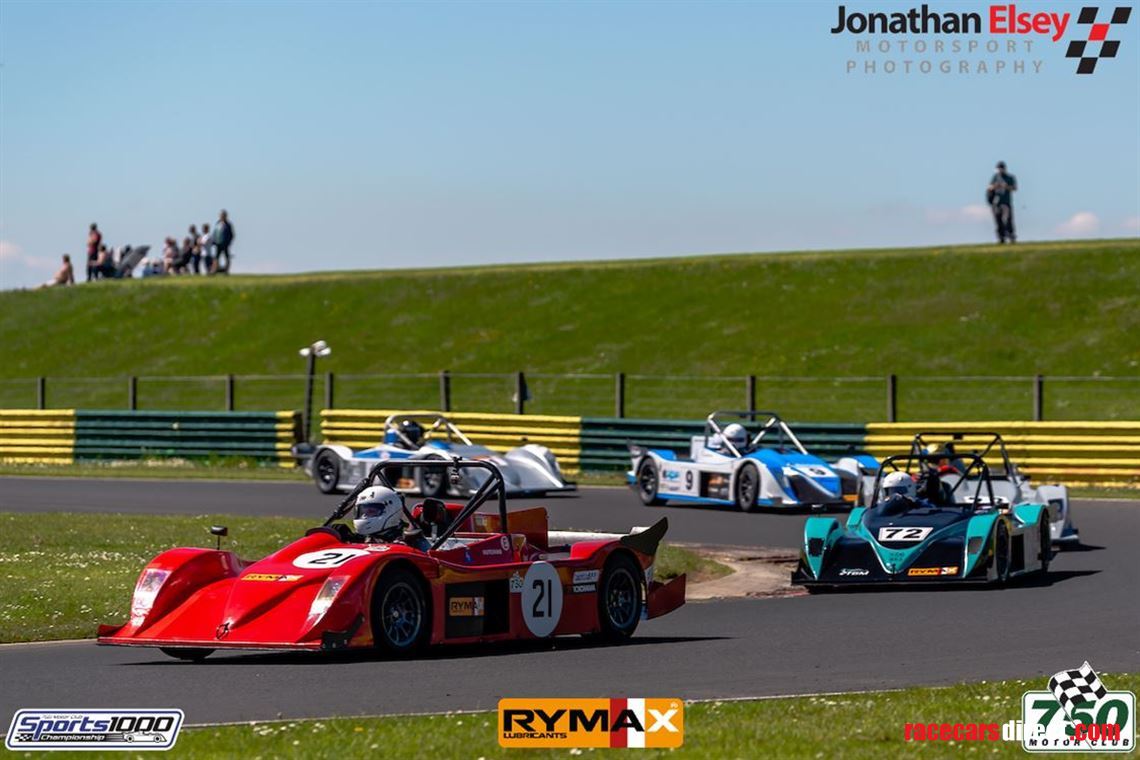 The second meeting of the Rymax Lubricants Sports 1000 Championship travelled to sunny North Yorkshire at the former RAF airfield, Croft. The summer weather would make the tarmac greasy, but this would not stop the lap record from falling.

The two Spires’ of Ryan Yarrow and Rich Miles would be separated by 0.1s with Yarrow taking his first qualifying pole of the year. Victor Neumann would line up third on the grid 0.5s away from the top spot and Daniel Larner under 0.8s back in fourth. Tom Johnston would round out the top 5 with his best qualifying on the year.

Silverstone race winner Michael Roots was suffering with mechanical issues and qualified in 11th place, we would be watching his progress to see if he had fixed what had plagued his session.

The defending Champion Yarrow took the lead from the start with Miles close behind. Dan Larner moved up to the podium positions in third with the Mittell of Victor Neumann close behind him. Larner held off Neumann for a number of laps before sliding wide at the exit of the Chicane allowing Neumann to move up.

Silverstone Race 2 Winner Michael Roots was still struggling with an ailing car further down the field but still managing to stay in the top seven for the first half of the race.
Colin Chapman had elected to start from the rear of the grid due to clutch issues during qualifying and was beginning to make his way through the field.

Yarrow while leading broke Christopher Wesemael’s lap record by 0.2s with a 1m 25.07s even with the sun soaked greasy circuit. After holding seventh at the start, Tom Johnston spun at the Chicane falling back to 12th however showing great pace to get back into the top 10. Stephen Dean and Tim Hoverd continued their battle for eighth for the whole race staying within a few seconds of each other. The sweltering conditions were making the circuit extremely slippery, easily overheating the tyres with all the drivers having to manage their pace to accommodate the differing conditions from testing.

Larner in his Mittell had managed to catch back up to Neumann and began challenging for the final spot on the podium. Larner made a great exit from the Chicane and drafted alongside, he tried around the outside of Tower squirming under the brakes and sliding wide keeping it on track allowing Neumann to pull another gap.

Back at the front Rich Miles was closing the gap to leader Yarrow to within 0.8s which would band around as they traded sector times around the circuit.
Colin Spicer was having an unusually quiet race in Sixth until a broken Hub squandered his chances of another good finish in the points. Jonathan McGill had a fantastic race in fifth managing to take second place in the Sporting Cup after a fantastic start to the race.

Roots closed out his race in Sixth managing to take as many points as possible with the issues that continued from Qualifying.

Rich Miles produced a mega start from the grid straight in to the lead, before the first corner Clervaux ahead of Yarrow. An incident in Hawthorn meant Yarrow would face the wrong way with Chapman spinning in avoidance. The Champion would not come out unscathed with damage to the front of his car. Chapman managed to avoid any contact with the whole field taking evasive action.

Stephen Dean and Tom Johnston would take advantage of the commotion and were neck and neck for the first 4 laps with Dan Larner catching them after taking evasive action at the first corner in Sixth. A train of Nine cars all fighting for Seventh position waged on with a returning Phil Hutchins, all over the rear of Tim Hoverd after a suffering a DNF in Race 1. Matthew Minett was stung again at with the same issues that he had suffered at Silverstone, after showing speed at the first qualifying session of the season.

Back at the battle for Fourth, Johnston licked the stamp and sent it at the Complex passed Stephen Dean after Larner had charged up to them. The red Mittell took advantage of the move and also passed Dean before the last corner in Fifth. Not losing time, Larner drafted Johnston into Tower on the next lap and moved into Fourth.

The leader Miles in his Spire GT3 RM was setting fastest laps to break away from the two Mittells’ of Michael Roots who had sorted his issues of Saturday and Victor Neumann close behind shadowing his every move.

Yarrow had managed to break through the chain of Nine cars into Seventh with a charge through the field catching the cars in front of him very quickly. It was heartbreak for Larner who had done all the hard work of getting back into a good points paying position, pulled off with an electrical issue which ended his run prematurely.

Andrew Timpson and Ian Hutchinson were both struggling after good testing days, the heat causing more issues than just a greasy track for these high speed machines.
The two Mittells’ of Roots and Neumann starting lapping within 0.1s of Miles showing their outright pace they had threatened earlier in the week. Miles however had made the gap he needed to secure his first win of the season.

Colin Spicer finished in a respectable Ninth place after borrowing a Hub from a fellow competitor and fitting it overnight. Yarrow had completed his charge back up the field completing the race in Fourth after falling back to 12th on the First lap.

The next round is at Snetterton 300 on the 17th/18th July. We look forward to seeing your there !

The UK's most affordable sports-car championship 300/bhp per tonne

Enter now - Remember, the race one grid is set by order of entries being received!

Control the camera from the drivers seat! No more missed footage!