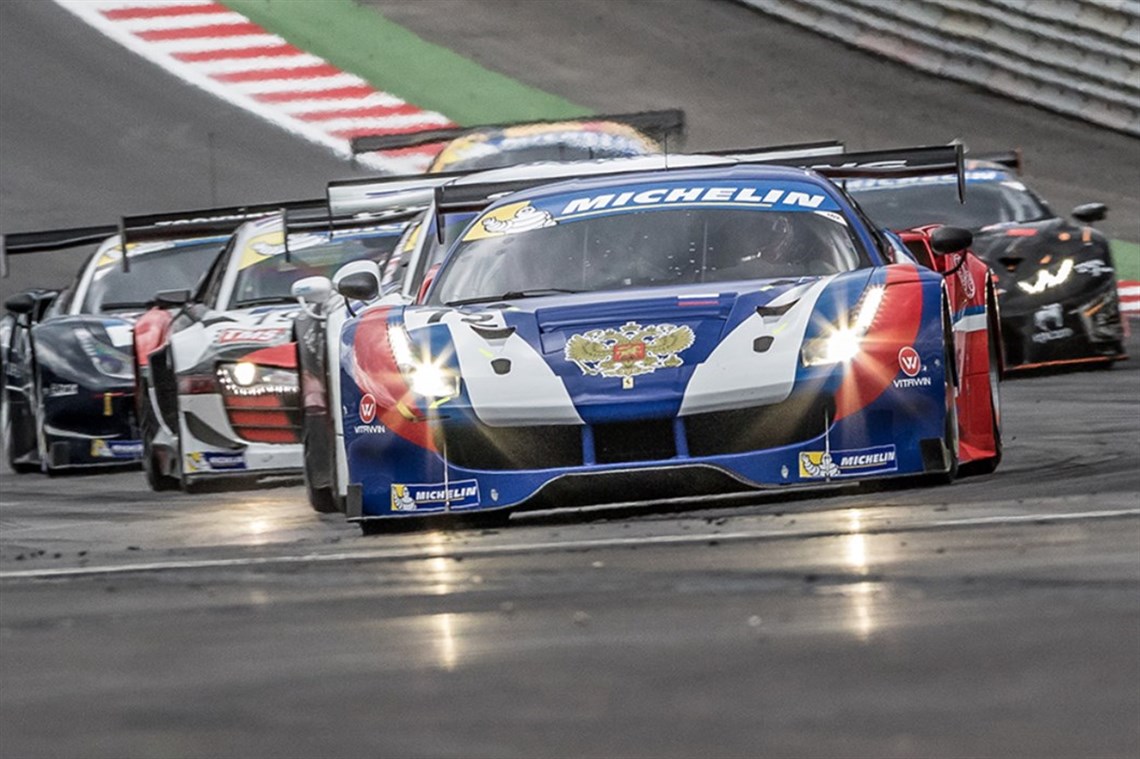 The SMP Racing Ferrari 488 Of Alexsey Basov and Victor Shaitar took a lights to flag victory at the Red Bull Ring to score their second victory in the Michelin GT3 Le Mans Cup.

The Russians finished ahead of the #88 Mentos Racing Porsche of Egidio Perfetti and Klaus Bachler, who had to fend off the challenge from the #34 TF Sport Aston Martin Vantage of Salih Yoluc and Euan Hankey for the whole race.

The race started in dramatic fashion at the first corner. Basov’s #72 SMP Racing Ferrari led the field into the turn with Perfetti’s no88 Mentos Racing Porsche right behind the #55 McLaren of Hiroshi Hamaguchi. The Porsche was touched from behind by one of the Ferraris, which in turn pushed the Porsche into the McLaren. Hamaguchi spun around and clipped by Johnny Mowlem’s FF Corse Ferrari and then hit by the #26 Classic & Modern Racing Ferrari of Nicolas Misslin. With the McLaren stranded in the middle of the track with a detached wheel, the Safety Car was deployed.

Misslin returned to the pits into retirement while Mowlem was able to rejoin the fray without losing a lap thanks to the Safety Car.

The race resumed with the #72 SMP Racing Ferrari ahead of Yoluc’s TF Sport Aston Martin and Perfetti’s Mentos Racing Porsche. The Porsche was soon challenging the Aston Martin for second place allowing the leading Ferrari to pull away as the two battled for position. Yoluc fended off the challenge for several laps but eventually Perfetti got alongside the Turkish driver to force his way into second place.

The #14 AF Corse Ferrari of Pierre-Marie De Leener had its first of many visits to the pitlane that saw the mechanics working to resolve an issue in the engine bay.

Meanwhile Perfetti had opened up a gap to Yoluc’s Aston Martin only for the Norwegian to run off the track at T8 and allow the #34 TF Sport Aston Martin back into second place.

The second Safety Car period was declared when the #5 FFF Racing Team by ACM Lamborghini of Taiyou Iida went into the gravel at T1 and had to be snatched by the marshals. The Lamborghini was allowed to return to the track and racing resumed with the front runners now all back together.

At the restart the #72 Ferrari pulled away as the battle between the #88 Porsche and no34 Aston Martin resumed, with Perfetti getting the upperhand on the run into Turn 1. Johnny Mowlem in the #25 FF Corse Ferrari had made up lost ground and thanks to the Safety Car was now able to pass the #51 AF Corse Ferrari of Thomas Flohr for fourth place and was chasing down the battling Perfetti and Yoluc as the pitstop window approached. Mowlem briefly led the race as the three cars ahead went in for their pitstops and one lap later the English driver pitted to hand over to Ivor Dunbar.

After the pitstops the #72 SMP Racing Ferrari of Victor Shaitar held the lead, but the #34 TF Sport Aston Martin of Euan Hankey had got ahead of Klaus Bachler’s Mentos Racing Porsche at the pitstop, but the Austrian soon caught and passed his rival to regain the second place.

The #5 Lamborghini had come into the pits and Iida had handed over to Andrea Calderelli only for the Italian to hit the barriers on the pit exit and this finished the race for the Chinese team.

The scene was now set for an epic battle to the flag as the #88 Porsche and #34 Aston Martin chased each other closely, while Francesco Castellacci in the no51 AF Corse Ferrari was lying in fourth place but lapping faster than the two cars ahead.

Shaitar looked on course to take an easy victory but with 15 minutes left on the clock the Russian was seen skipping across the gravel trap at Turn 2 after the F488 failed to turn into the corner as Shaitar applied the brakes. The SMP Ferrari regained the track quite quickly and still in the lead but with a reduced gap of 3.5 seconds to the chasing duo of Bachler and Hankey. If there was anything wrong with the #72 Ferrari the thought was dispelled as Shaitar set the fastest lap of the race with one minute remaining on the clock.

Hankey’s TF Sport Aston Martin was closing rapidly on the no88 Porsche and looked set to take the position from Bachler but then the British car backed off as Hankey was forced to save fuel in the last few laps of the race.

The chequered flag was waved for the third time in 2016 with the #72 SMP Racing Ferrari crossing the line to take the second victory in row for the Russian team. Austrian Klaus Bachler scored a second place for himself at home and for his teammate Egidio Perfetti, with Euan Hankey bringing the TF Sport Aston Martin Vantage to the flag in third place, which maintained their championship lead after three rounds of the Michelin GT3 Le Mans Cup.