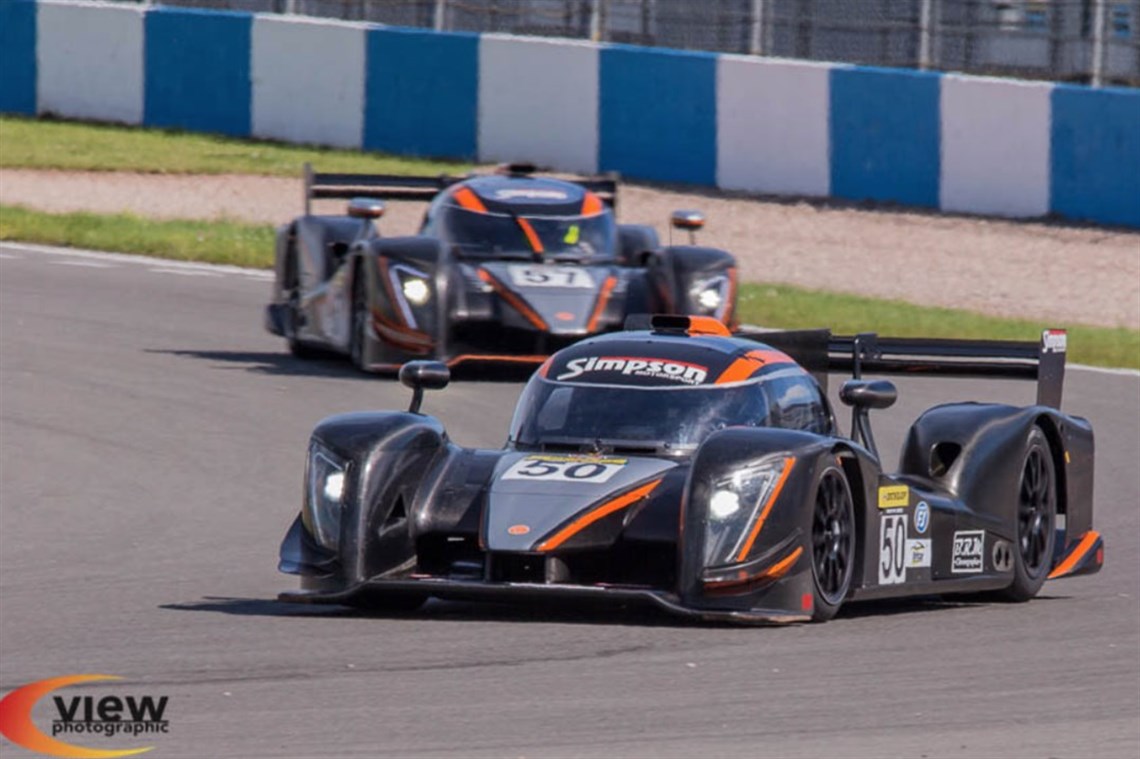 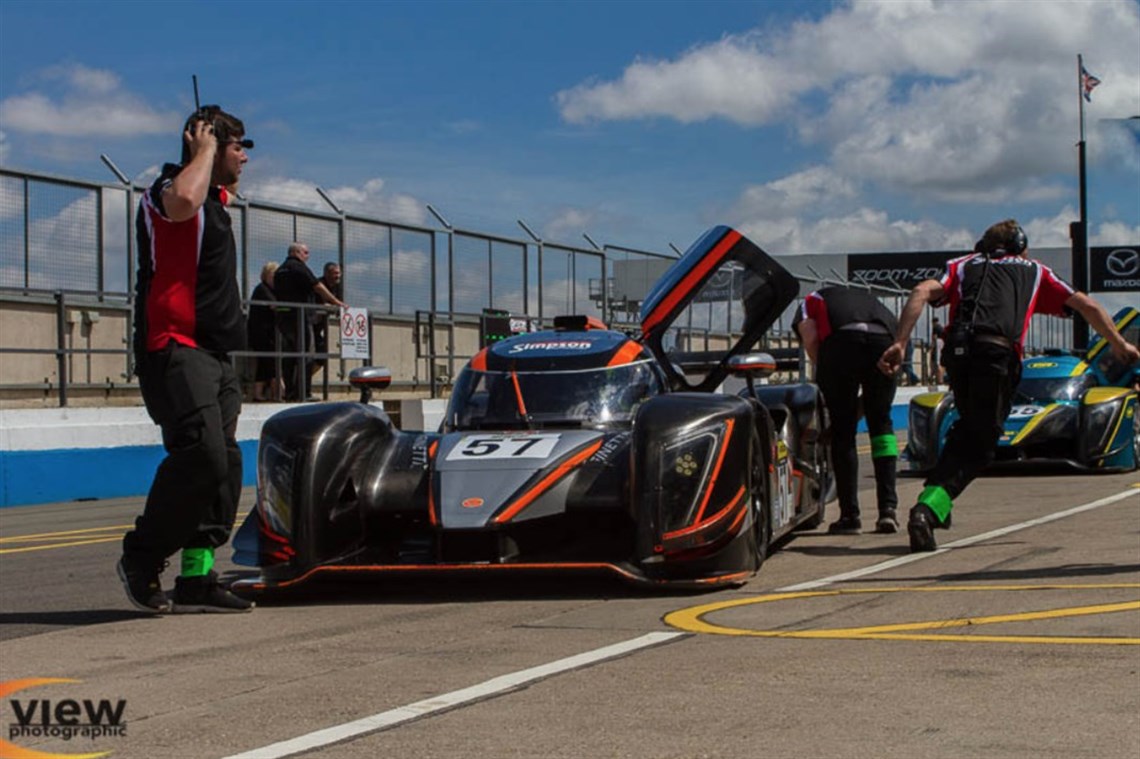 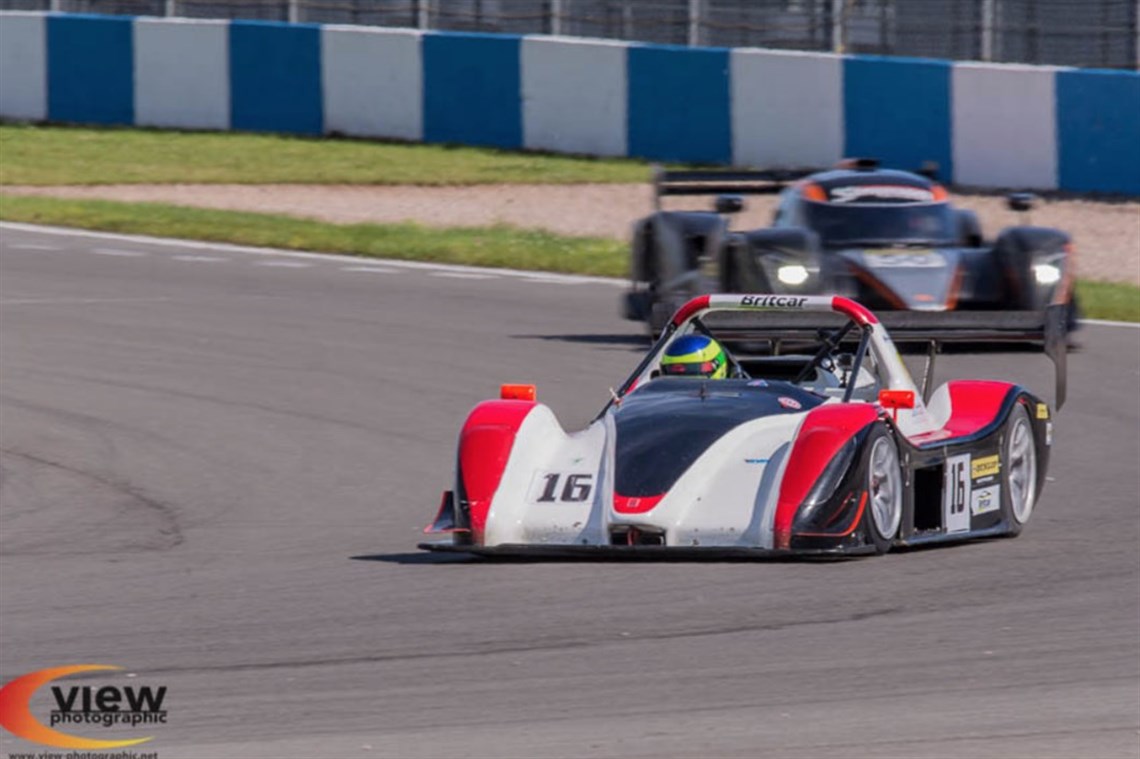 Craig Fleming got the call to race a Simpson Engineering – managed Ginetta G57 at 11pm on Saturday night.  After pondering it overnight, 12 hours later he was in the cockpit testing, by afternoon tea he was racing at the back of the pack, and an hour later he took a sensational win.

No stranger to sportscar racing, Fleming races a Juno in the Open Sportscar Series, and has history in the G57, having raced the car in the VdeV championship at Barcelona earlier in the season. Here’s the fascinating story of the event.

There had been frantic action in the Race Performance pit garage in the run-up to race-time; pole-sitter Ollie Jackson’s G57 needed some glitches sorted, and Colin White’s car was having the drive shafts replaced due to a failed gaiter. Jackson just made it out to head-up the grid, but White was forced to join from the pit lane once the pack had taken the start.

And what a start it was! Alex Kapadia’s Radical was looking very assertive as the group stuttered towards the start line, and once the red lights went out the Radical swooped to the left-hand side of the track, drew alongside Jackson’s Ginetta, and took the lead in an audacious move around the outside at Redgate. Kapadia had his lap of glory in the lead, but by the second tour Jackson was in front, and began pulling out a gap to the chasing Radical SR8 of about a second every lap. Craig Fleming initially held third place in the #50 Simpson Ginetta G57, but began slipping back into the clutches of stablemate Ade Barwick in the sister G57, whilst Colin White was recovering from his pit-lane start in the similar CWS-liveried machine.

Fleming’s issues continued, and he was left at the back of the field once passed by White, who promptly undid his hard work with a quick spin at the Old Hairpin. Coming up to the half-way point of the 60-minute race, Ollie Jackson’s lead was the best part of a quarter of a minute over the Radical, but a spectating Charlie Robertson had observed from the commentary box that the front of the leading G57 was vibrating heavily, and when Jackson made his mandatory pit stop with 33 minutes left on the clock, precious time was lost as the front splitter was sorted out, and this period of the race saw the hopes, fears, laughter and tears of the four Ginettas condensed into 10 crazy mid-point minutes. Craig Fleming pitted, then Ade Barwick, seemingly with no issues, but Ollie Jackson had pulled off at Goddards, the team reporting that the oil pump pulley had failed and thrown the drive belt. Colin White was pitbound just a few laps later, and his G57 was trollied into the garage, retiring with the self-same pulley concern.

This left the Radical SR8, with Paul Spencer now at the wheel, in the lead, despite an over-long pit stop, though the lead was tenuous – Ade Barwick was only 10 seconds behind, then next time around just five seconds, and with 20 minutes of the race left to run, Ginetta’s new Commercial Director was turning his self-confessed test run into a potential race win. Craig Fleming, though had now put his early-race issues behind him, had relieved Spencer of the runner-up spot, and was mounting a challenge on Barwick’s lead, which was thrown away by a spin at Goddards just 10 minutes from the end.

Once the vanguard, now the guard’s van, Barwick quickly unreeled himself from last place, and as the flag fell after 53 laps, a surprised Fleming crossed the line nearly half a minute to the good, with Barwick a further 21 seconds ahead of Spencer’s Radical. “I struggled with pace to begin with” admitted Fleming, whilst Barwick was realistic in his post-race analysis; “I threw it away! I did, I threw it away, but Craig was catching me anyway, he won fair and square”
Despite a small grid, the competitors had given us an intriguing race – just think what could be possible once the entry is quadrupled when the series becomes a championship next season.

Full Season Arrive and Drive including all race Entries starting from £12000.

Built in 2011, last races in 2013, kept in a private collection since, in excellent condition.

The latest 2020 Style Simulator Car built on a Motion Platform in any colour that you choose.