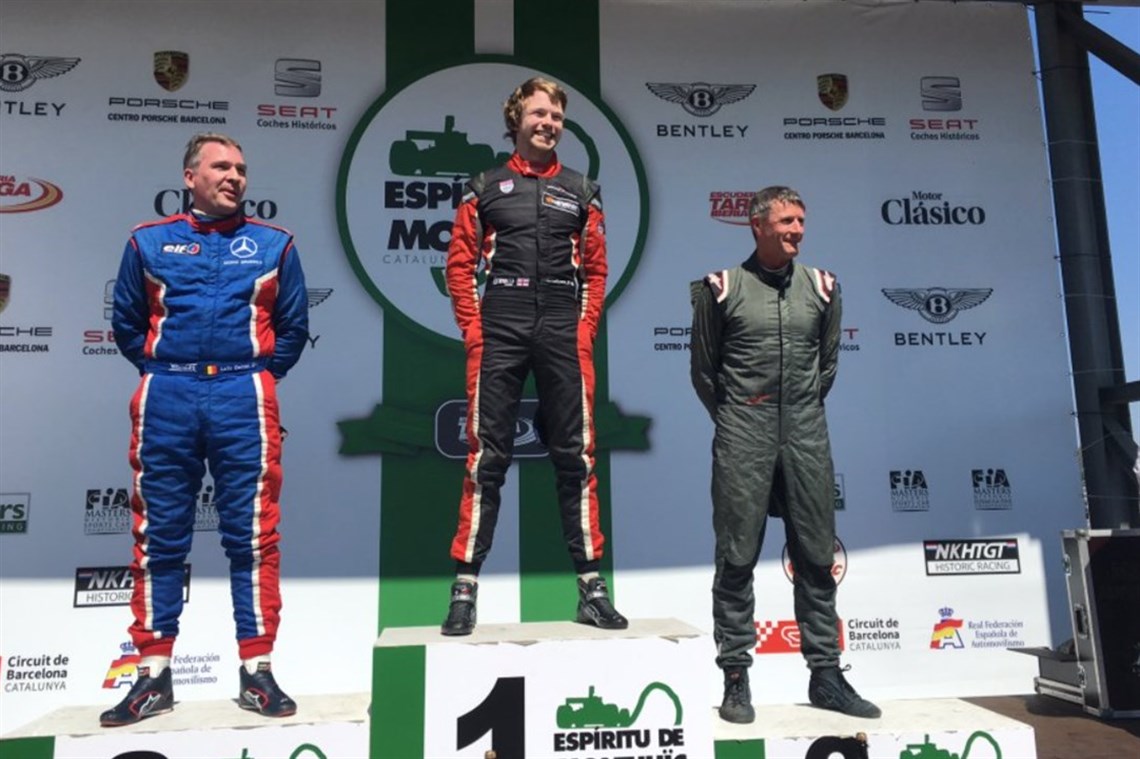 A broken throttle linkage on Saturday and a three-place grid penalty for Sunday’s race couldn’t stop Michael Lyons from taking his first FIA Masters Historic Formula One win of the season. At Barcelona, the RAM Williams FW07B driver used a good start to move up from fourth to second and then passed Loïc Deman’s Tyrrell 010 for the lead before the end of lap 2. Lyons then maintained a two-second gap that only fluctuated because of traffic to take victory after 15 laps. Deman held off the Tyrrell 010 of Andy Wolfe, who charged up from fifth to third on the first lap and kept the Belgian busy all race.

“I HAD A GOOD FIRST CORNER”, SAID LYONS. “PROBABLY THE LEFT SIDE OF THE GRID HAD A BIT MORE GRIP, SO THOSE ON THE OUTSIDE ALL HAD A GOOD RUN INTO THE FIRST CORNER. I THEN HAD A NICE RUN ON LOÏC BUT DECIDED THE BETTER OF IT, SO I WAITED AND PASSED HIM ON THE SECOND LAP. THE GAP WENT UP AND DOWN BECAUSE TRAFFIC WAS DIFFICULT TODAY – I SEEMED TO CATCH IT IN ALL THE WRONG PLACES!”

“Two second places is not bad, it could be a lot worse”, said a philosophical Deman. “Today was very hard and physical, Andy pushed me until the end, I really had to work for it.”

“We made some major changes to the car last night”, Wolfe said about his early charge, “and bolted on a set of new tyres. So I knew I had everything to do in the first few laps.”

The top-three were tracked by pole-sitter Greg Thornton for three laps before the Lotus 91 began to suffer from an oil leak. Thornton did return to the track after a long visit to the pits but the winner of Saturday’s race finished well out of the points. His place was quickly taken by Steve Hartley (Arrows A4), who drove a lonely race to fourth. Christophe d’Ansembourg initially led Simon Fish’s Ensign N180 in fifth before dropping back and retiring. Fish was followed home by Joaquin Folch (Brabham BT49) and Mike Wrigley (Williams FW07C) in sixth and seventh. Frenchman ‘Mr John of B’ finished eighth in his Ligier JS11/15, having passed pre-78 class leader Max Smith-Hilliard on lap 15.

Max Smith-Hilliard made it two out of two in the pre-78 class, his Shadow DN5 easily fending off Jason Wright’s Shadow DN8 and Jamie Constable’s Lola T370. Constable was second in class for most of the race but had to give way to Wright two laps from the end.

“IT WAS STRAIGHTFORWARD, REALLY”, SAID SMITH-HILLIARD ON HIS MAXIMUM POINTS HAUL, “ALTHOUGH SIX LAPS FROM THE END I HAD TO BACK OFF BECAUSE OF A NASTY VIBRATION. THAT’S WHEN I LEFT THE LIGIER IN FRONT, SINCE IT WAS NOT IN CLASS.”

“I got a bad start”, said Wright when asked why he was unable to challenge Smith-Hilliard. “But I did get Jamie [Constable] at the end of the straight. We were in a group of cars, very entertaining, and I didn’t want to pass him too soon.”

“This man is too good on the brakes!”, said Constable about the American’s move.

The two were split from class winner Smith-Hilliard by the Lotus 87B of newcomer Jonathan Holtzman, who recently acquired the Lotus 87B that was previously raced in the championship by Nico Bindels.