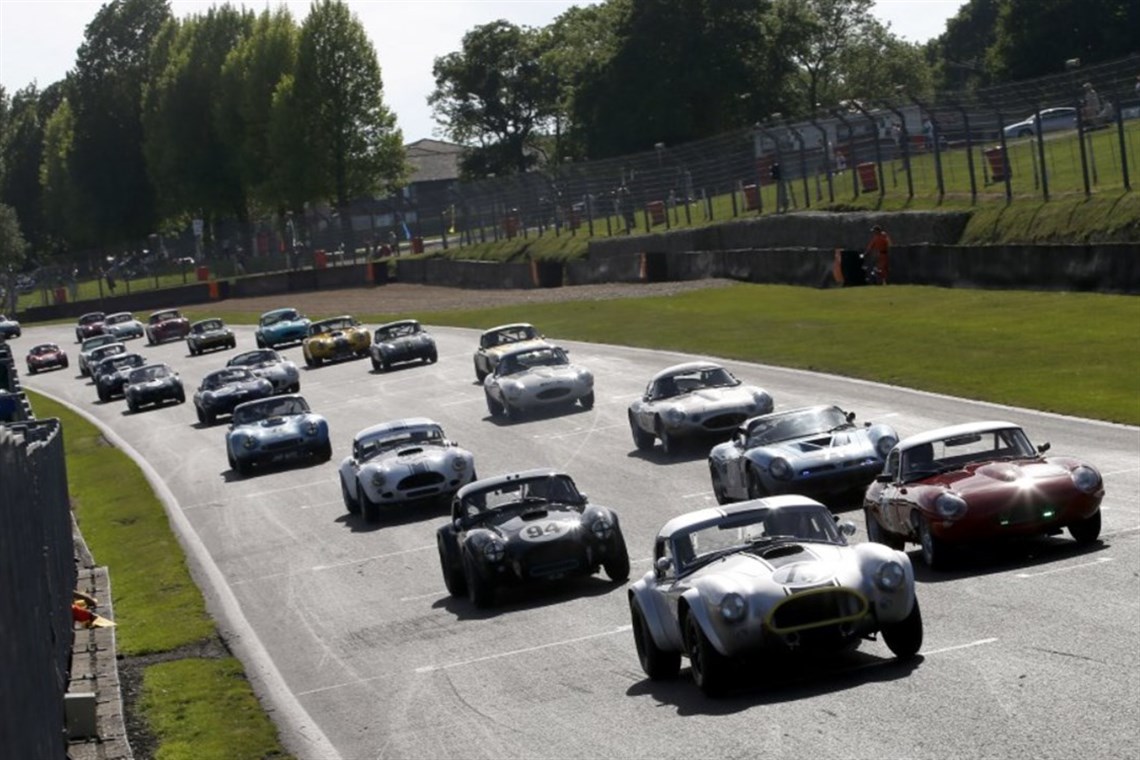 Michael Gans in his AC Cobra had to do it all by himself but upon hearing that team mate Andy Wolfe had dislodged his thumb during his off in the preceding FIA Masters Historic Formula One race he knuckled down to hold off a charging Mike Whitaker (TVR Griffith) and win the Stena Line Gentlemen Drivers race at Brands Hatch.

THAT WAS QUITE A SURPRISE WHEN I HEARD, ‘YOU’RE FINISHING THE RACE!’”, SAID GANS, STILL BATHING IN SWEAT. “I’M KNACKERED, I’M IN AWE OF MIKE [WHITAKER] DOING THE FULL RACE ON HIS OWN.

“I think I could have caught him”, Whitaker said of his late-race charge, “but I’m not sure if I could have passed him. I know Michael, he’s quick. I was actually glad that the safety car came, it allowed me cool my brakes.”

Julian Thomas and Calum Lockie took third in their Jaguar E-type, Thomas having fought Gans during his opening stint. The Jag having lost its starter motor, it dropped back to fourth when the car had to be push-started after the driver change from Thomas to Lockie, who then repassed Roger Wills’ Bizzarrini 5300 GT for third.

“That was brilliant, I loved that”, Julian Thomas said about his tight battle with Gans during his stint. “We lost the time during the driver change because the starter motor went. We had to push-start the car.”

The drivers were given a bit of relief at the end when a beached Cobra caused the safety car to come out some ten minutes before the end of the 90-minute race, which was subsequently red-flagged right after the restart when the Michael Schryver/Will Schryver Elan went off and got stuck as well. The opening phase had also seen a short safety-car period for Martin O’Connell going off in his E-type.

Gans took a lights-to-flag victory having fought the Julian Thomas/Calum Lockie Jaguar E-type hard during the first part of the race. The pole-sitting Cobra of Karsten Le Blanc and Nigel Greensall was out after six laps, handing the chase to Thomas who had closed right up to Gans when after 23 laps the pit window opened. After the driver change, however, Lockie ended up in fourth, behind Whitaker’s Griffith and Roger Wills’ Bizzarrini 5300 GT. While Lockie took care of Wills on lap 37, there was nothing he could do about Whitaker, who in fact was chasing after Gans, closing a 32-second gap right after the pitstops to 18 seconds when the safety car came out. Gans’ lead was eliminated but the red flag that immediately followed the restart made the whole issue academic.

Wills finished fourth, ahead of the Rob Hall/Andy Willis AC Cobra and the Carlos Monteverde/Gary Pearson E-type. Next up was the battle for CLP class honours, the two leading Lotus Elans beating the Chris Chiles Sr & Jr Cobra and the Martin Melling/Jason Minshaw E-type across the line. In the end, Mark Martin and Andrew Haddon narrowly beat John Davison and Ed Morris in their intra-Elan tussle.

I GOT HIM AT THE START OF THE GP CIRCUIT”, HADDON SAID ABOUT HIS LAST-GASP MOVE ON CLASS RIVAL ED MORRIS, “AND THEN FIVE CORNERS LATER, A COBRA IS IN THE GRAVEL TRAP AND THE SAFETY CAR IS OUT!

Davison and Morris had been leading the entire race up until that moment, initially chased by the Ron Maydon/Brian Johnson Ginetta G4R and the Rick Carlino/Martin Donnelly Lotus Elan. Another Lotus Elan in with a chance dropped out right at the end when Nigel Greensall returned to the pits with an oil pick-up issue. This handed third in class to Michael and Will Schryver, but in the end their beached car wasn’t classified. Instead, Maydon and Johnson were given third place in their Ginetta.

Keith Ahlers and Billy Bellinger (Morgan SLR) led the C2 class from start to finish, but saw the Martyn Corfield/Jeremy Welch Healey 3000 close up right at the end. Early challengers Chris Clarkson and David Smithies in another Big Healey dropped away to retire after 14 laps. This gave the Simon Orebi Gann/Mike Bell Morgan Plus 4 SS third place in class.

Mark and James Bates (Porsche 911) held off Malcolm Paul and Rick Bourne (TVR Grantura) for C1 honours while Carl Richardson and Andrew Bentley (Morgan Plus 4) were the only survivors in B2. The same applied to Andrew Beaumont/Andy Middlehurst (Lotus Elite) in B1.

We offer a shared drivers seat for the GT&Prototype Challenge or SCC in BENELUX incl. the famous Spa

Realise a DREAM - Why not race a Ferrari

A race car to combine performance features of the GT3 R with running costs of the GT3 Cup car.