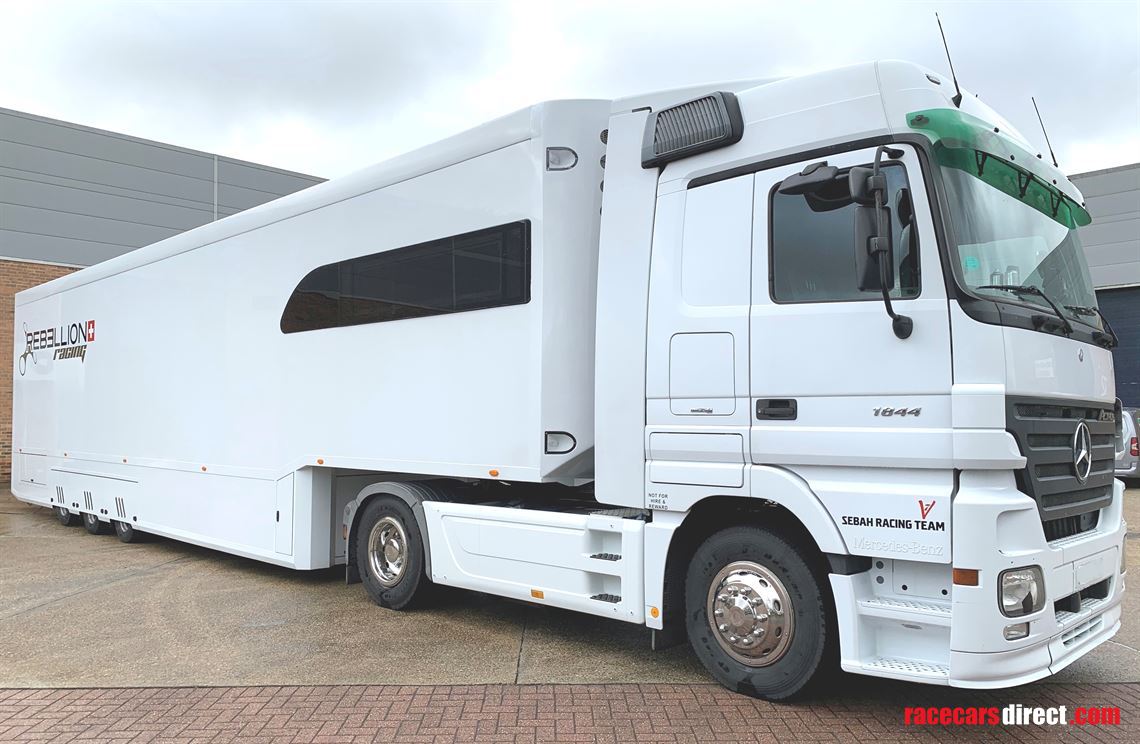 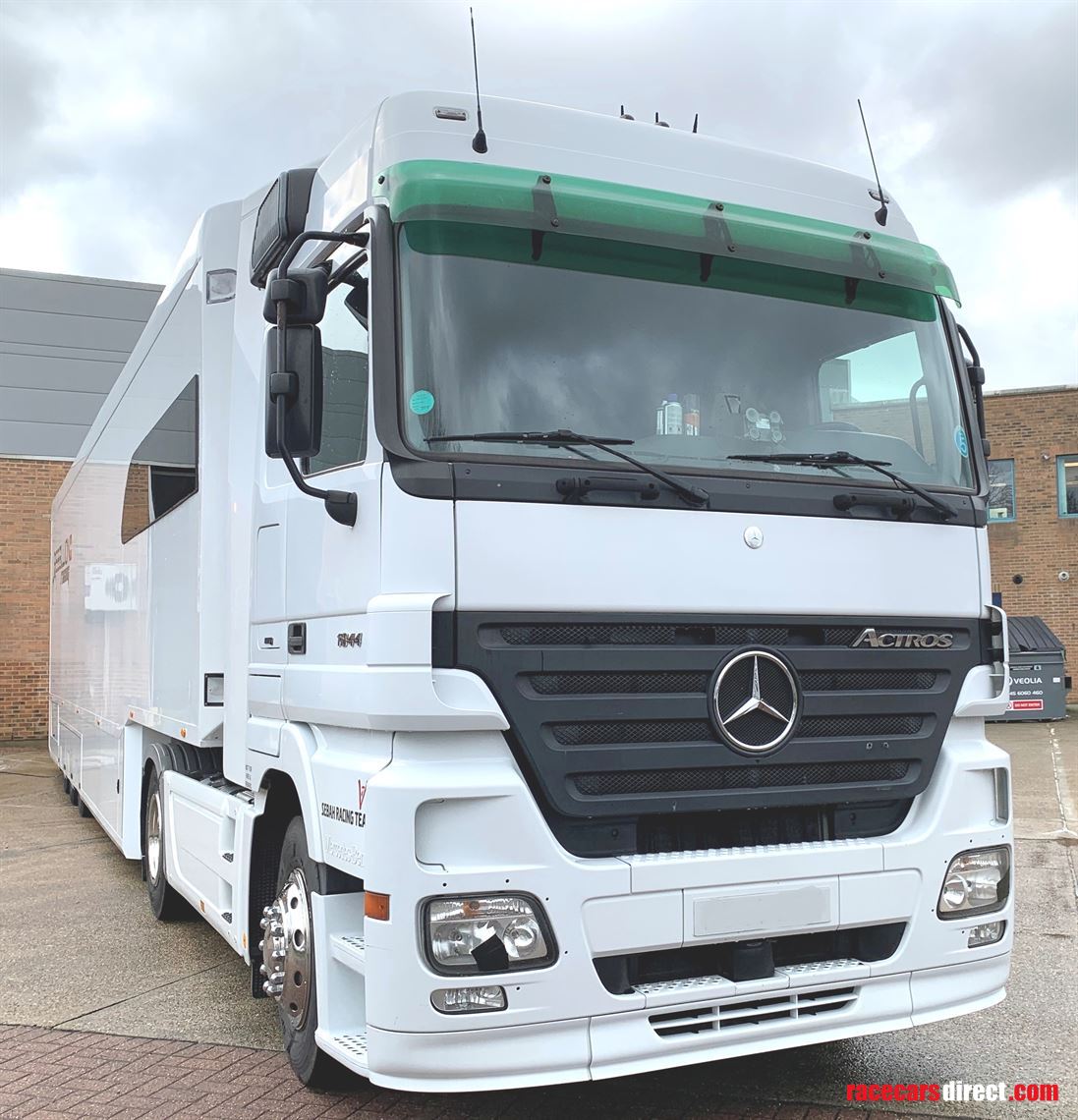 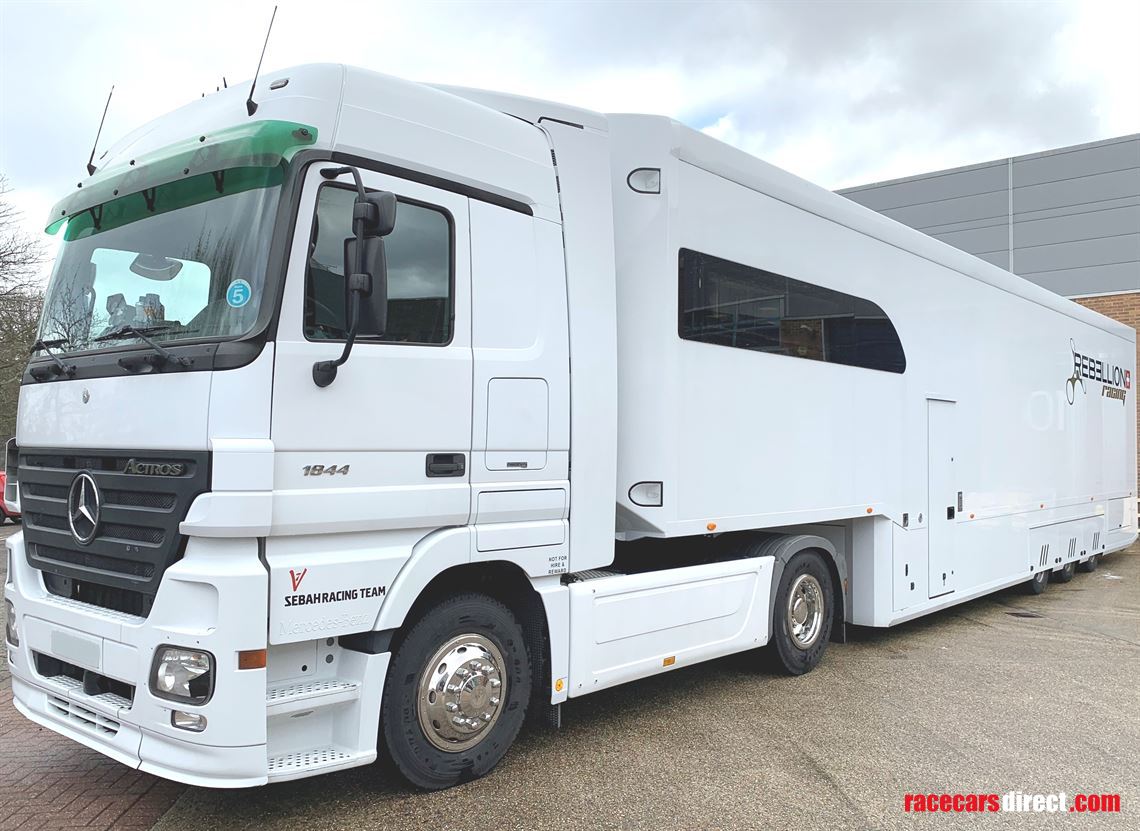 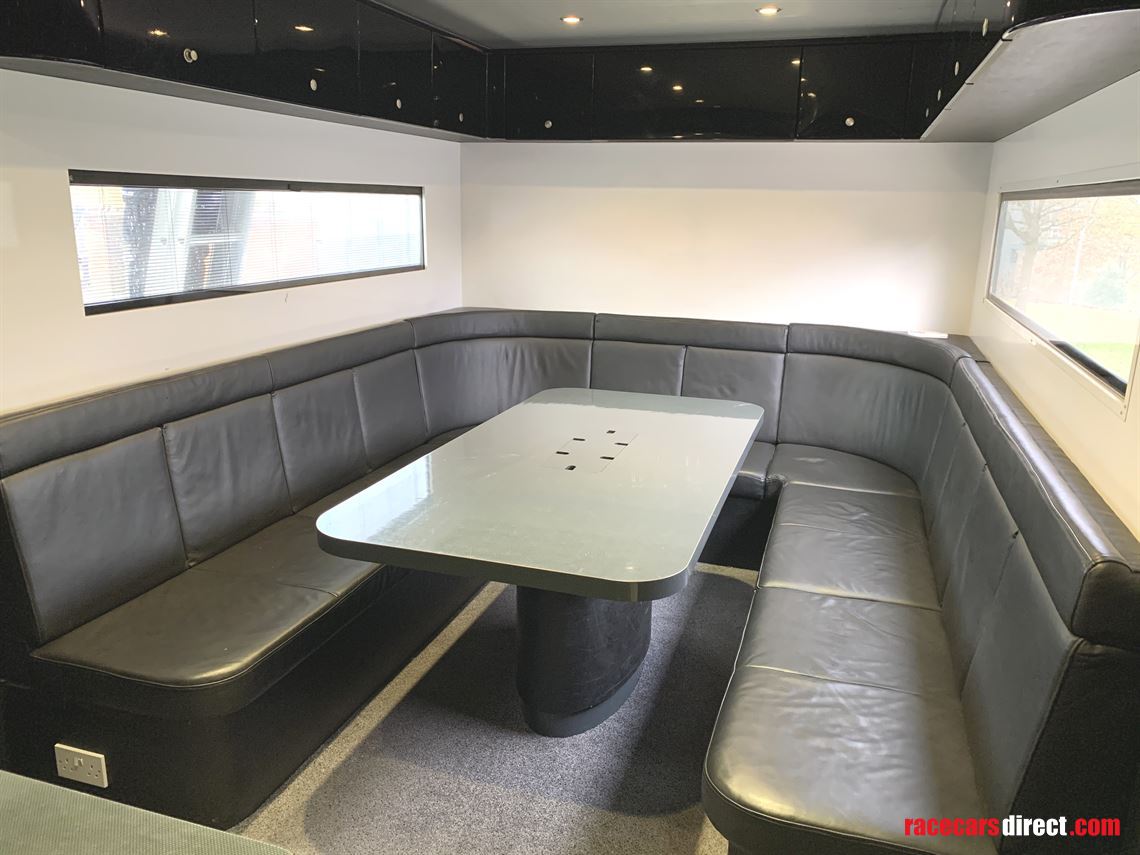 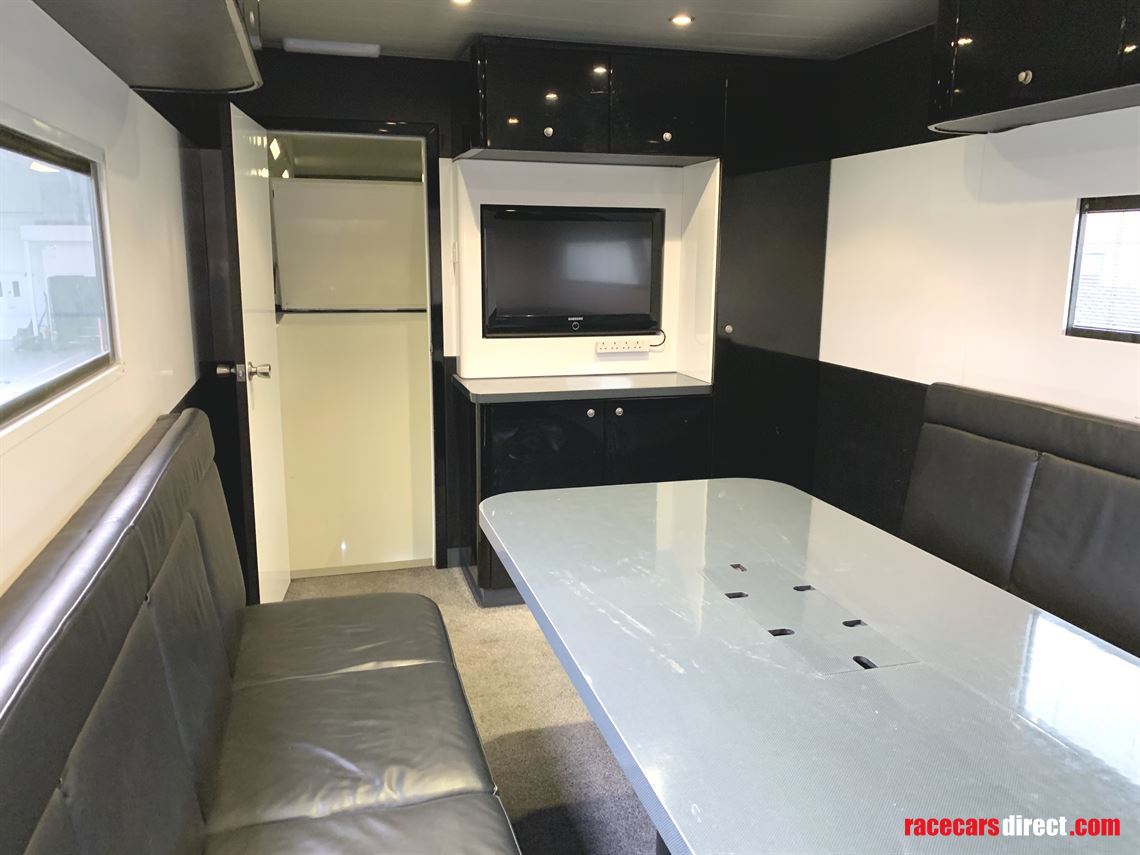 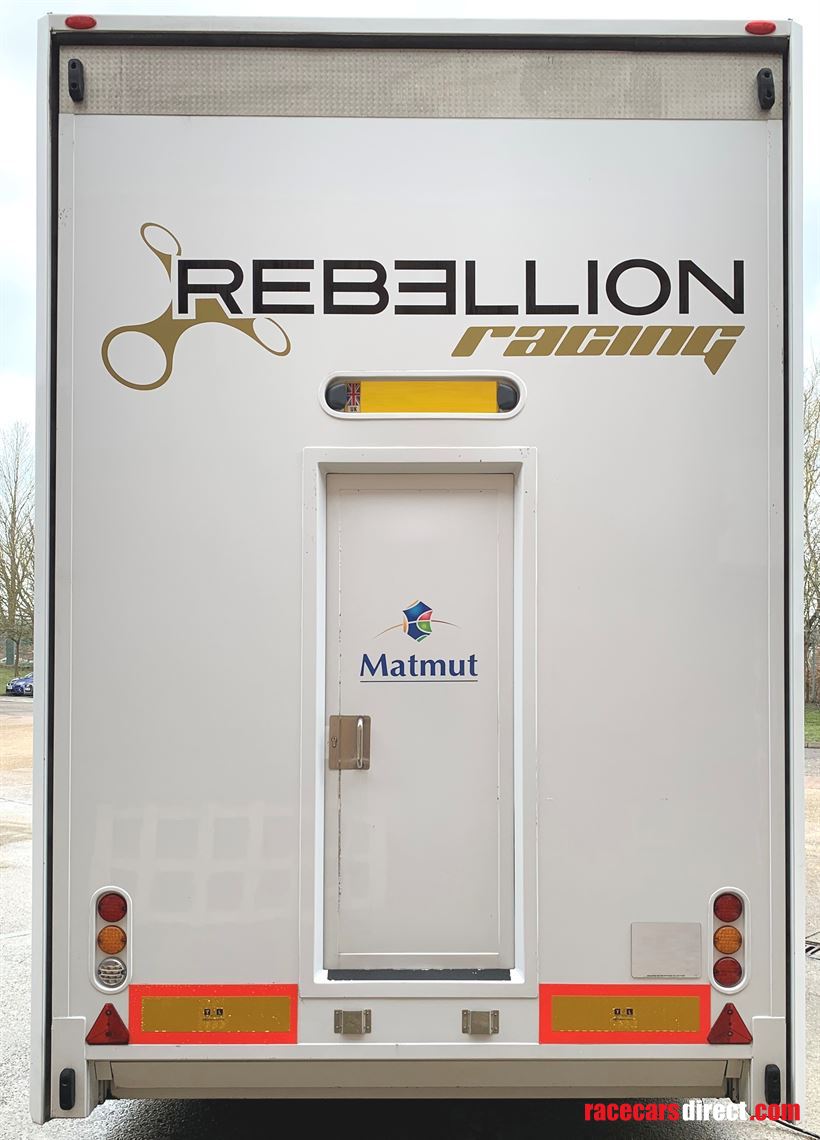 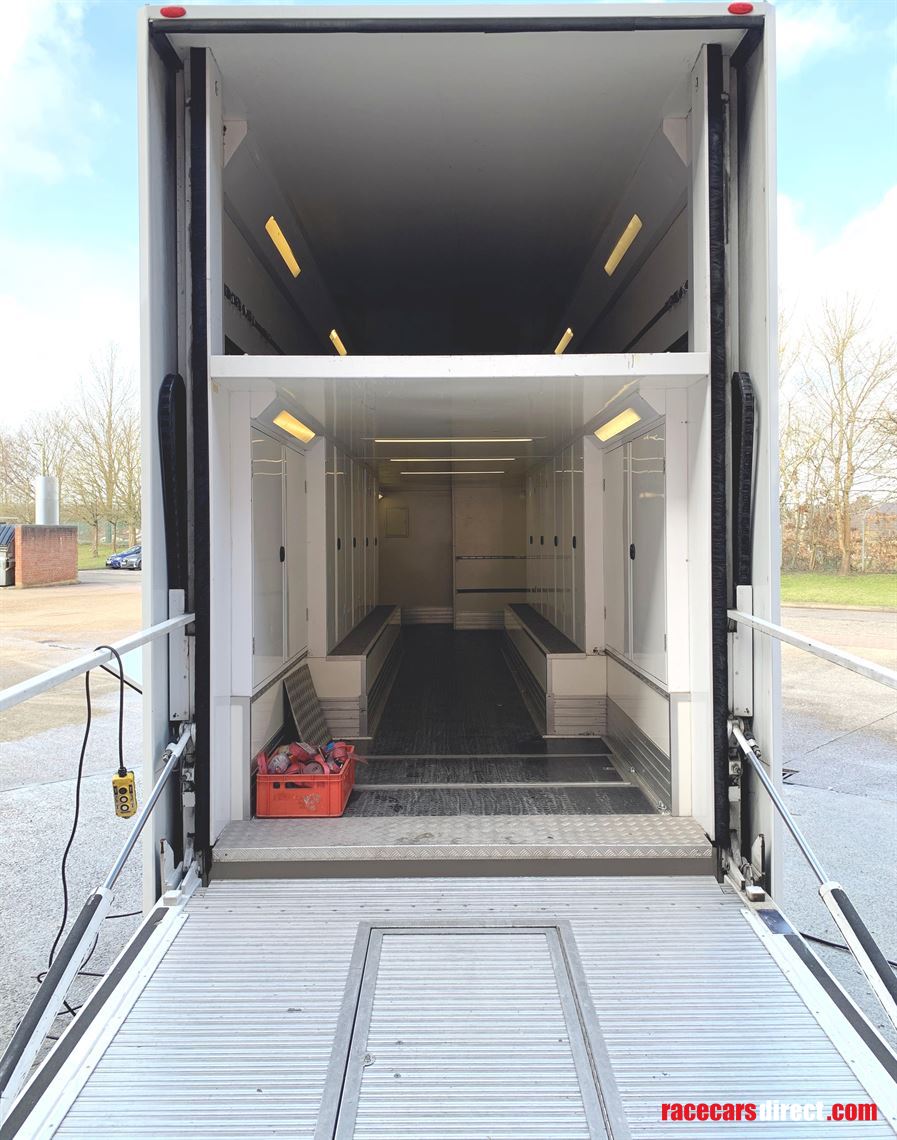 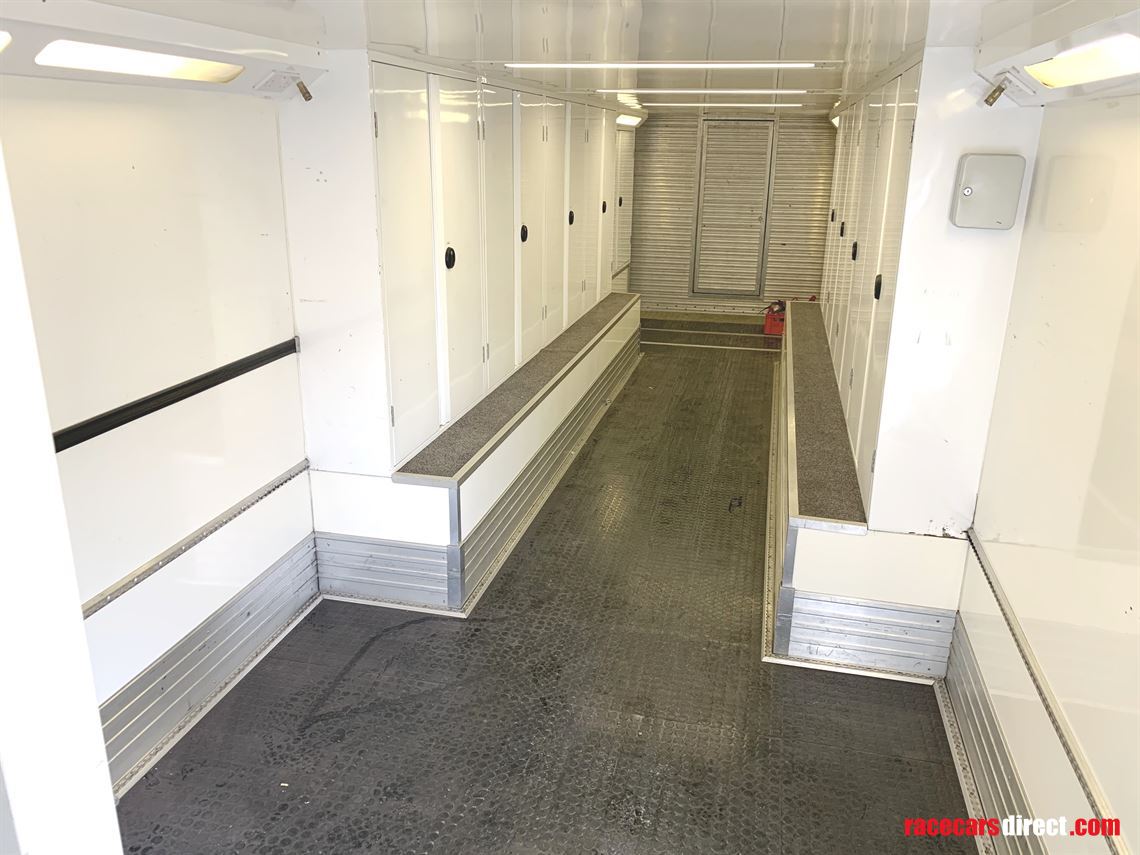 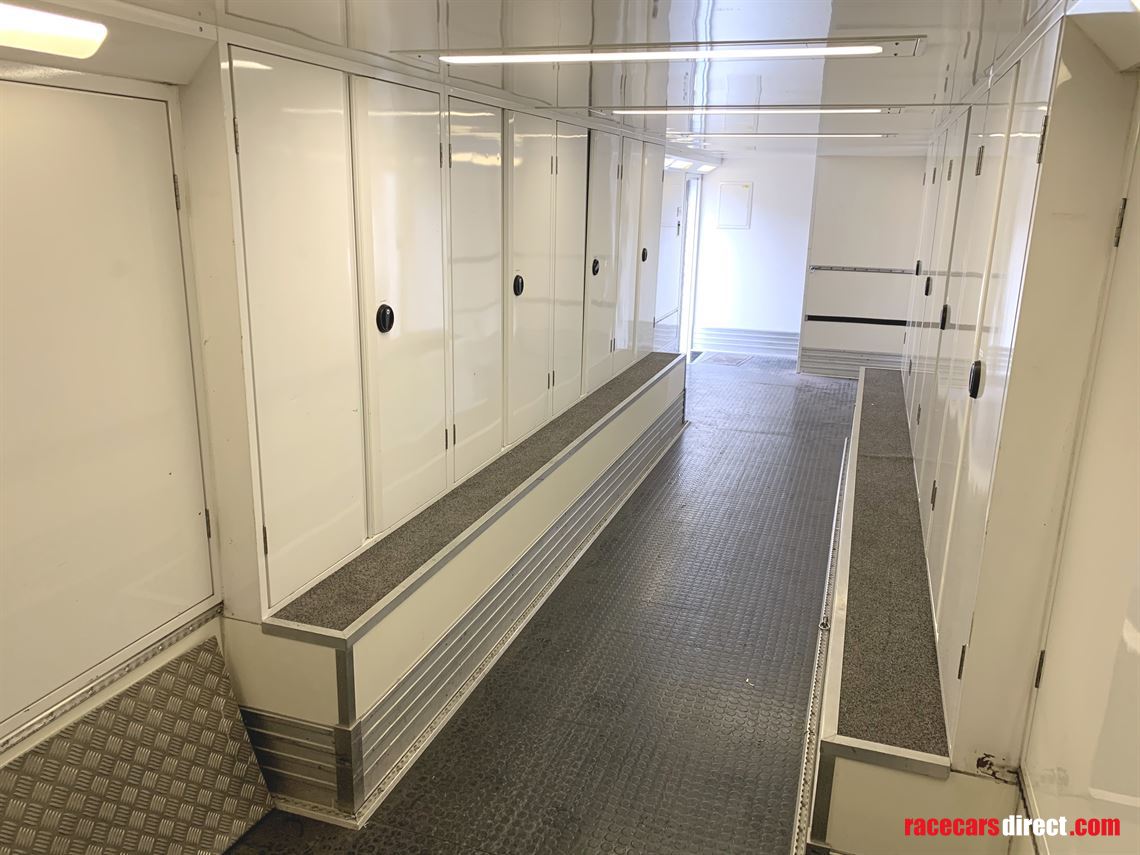 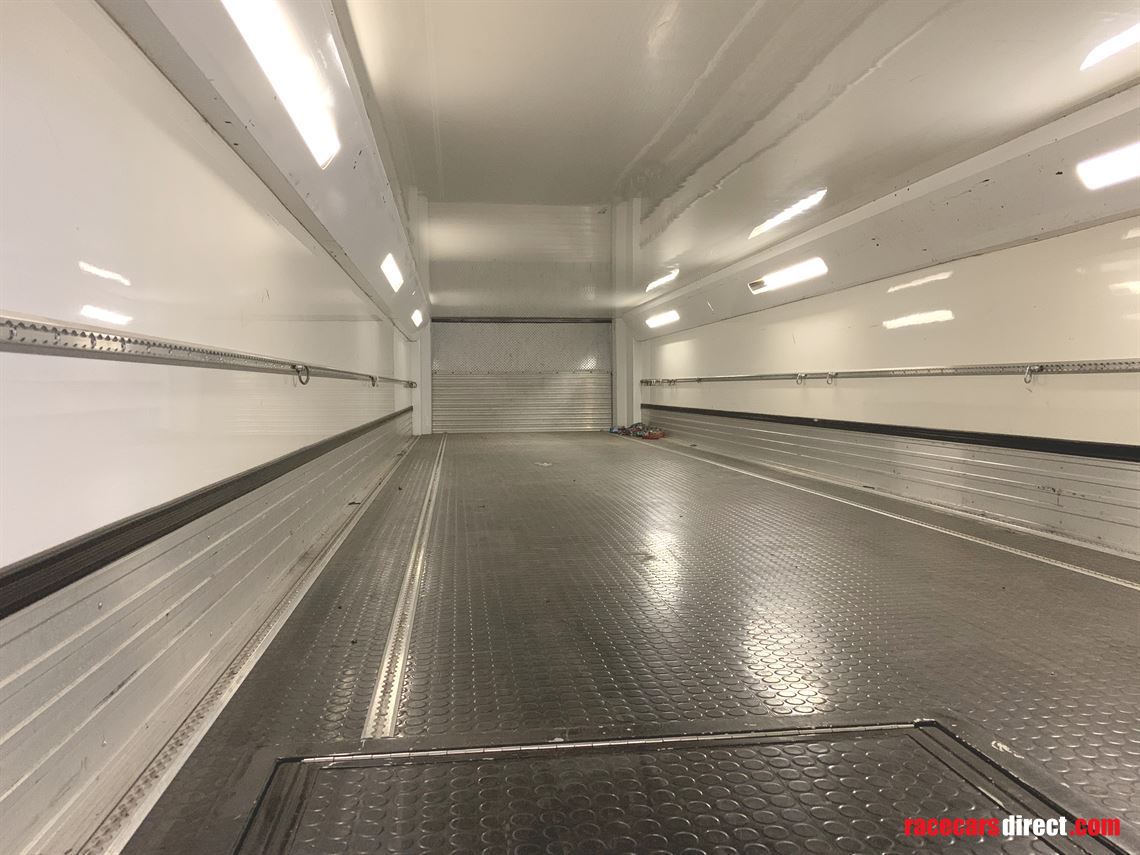 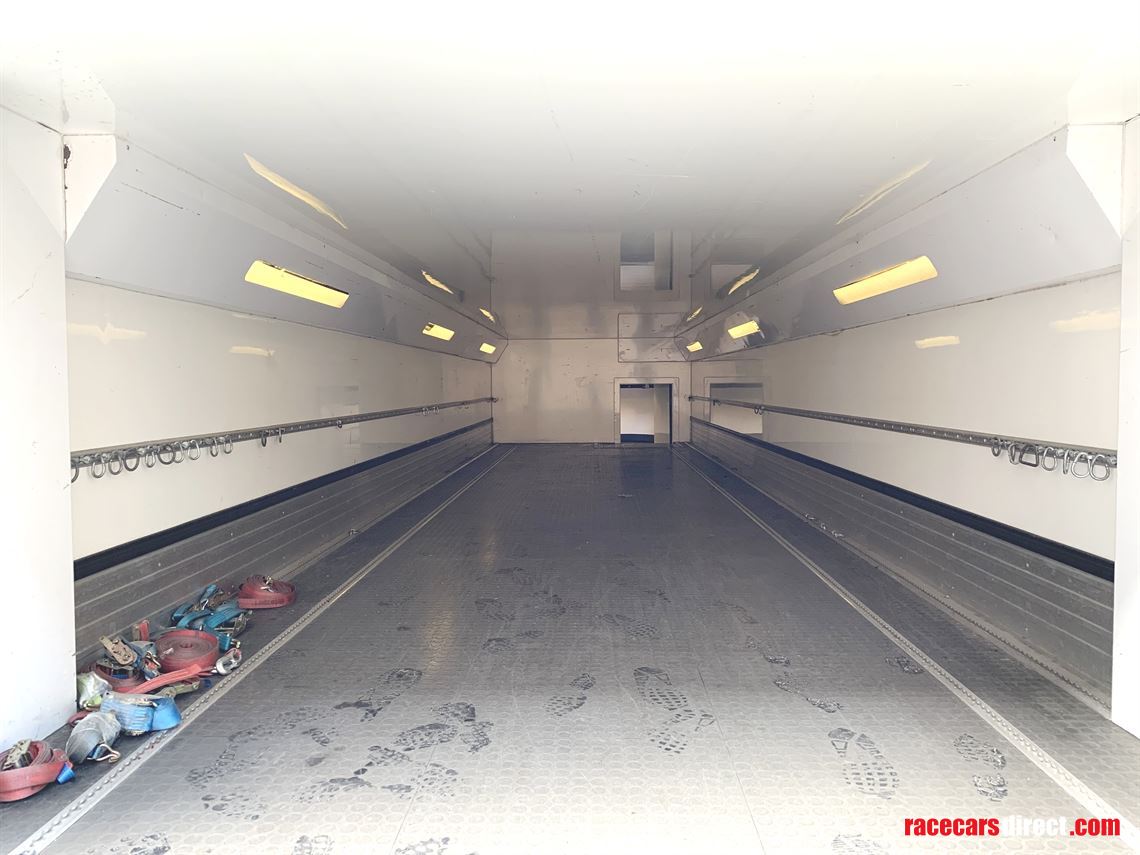 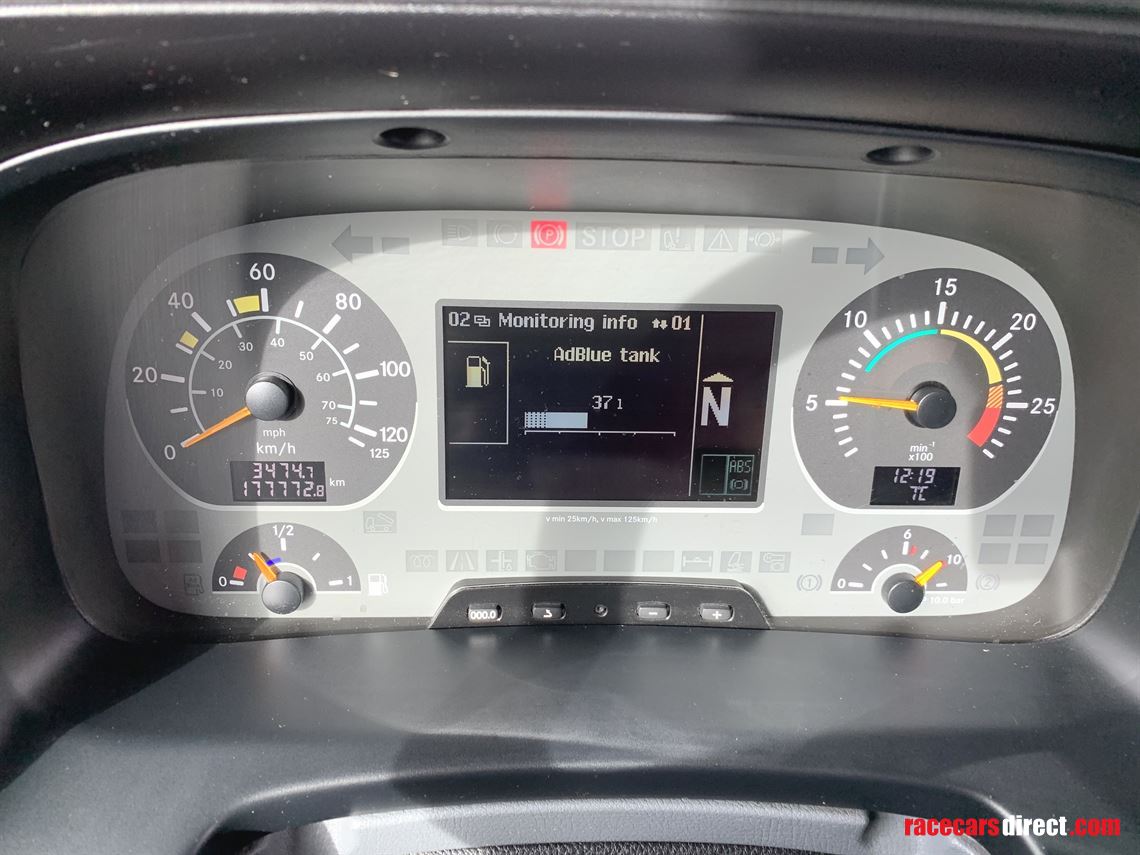 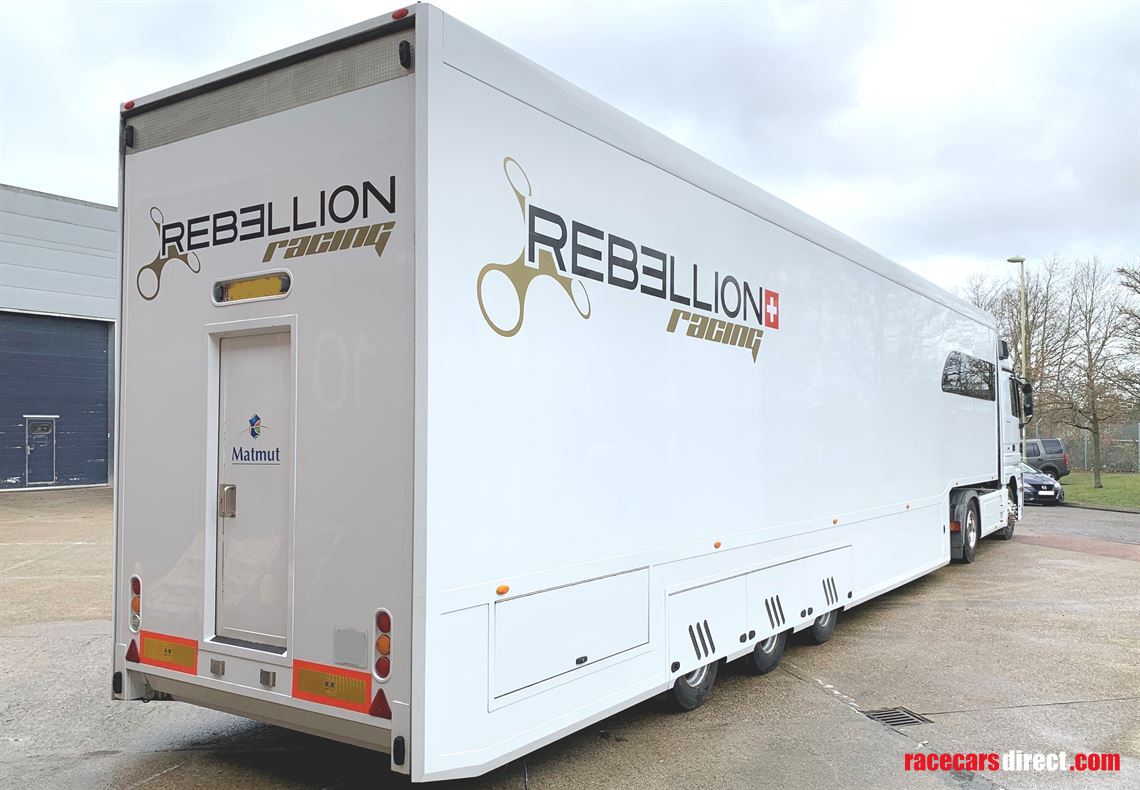 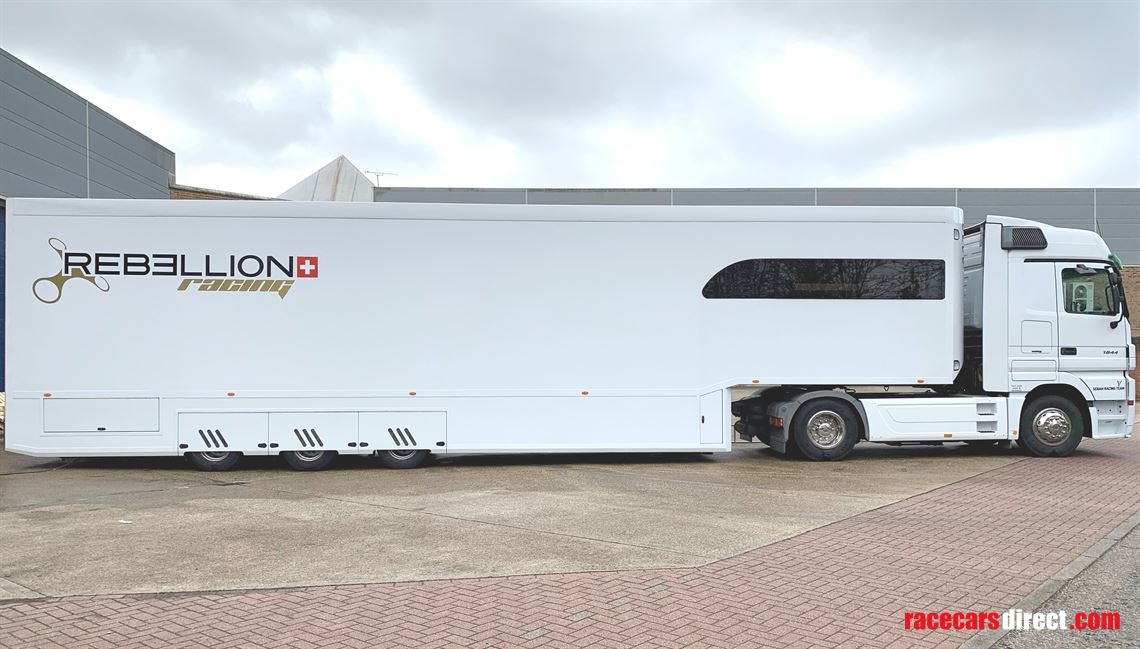 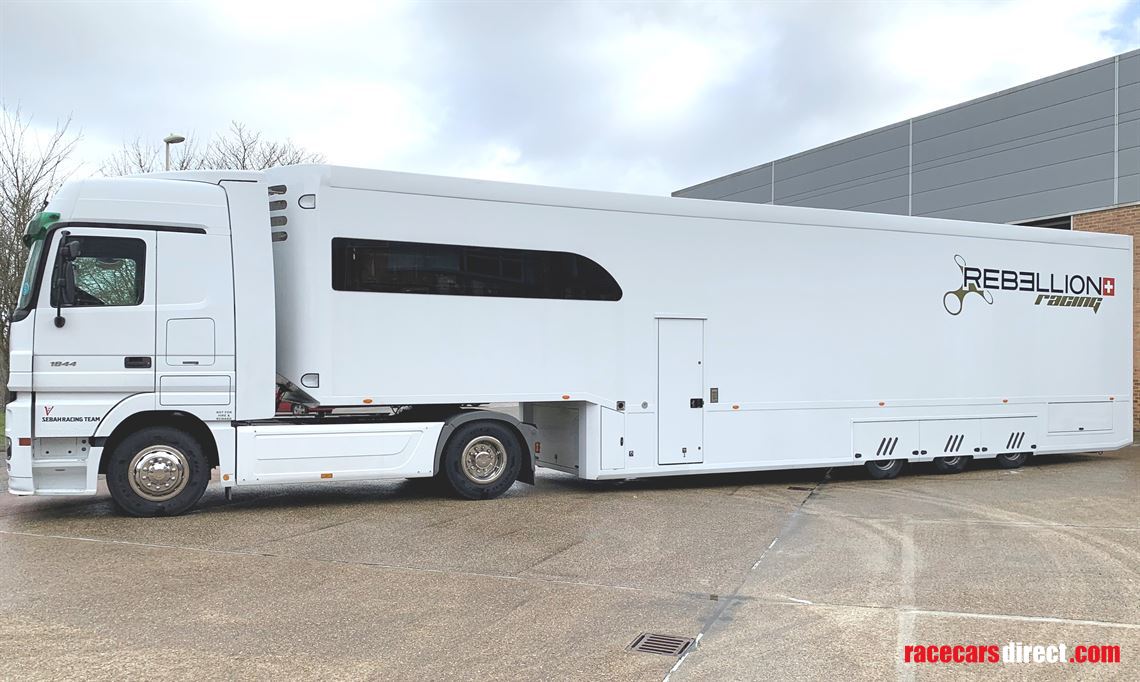 The BrooklandSpeed trailer has been used since new by Rebellion Racing in the European Le Mans Series and the FIA World Endurance Championship (WEC).

The BrooklandSpeed trailer is tri-axle and double decked with a 2T tail lift.  There is 240V electrical hook-up and also an on-board generator that can be used if no hook-up is available.  The trailer has a built-in hydrovane compressor which is used to raise two built-in telescopic radio aerial masts.

There is a U-shaped office which is a great space for drivers to relax and de-brief between time on the track.  The office has a built-in A/C unit which can cool or heat as desired.

The lower deck has built-in cupboards that were used by the Rebellion Racing drivers to store their personal effects and to give them a changing area at the circuit.  For loading, the lower deck has a clear height of 1950mm and at the narrowest point (between the axles) is 1170mm, opening out to 2460mm at the front and the rear.

The Mercedes-Benz Actros 1844 tractor unit is Left Hand Drive.  It was originally registered in Germany, but it was purchased and imported into the UK by Sebah Automotive where it went through British type-approval checking to become UK registered.  The LHD truck has been perfect for Rebellion Racing as the majority of the time is spent driving on European roads getting to and from European circuits.  The Actros has covered less than 178,000km from new and has been maintained by a Mercedes-Benz dealer in the UK.

Price for the combination is £85,000 + VAT.  We might consider selling the two separately if for example the trailer were of interest, but not the truck.

Available to view in the UK.

Multi vehicle car transporter, designed for 10 x Caterham's but will take all types of vehicles